Dillon Gee struggled on the mound early, his teammates struggled all night at the plate, and the Mets turned in another disappointing performance on the unofficial celebration of Kevin Burkhardt Night.

On (unofficial) Kevin Burkhardt Night at Citi Field, Dillon Gee struggled through a strange opening inning, beginning with a trio of softly hit one-out singles that loaded the bases. A wild pitch brought home the game's first run, or at least it was ruled a wild pitch; replays indicated it hit the batter, Garrett Jones, in the foot, though Jones didn't move an inch. 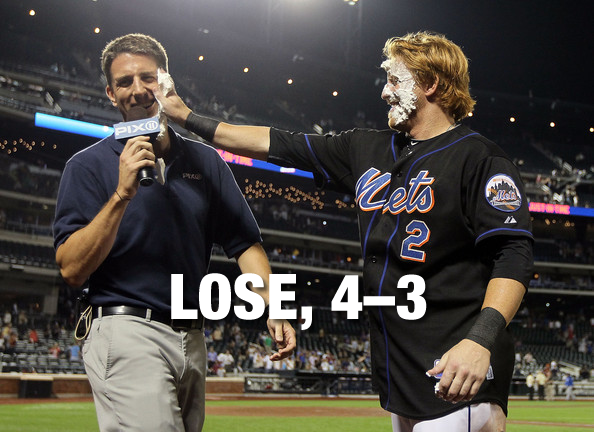 It was all so confusing that Terry Collins ran out to argue the play before realizing the pointlessness of doing so. Meanwhile, the SNY booth debated the merits of wild pitch vs. hit by pitch in this situation, each broadcaster seemingly misunderstanding the point his colleagues were trying to make. It was all quite amusing. You had to be there.

Anywhoozle, Jones made the most of his opportunity with a swinging bunt that brought home another run. Gee then reloaded the bases by "hitting" Reed Johnson with a pitch (the ball may have grazed a fiber on his uniform) before inducing an inning-ending double play.

Gee retired the first two batters in the second before walking Christian Yelich, who then stole second. That put him position to score when Donovan Solano hit a Texas Leaguer just beyond Lucas Duda's reach. I'm calling it a Texas Leaguer because that's what the SNY booth called it. They used the same old-timey baseballism to describe the ducksnort singles of the first inning, and kept mentioning it as they debated the phrase's origin. Again, it was all delightful and you really had to be there.

Henderson Alvarez gave the Mets plenty of chances in the early going, but the Mets generously gave them all right back. In the first inning, a double play off the bat of Travis d'Arnaud erased a Dnaniel Murphy single. A potential rally in the second was quashed by a great play at short by Adeiny Hechevarria and a trapped ball that Wilmer Flores was sure would be caught on the fly but wasn't. In the third, Matt den Dekker beat out a one-out infield single and made it as far as second on a passed ball, but was stranded there when Murphy and d'Arnaud struck out looking. Duda and Flores began the fourth with a walk and a single, then watched helplessly as Curtis Granderson bounced into a double play (the first twin killing Granderson had hit into all year).

It looked like more of the same in the fifth, when one-out singles by Gee (his first hit of the season) and den Dekker were followed by a Murphy groundout. But after a d'Arnaud walk, Duda singled to center to bring home a pair of runs. Alas, even this rally was diminished, as a long fly ball to left-center was snagged at the fence by Marcell Ozuna. The Mets were then retired in order for the first time in the sixth.

Gee was seen slamming his glove against things in the dugout following his sloppy second inning, but looked more composed on the mound thereafter. After another groundball double play contributed to a scoreless third, Gee retired the Marlins in order in the fourth. A walk to start the fifth was rendered harmless by yet another GIDP, and the sixth brought another perfect frame.

But in the top of the seventh, he allowed a leadoff a single to Hechevarria, who then moved up on a sac bunt. Gee's night ended after he struck out pinch hitter Enrique Hernandez, as Collins turned to lefty Josh Edgin to face Yelich. The move backfired when Yelich hit a long run-scoring double beyond the reach of Kirk Nieuwenhuis. Carlos Torres fanned Solano to end the inning, but the tack on run would prove costly.

Other members of the Mets' bullpen were more effective, though just barely. Jeurys Familia took the mound in the top of the eighth and allowed singles to the first two batters before eventually loading the bases with two outs, but escaped danger by getting Jeff Mathis to ground out. (Mathis barreled into first, not so much sliding as tumbling end over end like he was a boulder chasing Indiana Jones.) Jenrry Mejia pitched the ninth and, despite giving up a single and walk with two outs, put up a zero.

Their teammates, meanwhile, could not manage so much as a single hit against the Miami relief corps. The first man out of Miami's bullpen was Mike Dunn, who walked pinch hitter Eric Campbell but retired the next two batters in the seventh. A.J. Ramos was then brought in to face d'Arnaud, and he fanned the catcher on three pitches. Chris Hatcher got the call in the eighth and walked leadoff man Duda, who then moved to second on a grounder, scampered to third on a wild pitch, and scored on another grounder to cut the Marlins' lead down to one run.

This was as close as the Mets would get. Brought on for the save in the ninth, Steve Cishek retired the Mets in order to conclude the season series between Miami and New York.

About those Kevin Burkhardt tributes: It was nice to see a passionate, organic expression for something Mets-related this season. Citi Field has been bereft of such expressions since R.A. Dickey won his 20th game in 2012. Burkhardt visited the SNY booth, spending far more time there than Bud Selig did the night before, which seemed more than right.

The thing I was struck by during the retrospectives of Kevin-Con was how much time has passed since he joined the broadcast team and all that has changed since then. Asked about his favorite players to work with, he uniformly named ones who are not with the Mets anymore, either retired or scattered to the four winds. I heard him rattle off names like Pedro Martinez and Mike Pelfrey and Billy Wagner and thought to myself, Remember when you rooted for those guys Like, every day?

Asked about the most fun segment he ever filmed, he picked one in which Jose Reyes attempted to teach him Spanish. When SNY aired that segment, showing Burkhardt with Reyes back in in a Mets uniform joking and smiling, it felt like yesterday and felt like a million years ago all at once. I remembered that he was the first baseball player my daughter recognized, that as a toddler she would see anyone with dreads and squeal Jose! 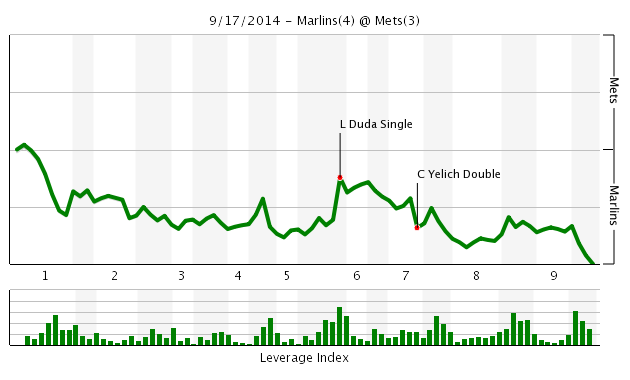