Mets vs. Nationals Recap: Mets mashed at the LaRoche motel

A three-run blast by Adam LaRoche (of course) was enough to spell doom for the Mets, in their fourth loss to Tanner Roark and their 14th to the Nats this season.

Share All sharing options for: Mets vs. Nationals Recap: Mets mashed at the LaRoche motel

Earlier today, the Mets announced both GM Sandy Alderson and manager Terry Collins would return next year. Given their team's murky financial situation (which Alderson insists is "flexible," a carefully chosen adjective that could mean anything), both men should be judged on their ability to prevent serious harm. Each has made their share of mistakes (Chris Young, bunts and such) but none that have hamstrung the team in the long term. That is setting the bar pretty low, granted, but by this measurement Alderson and Collins have each done a decent job at their respective positions.

Alderson's new contract extension means he will mold this team for at least another three years. With the Mets in Washington, the GM made sure to note that "the Nationals are the measure by which we are evaluated." On the surface, this could simply mean that the Nats are now the class of the league. He may have also meant this in the sense that if they hope to contend, the Mets—who we have to assume are flat broke until they prove otherwise—will have to build a winning lineup in the same slow, unglamorous process used by the Nats since their relocation to Washington.

However you choose to take Alderson's words, tonight's game, like every other game played against Washington this year, proved the Mets still have quite a way to go. 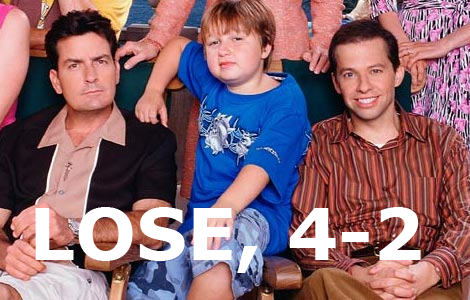 Matt den Dekker tucked a double down the right field line to start the proceedings, but Nats starter Tanner Roark shrugged it off by retiring the next twelve batters in order, with some help from this defense. The top of the second ended with a nifty diving catch by Jayson Werth, while the third concluded with Denard Span running down a den Dekker fly and crashing into the fence in the process. (Span left the game after that frame, a potentially costly injury for the playoff-bound team.)

Bartolo Colon followed a similar path on his initial innings. He allowed a leadoff single and issued a two-out walk in the first, but stranded both runners, then set the Nats down in order in the second and third. Like Roark, Colon also benefited from his defense, as Daniel Murphy fielded and fired an Asdrubal Cabrera bunt attempt to end the bottom of the third. He gave up a single a walk with one out in the fourth but escaped danger, ending the frame with a strikeout of Wilson Ramos.

All remained quiet until the top of the fifth, when the Mets finaly reached base again via a leadoff double by Wilson Ramos. One out later, Kirk Nieuwenhuis knocked him in with a ground-rule double in the right field corner. But after this brief hiccup, Roark picked up where he left off by setting down the next two batters, then retiring them in order once more in the sixth.

Given a lead, Colon rewarded himself by failing to cover first as Lucas Duda made a diving stop on a Kevin Frandsen grounder, resulting in an infield single. It's impossible to say what might have happened if he'd covered the base, but it is possible to say that his outing went south quickly in the immediate aftermath of the play.

After Roark bunted Frandsen over, Michael Taylor (sub for the injured Span) drove him home by sneaking a double past Duda. One out later, Colon looked out of sorts while walking Werth, who he'd struck out in his previous two at bats. If you know that Adam LaRoche was the next batter, then you probably already know that he crushed a three-run homer to deep right field because that's what LaRoche does against the Mets, today and every day, now and forever.

The Mets efforts to launch themselves back into this game fell short. In the seventh, a one-out Flores single was followed by a Curtis Granderson double off the scoreboard in right, and also brought Roark's evening to an end. Lefty Ross Detwiler was the first line of defense out of the Washington bullpen, and he loaded the bases by walking pinch hitter Eric Campbell, which permitted Rubjen Tejada to bring in a run with a sac fly. Then, a fast-moving game got real un-fast, as the Nats brought in a new pitcher, Aaron Barrett, who walked pinch hitter Bobby Abreu to load the bases again. Barrett was replaced by the fourth pitcher of the inning, Jerry Blevins, who got another pinch hitter (Anthony Recker) to pop out and finally end the inning.

Andres Torres took Colon's spot on the mound in the seventh and tossed a scoreless frame. Josh Edgin got the call in the ninth and watched Duda misplay a grounder that allowed Ian Desmond to reach safely with one out. Desmond then stole second and advanced to third when d'Arnaud's throw sailed into center. Edgin fanned Bryce Harper and gave way to Daisuke Matsuzaka, who struck out Ramos, thus keeping the deficit at 2 runs.

While the Mets relievers were putting up zeroes, though, the Mets batters were doing the same, despite a golden opportunity in the eighth. After Tyler Clippard came on to pitch that inning, New York got a break when Bryce Harper couldn't quite line up a long fly ball off of Travis d'Arnaud's bat, his misjudgment putting the catcher on third with one out. (Initially ruled an error, the official scorer later deemed a triple, as well he should.) The Mets gave this break right back when Duda lined out to Harper and Flores struck on a high hard one.

Drew Storen offered few such opportunities in the ninth, as he struck out Granderson and Campbell to start the inning. Tejada snuck a single past third base, but Storen induced a grounder from Bobby Abreu to end the game. This marked the Mets' fourth loss to Tanner Roark this season, and their 14th to the Nationals in 17 games. I know what you're saying: Only 14?

To return to my earlier point about Alderson's remarks (in improv, this is called a callback!), I'd like to point out that the Nats relocated to DC 10 seasons ago. If we take 2009 as the Mets' first real In The Wilderness season, it means we have at least 4 years to go. And that assumes the Mets have even Nats-level money to spend, which is a Big If right now. By then, though, Alderson will be gone and the Mets will be someone else's problem. Considering the path the Wilpons have put the franchise on, the Mets will probably be in someone else's city, too. 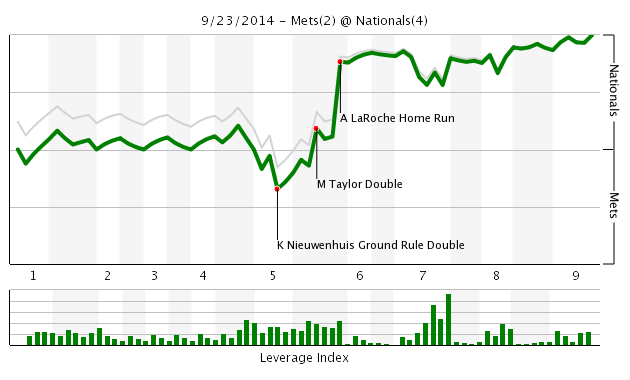