Wilmer Flores was lauded as an offensive prospect but has struggled at the plate in his major league career. Despite this, he still has the ability to be an above-average offensive player in the big leagues.

Share All sharing options for: Mets must remain patient with Wilmer Flores's bat

The Mets have become accustomed to rookie pitchers coming into the big leagues and achieving—and often surpassing—reasonable expectations. Because of how successful many of their pitchers have been, it is easy for fans and media to be disappointed when rookie hitters come up and struggle to begin their careers. While opinions on Travis d’Arnaud have turned drastically since his performance following his stint in the minors, many remain underwhelmed with what they’ve seen from Wilmer Flores. Fans should not overreact to Flores's struggles, and should be as patient with him as they were with d'Arnaud.

Below are the statistical lines for three rookies this season.

Player A is one of the premier young shortstops in baseball. He is 21-years-old and has proven that he can handle the defensive responsibilities that come with being a shortstop. He has been given all the opportunities in the world this season—evidenced by his 504 plate appearances—yet has struggled at the plate. This despite being one of the best offensive prospects in the game, coming into the season as the number two overall prospect according to Baseball Prospectus. Player A is Boston Red Sox infielder Xander Bogaerts.

Player B is an outfielder capable of playing center but destined for a corner spot. BP scouted him as one of the best bats in baseball coming into the season, writing: "Elite hit tool potential; natural feel for barreling the baseball; elite hands; elite bat speed… batting title future." He is 22-years-old and has been perceived by many as major league-ready for the past two years, and he came into the season ranked as BP’s number 3 overall prospect. Despite hitting a home run in his first major league game, he has struggled to hit for average or power in his opportunity in the majors. Player B is St. Louis Cardinals outfielder Oscar Taveras.

Player C’s stat line should look familiar. He is an infielder who just turned 23 and who had a strong reputation with the bat in the minors. He has dominated Triple-A but struggled to make hard contact consistently at the major league level. BP ranked him as the number 71 prospect in baseball coming into the season, although he failed to make any other major publication’s top prospect list. Player C is Wilmer Flores.

The Mets' usage of Wilmer Flores has left something to be desired.

Much of the focus surrounding Flores coming into this season was on his glove and where his defensive home would eventually be, with most assuming that his hitting ability would make him valuable as soon as this year. As the season progressed, Flores has failed to hit for average or power while barely getting on base, and there are now doubts as to whether or not he can actually be an above-average major league hitter.

Those with doubts about Flores need to realize that not every hitter is Yasiel Puig, a stud who comes in and makes professional pitchers look like little leaguers. When it comes to hitting prospects, Flores has always been solid, but nothing close to Bogaerts or Taveras. Together, Bogaerts and Taveras were considered potential generational bats, perennial MVP and All-Star candidates because of how adept they were at mashing baseballs; Flores’s best-case scenario was as a .300 hitter with average power. Yet, just like Flores, they have struggled in their transition to the major leagues.

It is possible that all three end up becoming busts, that what they are exhibiting this season is what they will be for the rest of their careers. It is in prospects’ nature to bust, as a multitude of players capable of hitting Triple-A pitching struggle to make the transition. However, they are also evidence of how prospects who are considered high-level hitters often fail early in their careers. Bogaerts was the most highly regarded of the three, yet has failed just as much as the other two, in an even larger and more concerning sample size.

The point here is that, even though fans have watched Flores play for what may feel like an extended period of time, it is a much smaller sample size than it seems. There are plenty of reasons to be concerned about Flores’s hitting, but his numbers at this point in his career shouldn’t be one of them.

Beyond Flores’s poor patience, which at this point in his career is unlikely to change, there are a number of troubling aspects evident with his approach at the plate. One of the biggest concerns is that Flores doesn’t attack pitches when ahead in the count, and is often beaten by fastballs in situations in which he should punish them. He also appears to never swing very hard, instead using his natural feel for the barrel to poke the ball across the field, which has resulted in a surprising number of infield hits for a player with his speed. This is also concerning given the hitter-friendly environment in Las Vegas, to which many fans attribute his Triple-A success given Flores’ contact-first approach.

The question then becomes whether these issues at the plate mean that Flores will never become a good major league hitter, or if they can be attributed to his youth and lack of major league experience. There is no way to definitively know right now, but when pondering the answer, it is important to understand that he has a lot going against him as a young player. 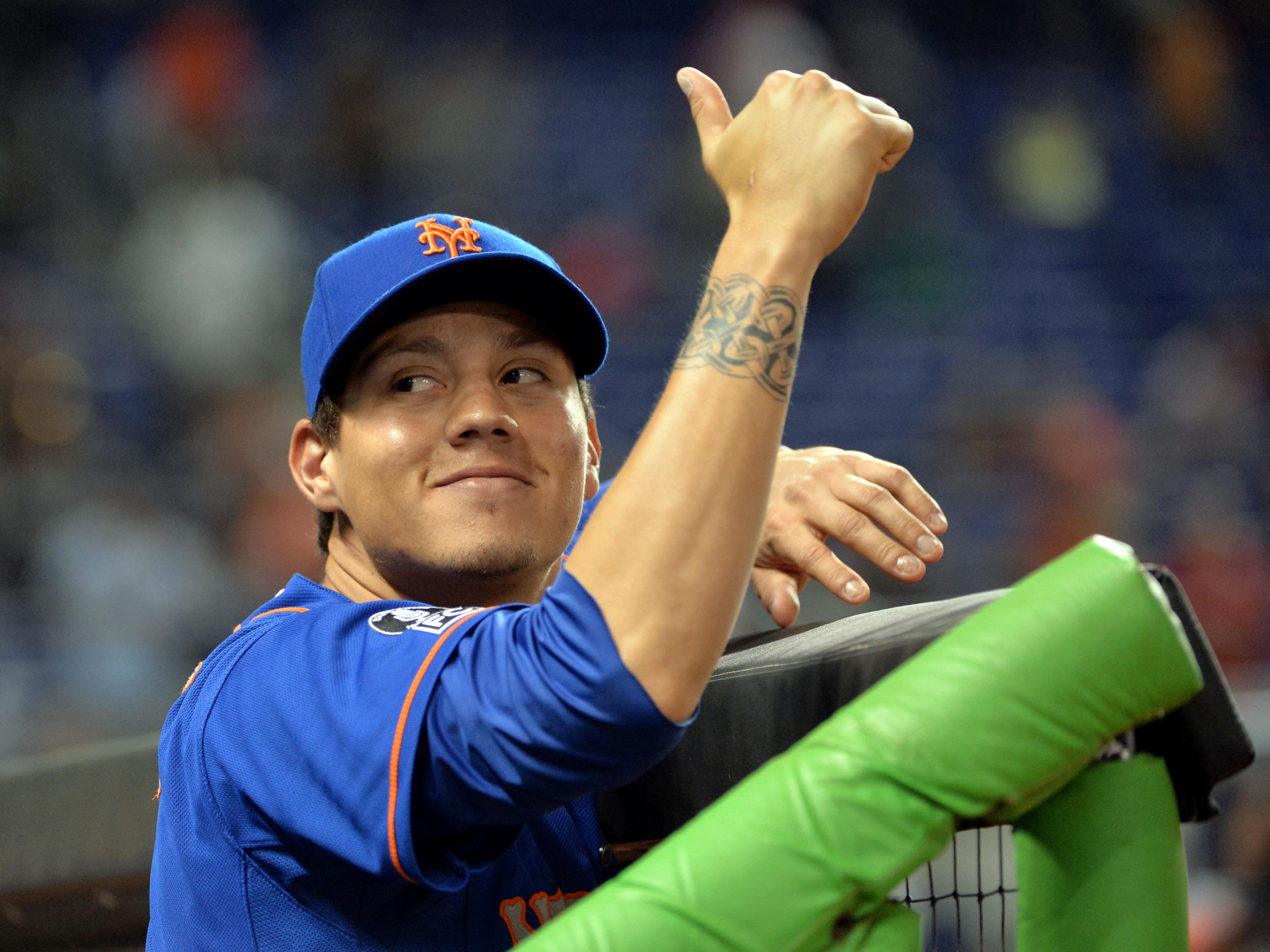 Flores has always been lauded as an intriguing offensive prospect, but his defense has been consistently bashed, and this year he is being asked to play one of the most demanding defensive positions on the field. While Flores pretty clearly shouldn’t be the shortstop of the future, he has been surprisingly competent there, exhibiting a strong throwing arm, soft hands, and better-than-expected (yet still unspectacular) range. While Flores deals with the difficulties of being a young major league hitter, he also has to play a position that he hasn’t manned in years and that he isn’t necessarily capable of playing at this level. It would be reasonable to assume that Flores’s focus on his defense and his struggle to find a defensive home in the big leagues is affecting his production.

Flores also has to struggle with the fact that he has been designated by Terry Collins as the eight-hole hitter, despite having a better pedigree than players such as Matt den Dekker. With the pitcher on deck, opposing teams are less inclined to give Flores pitches in the zone that he can square up. Flores has also never been a patient hitter, and with pitchers pitching around him, Collins is putting Flores in a position to fail.

Even with these factors going against him, Flores has been able to keep up statistically with two of the premier hitting prospects in the game. It is quite possible that many of those concerned with Flores are correct, that he is a "Quadruple-A" player with a flimsy swing. However, he has shown enough with the glove this season to prove that he could become a reliable second or third baseman; and, considering his youth and others factors going against him, writing him off as an offensive prospect at this point would be silly.

Flores still needs to show more at the plate before he can be considered a definitive part of the Mets' future. Still, in a franchise desperate for young, controllable offensive assets, Flores could be an integral part of the team's long-term plans. What Flores does in the next year—whether he continues his mediocre play or breaks out and shows signs of his potential—will be crucially important to the Mets’ future.