Church was the Mets second round pick, and 48th overall selection, in the 2013 draft. The Nevada righthander struggled during in his first month in Kingsport, but when I talked to him he was in the midst of a strong run of starts for the K-Mets. We spoke about the adjustments he had made during the season and his offseason plans.

On the improvements he's made during the 2014 season

"I worked with [pitching coach Jonathan] Hurst and everyone and they changed some mechanical stuff. [Manager Jose] Leger's been talking to us about the mental side, and I've learned more about hitters and attacking earlier in the count. It's all been [about] collectively growing as a player this season."

On his mechanical adjustments

"I was throwing across my body, dropping my arm a little bit kinda since I got drafted. So we worked on just staying towards home plate, getting my arm up and getting the ball down, and getting more downhill plane."

On what the organization has him working on at this level

"Going out there and getting used to playing everyday, getting all your stuff done. It's a lot different from high school where you pitch and then you got a week off. So getting out there, throwing every fifth or sixth day, stuff like that. Their big focus is throwing strikes and keeping the ball down."

"I like to think I can throw a lot of strikes. [I] don't like walking a lot of guys. I throw a lot of fastballs and try to get them to put it in play. If I get a chance to strike them out, I like to go to my curveball and use that as my out pitch."

On his draft day experience in 2013

"It was very exciting. I was at my high school field playing catch and got a call. My agent told me, "hey the Mets are thinking about taking you, are you watching the TV?' I said not right now. He said, 'well go find a TV.' So I went inside the clubhouse at my high school field. My whole team was there playing a game. [When] it happened, my whole team heard it happen. They ran inside, everybody gave me hugs. So it was a pretty cool experience."

"Well hopefully we can finish strong, make the playoffs and maybe win a championship here. After that, just work hard, do the same thing I did last year and keep my arm in shape and get ready for Spring Training." 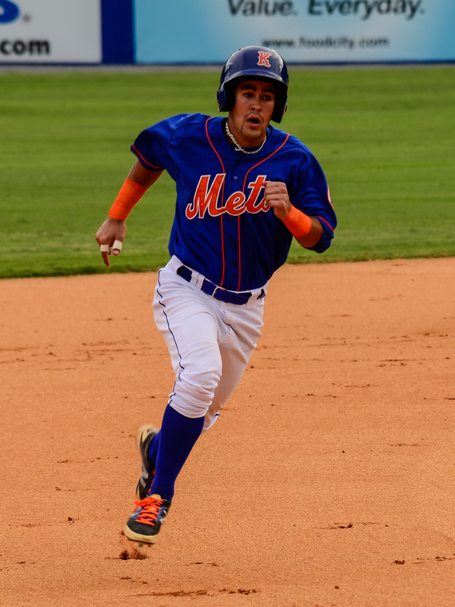 Guillorme was the Mets tenth round pick in the 2013 draft out of Coral Spring High School in Florida. Considered to be one of the best defensive shortstops in the 2013 draft, I took the opportunity to pick his brain on how he developed his chops at short. We also spoke about his (rather extensive) offseason workout regimen.

On when he knew he was a good defender

"Ever since I was little defense was something that I really focused on, because I'm not the biggest guy, I'm not the fastest, so there was something that had to stand out for me to get here. Even when I lived in Venezuela before I moved here when I was 12, that's all I practiced with my coach. It was mostly defense and then my hitting. And it ended up paying off, so I have always known that I was that type of player."

On how he developed his defensive skills

"It goes back to being a kid again. In Venezuela I couldn't go outside. It wasn't safe, so I had a wall in my house and I would just throw a ball against it all day pretty much, no glove, no nothing. Everything with quick hands just has to do with the wall. And then the soft hands, that's really something that you can practice, but if you don't have it you really not going to get too much more out of it."

On natural ability versus practiced skills

"I feel like most of it is natural. But you can have a natural gift, [and] if you don't won't work with what you've got, you're not going to get better at it. Which is what I've done my whole life. Even if I'm good at defense, that's the thing I'm going to work on too. Because if you don't, you're going to have it, but it's not going to be special."

On his improvements at the plate in 2014

"It's just a more consistent swing really. Last year I was all over the place, going on my front foot, getting up. Now I'm staying back a little more and using my legs. Since I knew that was the thing I struggled with, it's really what I worked on the most in the offseason besides getting faster and stronger."

On his process and goals for the upcoming offseason

"My hitting and my speed always have to be the things I work on the most. Last year I woke up at ten, worked out until one at Bammarito. There's a couple major leaguers that work out there so I also get the experience and talk to them. And from that I go [work at] Nova Southeastern University. After that we'll go to my old high school and practice with them, and then after that we'll go back to the cages where I help out and work at night."

"Yeah...in the offseason all your friends are out of state at college or still in high school, so they're in school and have practice and stuff. It's better than just being at home." 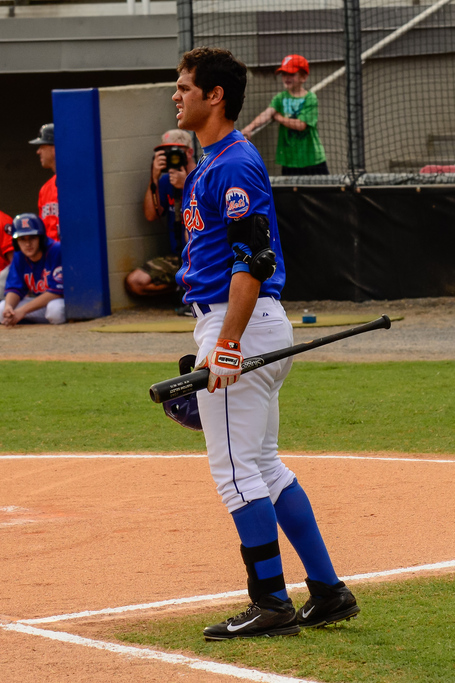 Becerra was the "non-elite prospect" in the R.A. Dickey deal, though he has since developed into quite a nice one. Like Church, Becerra struggled a bit in his first taste of Kingsport, but when I sat down with him, he had hit six home runs in the previous month. I asked what had changed for him and what it was like being part of a major trade when he was so young. Luis Guillorme served as translator for the interview.

On his power surge in the second half of the season

On whether that was a change suggested by the Mets organization

"I've always been a fastball hitter. At the beginning of the year I lost that approach a little bit and needed to get back to it. I like hitting fastballs, that's my pitch. I've been working on getting back to that and not chasing pitches out of the zone."

On changing organizations and being part of a high-profile trade

"It was a little strange, just because it's starting over again. You don't know anyone and you see new faces everywhere, and the approach that one team has is different from the other. It wasn't that tough, but it's an adjustment."