On the night when the Mets announced David Wright would miss the rest of the season with shoulder inflammation, Jacob deGrom provided a glimmer of hope for the future with eight stellar innings.

Jacob deGrom has been a revelation this season, putting up numbers that give him serious claims on this year's National League Rookie of the Year. It's unfortunate that he would burnish those credentials even further on a night when it was announced his team's captain would miss the rest of the season with shoulder inflammation. It would have been even more unfortunate if the Mets had lost this game after deGrom's effort, but they nearly did. How could that possibly have (almost) happened? The short answer is, Collins gonna Collins. 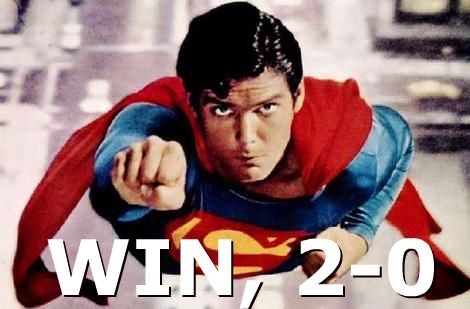 In the early going, this game resembled a million pointless September contests you've seen before, in which neither team appeared all that jazzed to be on the field. Lethargy notwithstanding, deGrom did an excellent job of holding the Rockies (a team that, unlike the Mets, can hit a longball or two) off the board. After deGrom retired the Rockies in order in the first, he allowed a ground-rule double and infield single with two out in the second before striking out DJ LeMahieu to quell the threat. Following a 1-2-3 third, he rendered harmless a one-out double by Nolan Arenado in the fourth by striking out Corey Dickerson and inducing a pop up from Wilin Roasario. The fifth brought another perfect frame.

We have come to expect such excellence from the young Mr. deGrom. We have also come to expect futility from the young Mets batters, which is exactly what they delivered in the initial innings against Colorado starter Christian Bergman. In the bottom of the first Eric Campbell reached base on a two out error and was stranded. Curtis Granderson bunted for a single in the second, taking advantage of the shift, but he too stayed anchored to first. A two-out infield single by Daniel Murphy (fresh off the DL) in the third also went uncashed, while the Mets went down in order in the fourth.

The Mets couldn't solve Bergman until the bottom of the fifth, and then just barely. In that inning, Matt den Dekker lashed a one-out double over Dickerson's head in left, then moved to third on a deGrom grounder, Juan Lagares finally converted a baserunner with a two-out line drive single to score the game's first run. Another two-out rally materialized in the sixth when Travis d'Arnaud singled past short, followed by a long Granderson double to right-center that allowed the catcher to score all the way from first.

The home team then returned to form by doing little against Colorado relievers Yohan Flande in the seventh and Rex Brothers in the eighth. With two runs to work with, deGrom retired the Rockies in order yet again in the sixth, seventh, and eighth innings, retiring the last 14 batters he faced. It was difficult to tell if this was due more to deGrom dominance or Colorado capitulation (the Rockies saw all of five pitches in the sixth), but it will look impressive in the box score, and therefore to ROY voters, all the same.

deGrom's eighth inning seemed to indicate he had more than enough left in the tank to go the distance, but Terry Collins chose to bring in Jenrry Mejia for the save because it was the ninth inning and that's when closers close, silly. The last time we saw Mejia, he was doing his best to throw away the finale in Cincinnati. Tonight he looked even worse, starting things off by surrendering a leadoff single to Charlie Blackmon. After Michael Cuddyer went down swinging, Mejia gave up a dribbler up the middle to Justin Morneau, putting the tying runs on base. He permitted those runs to get into scoring position with a wild pitch, then loaded the bases with a walk to Arenado.

At that point, even Collins was forced to recognize Mejia was toast and swapped him for Josh Edgin, who struck out the lefty batter Dickerson. Jeurys Familia was then summoned to face Rosario, and he induced a grounder to short to end the threat. Based on deGrom's eight innings of excellence, I don't think a blown lead in the ninth would have hurt his ROY chances any (which is pretty much the only thing the Mets have to play for now), but it would've stung anyway. It's nice to care about something this late in the season, isn't it?

I also want to point out, for the historical record, that the first inning saw Keith Hernandez allude to torturing banana slugs as a kid. It's been a long season for everyone. 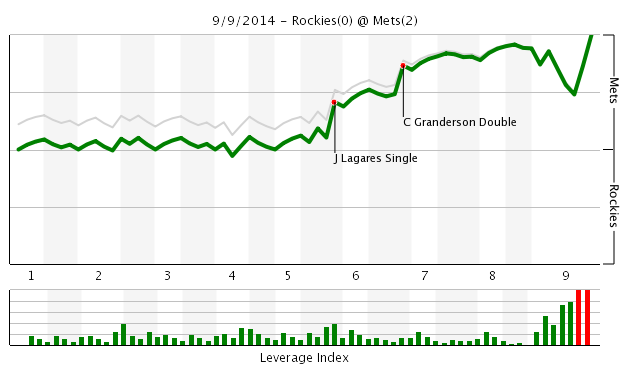