The Mets should retire Mike Piazza's #31. Why haven't they?

In light of Mike Piazza's place in team history, the Mets should formally retire his number. What are possible reasons they haven't done so?

Share All sharing options for: The Mets should retire Mike Piazza's #31. Why haven't they?

Given his raw production and the demands of his defensive position, former Mets catcher Mike Piazza is simply one of the best offensive players in the history of Major League Baseball. And after a close call in the recent vote for the Baseball Hall of Fame, he appears to be on the precipice of the game's highest honor. Yet another honor eludes him, as the Mets still have not formally retired Piazza's #31.

The Mets, rather famously, have retired the number of only one player, Tom Seaver. By comparison, the Houston Astros, who also debuted in 1962 and have never won the World Series, have retired eight players' numbers. While retiring a number is a team's ultimate honor and there is something to be said for maintaining a high standard, Piazza's case clears any bar. It seemed that the organization understood this when, at the end of the 2008 season, Shea Stadium closed with Seaver and Piazza, quite literally, walking into the sunset. Yet somehow the Mets have not gotten this right. Given the contradiction, I thought it useful to look at possible explanations, both on-field and off-, as to why 31 goes unworn, but unhonored, at Citi Field.

On the field, it can be argued that Piazza's production just does not meet the team's standard. After all, while Piazza spent more time with the Mets, he had most of his best seasons with the Dodgers. His fWAR ranks just 10th in franchise history and he never won a championship. Indeed, there were players on the '86 club with comparable or even superior production who have gone unhonored.

It's true that Piazza did not have the caliber of Seaver's Mets career and that Piazza's cumulative Mets WAR is less than stellar. But Seaver's is an impossible standard; furthermore, Piazza's offensive Mets WAR ranks third all-time (the rough equivalent to his mark in LA), and was achieved in far fewer at-bats than the players ahead of him had. Also, Piazza's first five seasons with the Mets stack up well against any in franchise history, evidenced by his .309/.382/.581 batting line and 149 OPS+. That's remarkable production at any position, let alone for a catcher. And although the '86 Mets were the best club in team history, the cases for its best players are mixed thanks to the ultimately bittersweet careers of Doc and Darryl, and the short windows and steep declines of Keith Hernandez and Gary Carter. The story of that era of Mets baseball is of a supremely talented team built brick-by-brick that captured the imaginations of New York and the sports world. The story of the late-nineties and early-two-thousands Mets is unequivocally headlined by Mike Piazza. 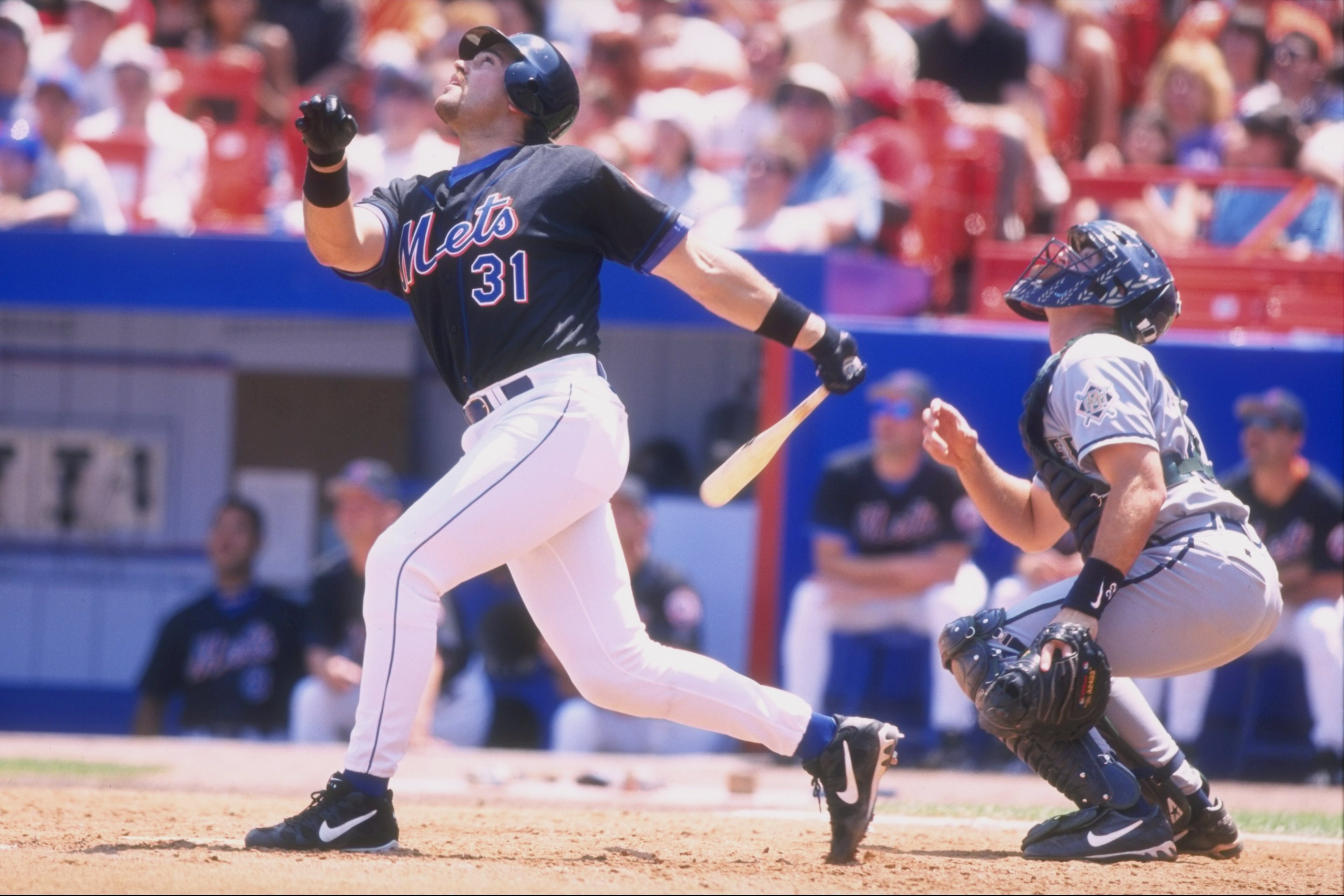 Whatever the on-field merits, it's fair to say that number retirement has always been about more than accomplishments between the chalk. And, on the surface, the off-field factors should be a boon to Piazza's candidacy. Could there be an x factor that explains why the Mets have withheld the honor?

It's possible that the team has let debunked speculation and innuendo regarding performance-enhancing drugs scare it away from honoring its former catcher in such a public and permanent way. The Mets could be waiting for Piazza to get the blessing of the BBWAA in the Hall of Fame vote before deeming him sufficiently suspicion-free. Or, maybe the Mets have resisted because the Piazza trade and re-signing were always understood as the call of then-majority owner Nelson Doubleday, which Piazza acknowledged in his speech at Citi Field in 2013. Making him a Mets hall of famer is one thing, but to highlight Piazza as Seaver's heir despite current ownership's opposition to his acquisition may be too much for the Wilpons to stomach. Or, perhaps ownership chose not to retire #31 at his Mets Hall of Fame induction ceremony simply to guarantee themselves an additional big day at the gate.

Speculation aside, it's clear that Piazza meant as much to the Mets off the field as he did on it. In the spring of 1998, the Mets had had six losing seasons in seven years, and had not made the playoffs in nine, all while the Yankees were in the midst of a dynasty. On April 13, two 500-pound beams fell at Yankee Stadium, forcing the team to play at Shea two days later. Nearly 41,000 watched the Yankees beat the Anaheim Angels, thanks in part to a Darryl Strawberry home run. Later that night, 16,000 showed up to watch the Mets play the Cubs. The Mets were at rock bottom, facing total irrelevance. It was that contrast that prompted Doubleday to authorize the Piazza move, which was consummated on May 22. After the team's win that day and before Piazza's arrival, the Shea Stadium scoreboard had a two-word message of hope to the exiting Mets faithful: "He's coming."

For the next eight seasons, Piazza was the focal point of the organization. He was a marketable star, a team player, and a hell of a hitter.

There are reasons for the Mets not to retire #31, but why focus on those rather than staking a claim to the greatest offensive catcher in MLB history? It may seem trivial, but fans—myself included—want the name Mike Piazza to be associated with the Mets. We want his number on the wall and we want a Mets cap on his plaque in Cooperstown. Ownership should want that, too. He has the numbers, he has the accomplishments, and he had the significance to the franchise. Retire the number. He, and we, deserve it.