Gil Hodges and his unending quest for baseball immortality

The passage of time, a lack of proper baseball perspective, and a flawed system continue to keep Gil Hodges out of Cooperstown.

Share All sharing options for: Gil Hodges and his unending quest for baseball immortality

To one generation of fans, he was the silent, hulking first baseman for the Boys of Summer. For another generation, he's the ex-Marine who took over a team used to being the laughingstock of baseball and turned them into World Champions. A third generation knows him as a combination of both, a feared slugger for one of history's most talented teams and the revered skipper who oversaw a miracle. Regardless of generation, the omission of Gil Hodges from the Hall of Fame continues to be a black eye for the prestigious Cooperstown institution. It's a wrong that seems more and more likely to never be corrected.

By the time he appeared on the Baseball Writers' Association of America (BBWAA) Hall of Fame ballot for the first time in 1969, Hodges was basking in the glow of a remarkable World Series victory. The native of Princeton, Indiana had done what many thought impossible by guiding the Mets—a moribund franchise known only for losing—to the World Series title against the heavily favored Baltimore Orioles. Only 24.1 percent of BBWAA members voted to send Hodges to Cooperstown in 1969, a refrain that would become all too familiar.

For 15 years, Hodges took his place on the BBWAA Hall of Fame ballot and for 15 years, Hodges was denied. His last year of eligibility came in 1983 and, though support for Hodges jumped to 63.4 percent, it was still far below the 75 percent needed for induction. Hodges dropped off the BBWAA Hall of Fame ballot with the most votes ever (3,010) for a player never admitted to Cooperstown.

His luck did not change in the hands of the Veterans Committee and the ensuing variations of it that now exist. Like the BBWAA ballot, a player needed at least 75-percent support of the committee for enshrinement; but unlike its counterpart, a player's entire career as a player, manager, or executive could be taken into account. Despite this, Hodges was denied every year the committee met—except once. That one time came in 1993, when Hodges did receive the requisite 12 of 16 votes for induction. However, the committee's chairman at the time, Hall of Famer Ted Williams, disallowed the vote of Roy Campanella, Hodges's former teammate in Brooklyn, because he was not physically present at the meeting. Campanella passed away several months later, and never again would Hodges get that close to entering baseball nirvana.

Hodges's 2014 fate was determined by the Golden Era Committee, which announced on December 8 that no one was elected. Hodges received no more than three votes, just the latest slap in the face to a man who personified grace on the field and off—not to mention someone who was certainly worthy of enshrinement based on his playing career alone.

Hodges began his big league career with a one-game cameo in 1943 at 19 years old, but military duty wiped out his next two years entirely. Hodges returned to baseball in 1946 when he played exclusively in the minor leagues, before becoming a major leaguer for good in 1947. In 18 seasons with the Dodgers and Mets, Hodges hit .273/.359/.487 with an .846 OPS, 370 home runs, and 1,274 RBI. His home run total was the eleventh highest ever at the time of his retirement. All ten players ahead of him and the seven directly behind him on that list had been or would be inducted into Cooperstown.

Hodges was also a two-time World Series champion as a player (1955 and 1959), a three-time Gold Glove recipient, an eight-time All-Star, and one of the most feared sluggers of those legendary Brooklyn teams. He put his name on the map in 1949 at age 25 when he hit 23 homers and drove in 115 runs. That was the first of seven consecutive seasons Hodges would surpass 20 home runs and 100 RBI, making him the only first baseman in National League history to accomplish that feat until Albert Pujols matched his mark in 2010. From 1948 to 1959, Hodges led all major league first basemen in home runs, RBI, total bases, extra-base hits, and OPS.

Together with teammates Jackie Robinson, Duke Snider, Pee Wee Reese, and Roy Campanella—Hall of Famers all—Hodges helped lead the Dodgers to seven National League pennants in his career, including the Brooklyn franchise's only World Championship in 1955. His finest year came in 1954 when the slugger hit .304/.373/.579, notching career highs in batting average, slugging percentage, home runs (42), and RBI (130). His World Series numbers (.267/.349/.412 and five home runs in 39 games) pale in comparison to his regular season figures, but much of that was skewed by an awful performance in the 1952 Fall Classic, when Hodges went hitless in 26 plate appearances. 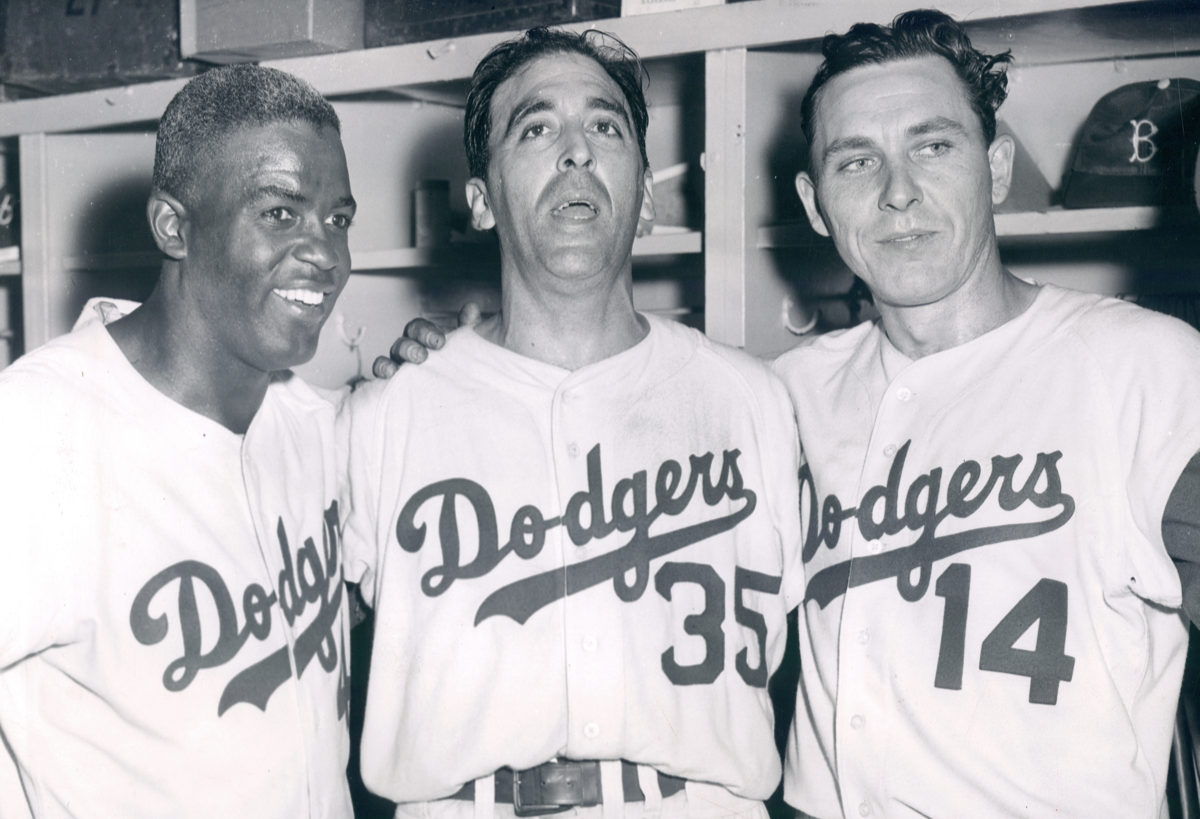 Although he put up respectable numbers during his first two years after the Dodgers moved to California (.267/.348/.471 with 47 homers), it was clear that Hodges was on the downside of his career. He returned to New York for his final two big league seasons, appearing in 65 games for the Mets in 1962 and 1963. His managerial career also began in 1963 with the Washington Senators, where he remained as skipper through the 1967 season before returning to New York to guide the Mets to an eventual date with destiny.

Perhaps if Hodges had lived longer, his chances of induction would have been far greater. A heart attack took his life just two days before his 48th birthday. Unfortunately, his death also seemed to take away any clear remembrance of a player that instilled fear in opposing pitchers for close to a decade. The passage of time has certainly brought a sense of romance to 1950s baseball in New York, and the Dodgers, for all their failings against the crosstown Yankees, have garnered most of that attention. Although never as popular as the more outspoken Robinson, Snider, or Reese, Hodges has been remembered fondly alongside his more famous teammates of the era. And despite the imposing figure he struck at the plate, Hodges was a quiet man who let his play do the talking. A former member of the United States Marine Corps who received a Bronze Star for his work in the Pacific during World War II, Hodges was well respected as a player and, later, as a manager.

While Hodges certainly remains an icon to many in the baseball community—particularly in New York—a career that ended 52 years ago continues to fade into the mist. He will never be confused with fellow greats of the time like Willie Mays or Stan Musial, players who can certainly be considered "immortals." However, Hodges's consistency and his important role in those feared Dodgers' lineups was diminished by the offensive explosion of the 1990s and early 2000s. No longer are first basemen with 370 career home runs thought of as Hall of Famers, particularly as time has dropped Hodges from 11th to 75th on the all-time home run list.

Gil Hodges hasn't hit a home run since 1962 or driven in a run since 1963. He hasn't managed a game since the end of the 1971 season and unfortunately he has not taken a breath since April 2, 1972. Sadly, the most recent voting, when he hardly received any support, may be the final nail in Hodges's Hall of Fame chances. If his former peers—who actually remember Hodges as more than just an image in old, grainy video clips or mentions in books—won't vote him in, what chance is there that future iterations of the panel will do so? As the panel of players, executives, and writers evolves with more modern members, the prism of Hodges's career will continue to dim. To future generations, Hodges is just another in a long line of major league players whose numbers continue to shrink in the annals of history as time creeps forward.

Perhaps it's fitting in some perverse way that Hodges is kept out of the Hall of Fame. "Wait 'til next year" was always the mantra surrounding Hodges and his Brooklyn teammates. Perhaps his exclusion from Cooperstown allows that well-known phrase to live on. Perhaps it lets Hodges stay at the forefront of the baseball world's consciousness each time he's up for induction. Or, perhaps it's just not meant to be, which is truly an injustice to a man who deserves it.

"Wait 'til next year" may not hold the nostalgic and special meaning it once did for a legion of heartbroken Brooklynites, but for one beloved New York sports icon, it provides multiple generations of fans a reason to keep saying it.