A look back a seven underrated Mets who manned the keystone position.

In the third installment of our 10-part series, we give you seven Mets second basemen who enjoyed great but underappreciated years in New York. To see the first two entries of the series, follow the links below:

If there are any overlooked second basemen that you believe we ourselves overlooked, feel free to let us know in the comment section. And please remember to vote in the poll at the bottom of the page!

Ron Hunt finished second in Rookie of the Year voting in 1963 and had an even better sophomore campaign. In 1964, the second baseman hit .303/.357/.406 with a 117 wRC+ and three fWAR, and had, by WAR, the best season of any Mets position player in the organization's first six years of existence. That year, Hunt became the first player in franchise history to start an All-Star game, and did so in front of his home crowd at the newly built Shea Stadium.

After leaving the Mets, Hunt developed into an on-base machine with a famous knack for getting hit by pitches. The second baseman led the league in that category for seven consecutive years with the Giants and Expos, and was hit an almost-comical 50 times in 1971—a record that stands as the largest single-season total in the modern era.

After an early-season trade from the Orioles to the Mets in 1967, Bob Johnson enjoyed a career year in New York. In 246 plate appearances, Johnson hit an outstanding .348/.377/.474 with a 145 wRC+—primarily as a pinch hitter and utility infielder—and led the National League with 12 pinch hits in 31 at-bats.

Felix Millan had an impressive debut season in New York following a trade by the Braves to the Mets. In 1973, the light-hitting second baseman hit a solid .290/.332/.353 with a 95 wRC+, but his main contributions came with the glove. According to Baseball Reference, Millan contributed 1.2 WAR on defense alone, based on his career-high 410 putouts, as well as 411 assists, 99 double plays turned, seven total zone runs saved, and just nine errors committed in 1,377.1 innings on the field.

Millan’s three total fWAR were the most of his career, and the second most among position players on the National League champion Mets. For the first and only time in his 12-year career, Millan received MVP votes for the value that he provided to that team. 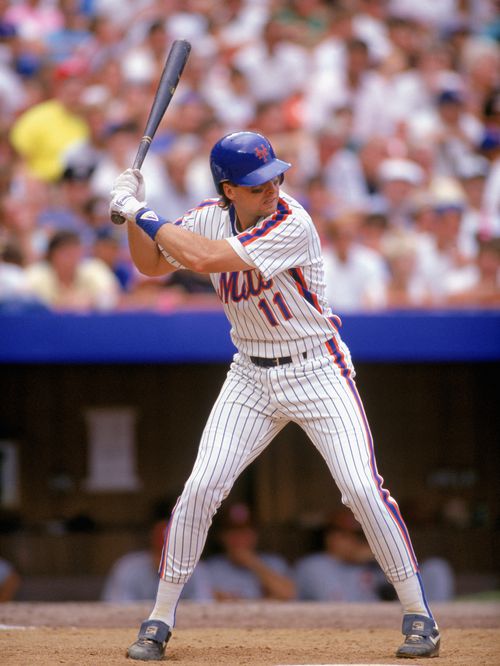 Another second baseman not known for his offensive prowess, Tim Teufel had a stunning year with the bat in 1987, hitting .308/.398/.545 with a 154 wRC+, and tying career highs with 14 home runs and 61 RBI. Despite playing in fewer than 100 games as part of a platoon with Wally Backman, Teufel contributed 3.1 fWAR. While his offensive numbers came back down to earth in subsequent years, Teufel’s 1987 season was clearly one of the best of any second baseman in franchise history. It would be interesting to see what he could have done that year with regular playing time. Instead, Backman started 76 games at second, hitting just .250/.307/.287 with a 67 wRC+ in 335 plate appearances.

When the Mets traded Jeff Kent to the Indians in 1996, no one could have predicted that Kent would become an MVP and one of the greatest offensive second basemen in the history of the game. But there were still signs that Kent could be something special. Kent’s .279/.327/.453 batting line and 107 wRC+ in his five years with the Mets easily made him a top-10 offensive second baseman in the game. In each of those five years—his first five in the league, bookended by half-year stints in Toronto and Cleveland—Kent was an above-league-average hitter with more than 20 doubles, while reaching the 20-home-run plateau twice. Moreover, his 78 homers during that time were the second most among all major league second basemen.

Interestingly, the second baseman with the most home runs was Carlos Baerga, whom the Mets received for Kent in that infamous trade with the Indians. So perhaps the trade was more defensible at the time than it is in retrospect? Not exactly. Baerga’s production had declined in each of the previous five years, with respective wRC+ of 125, 122, 114, 107, and then just 74 before the trade in 1996. Baerga would have two-plus unproductive seasons in New York, just as Kent’s borderline Hall of Fame career began to take off.

Desi Relaford’s signature moment as a Met was probably his brilliant one-inning relief outing in a 2001 blowout loss to the Padres, in which Relaford threw 90 mph fastballs, retired the side in order, and struck out a batter. Unfortunately, Relaford’s brief stint as a reliever has overshadowed what was an otherwise great year for the utility infielder. In 2001, Relaford saw time at second, third, and short, and hit a career-best .302/.364/.472 with a 120 wRC+, eight home runs, 36 RBI, 27 doubles, 13 stolen bases, and two fWAR in 340 plate appearances.

The Mets signed Jose Valentin before the 2006 season to be a backup infielder, coming off of arguably his worst year in the big leagues. After the team traded Kaz Matsui to the Rockies in June, Valentin capably took over the reins at second base as the Mets made their first playoff run in six years. While Valentin’s role on the ’06 Mets isn’t completely overlooked, it’s easy to forget just how good he was and what made him so valuable. Sure, Valentin swung a good bat, as his .271/.330/.490 batting line, 106 wRC+, and 45 extra-base hits were well above average for a second baseman. But what’s often forgotten is Valentin’s defense: that year, Valentin’s 15 defensive runs saved and 11.1 UZR translated into an impressive 1.8 defensive bWAR. All told, his 2.9 total fWAR made Valentin a top-five second baseman in Major League Baseball.