They might not be household names, but these third basemen had some very productive years in New York.

In the fourth installment of our 10-part series, we put the spotlight on four Mets third basemen who embody what this series is all about. Each is a player that younger generations of fans might not be familiar with, but who had at least one great year in a Mets uniform. To read the first three installments of the series, follow the links below:

As always, if you think we missed anyone, please let us know in the comment section, and remember to vote in the poll at the bottom of the page!

Ed Charles’s career got off to a promising start. Charles produced at least 2.7 fWAR in four of his first five seasons with the Kansas City Athletics, on the strength of his above-average offense and a strong glove. After struggling in early 1967, the A’s traded him to New York, where his struggles continued for the remainder of the season. But Charles bounced back in 1968, the "year of the pitcher," with a career-best 130 wRC+ on a .276/.328/.434 batting line and 3.6 fWAR. Charles was relegated to a part-time role in 1969 after another drop in production, but took home a World Series ring in what was his final year in the major leagues. 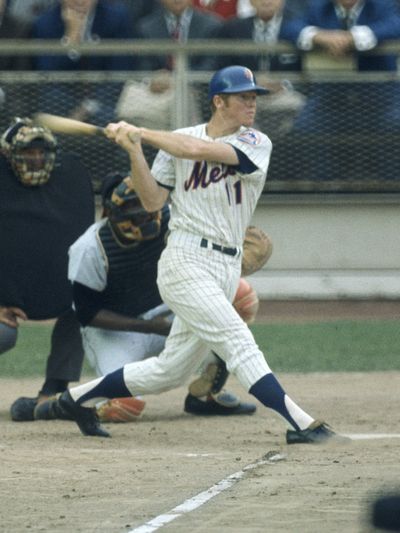 Wayne Garrett was a mainstay of the Mets’ infield during a winning period of franchise history in which the team won two National League pennants. Garrett was actually the best position player by WAR on the 1973 National League championship team. That year, Garrett hit a solid .256/.348/.403 with a 114 wRC+, 16 home runs, 58 RBI, and 76 runs scored. But it was his defense that propelled him to the first and only four-WAR season of his career, on the strength of seven total zone runs saved, 102 putouts, 313 assists, 46 double plays turned, and an impressive 1.2 defensive bWAR.

The circumstances under which Lenny Randle became a Met were a bit unusual, to say the least. After losing his job as the Rangers’ starting second baseman to a rookie during the 1977 exhibition season, Randle brutally attacked manager Frank Lucchesi, leaving him seriously injured and in need of surgery. The Rangers quickly dumped Randle on the Mets for a player to be named later. In a strange twist of fate, Randle then had a career year as the Mets' third baseman, hitting .304/.383/.404 with a 121 wRC+, 78 runs scored, 33 stolen bases, and four fWAR. He never had and would never have another season even approaching this level of production; but the 64-win 1977 Mets were certainly the beneficiaries of this one-hit wonder.