Share All sharing options for: Pedro Martinez: The Mets years

On Tuesday afternoon, former Mets starting pitcher Pedro Martinez was elected to the Baseball Hall of Fame with 91.1% of the vote. Not even Murray Chass-level curmudgeonry from the BBWAA could keep out Martinez, who called Flushing home from 2005 through 2008.

In his remarkable career, Martinez amassed 218 wins and 3,154 strikeouts, good for thirteenth all-time. He ranks second all-time with an adjusted 154 ERA+, third with a 4.15 strikeout-to-walk ratio and 10.04 strikeout-per-nine ratio, and fifth with a 1.054 WHIP. Jay Jaffe’s JAWS System ranks Martinez as the twenty-first best starting pitcher in baseball history.

Martinez signed a four-year, $53 million deal in December 2004, the same offseason Carlos Beltran signed for seven years and $119 million. At the time Martinez joined the Mets, he was coming off a World Series championship and a 13-season run with the Dodgers, Expos, and Red Sox that ranks among the best for any starting pitcher in baseball history.

From 1992-2004, Martinez won 182 games, captured three Cy Young Awards, finished top four in the voting four other times, topped the league in strikeouts and strikeout-to-walk ratio in three seasons, led the league in ERA and ERA+ on five occasions, and led the league in WHIP five times. He was not just great, he was transcendent at the peak of baseball’s offensive explosion.

The right-hander’s 0.7373 WHIP in 2000 is the best single-season mark in baseball history. Martinez joined fellow Hall-of-Famer Greg Maddux (0.811 WHIP in 1995) as the only pitchers with a top-10 single-season WHIP to come after 1913. Martinez compiled the all-time best mark in a year in which hitters posted a .782 OPS, the third-highest total in history, and teams scored runs (5.14 per game) at the highest rate since 1936.

In 2005, Martinez's brilliant skills were on full display at Shea.

Martinez joined the Mets in 2005 before his age-33 season. Unfortunately, as most remember, Martinez’s time with the Mets saw him fall victim to injuries and the cruel passage of time, as he was limited to just 79 starts in four seasons. His overall numbers during those years—3.88 ERA, 109 ERA+, 1.159 WHIP, 8.6 K/9—were certainly above league average. However, those years saw Martinez post the only below-league-average ERA+ seasons of his career (98 ERA+ in 2006 and 75+ in 2008).

In 2005, though, Martinez's brilliant, now Hall-of-Fame certified skills were on full display at Shea.

Martinez’s 2005 season was overlooked at the time and is still underappreciated today. He was still near the pinnacle of his powers, which was evident from his second start. After recording a no-decision in a Mets Opening Day loss at Cincinnati, Martinez faced off against John Smoltz, another 2015 Hall-of-Fame inductee. The day belonged to Martinez. He needed only 101 pitches to hurl a complete game two-hitter. The Mets won 6-1, their first victory of the season, with Martinez striking out nine Braves and walking only one. Through the first half Martinez went 10-3 with a 0.845 WHIP, 9.6 K/9, and held hitters to a batting line of .185/.228/.291.

For the season, he started 31 games, tossing 217.0 innings and finishing 15-8. His 0.949 WHIP and 4.43 strikeout-to-walk ratio both led the National League. His 208 strikeouts and four complete games each tied him for third best. His 2.82 ERA was fourth best in the league. His 6.9 bWAR was third among pitchers, behind only Roger Clemens and Dontrelle Willis.

Curiously, though, Martinez did not receive a single Cy Young Award vote. The Cardinals' Chris Carpenter won the award, with a lower bWAR, higher WHIP, and a slightly better ERA+ to Martinez (150 to 146). Nationals closer Chad Cordero, with a 2.0 bWAR and just 74.1 innings pitched, finished with more votes than Martinez.

2005 would be Martinez’s best in Queens. Despite being ignored by the national media (reverse East Coast bias?), Martinez put together one of the best seasons ever for a Mets starter. His bWAR, WHIP, and K/9 all rank among the top-eight single-season totals in team history. 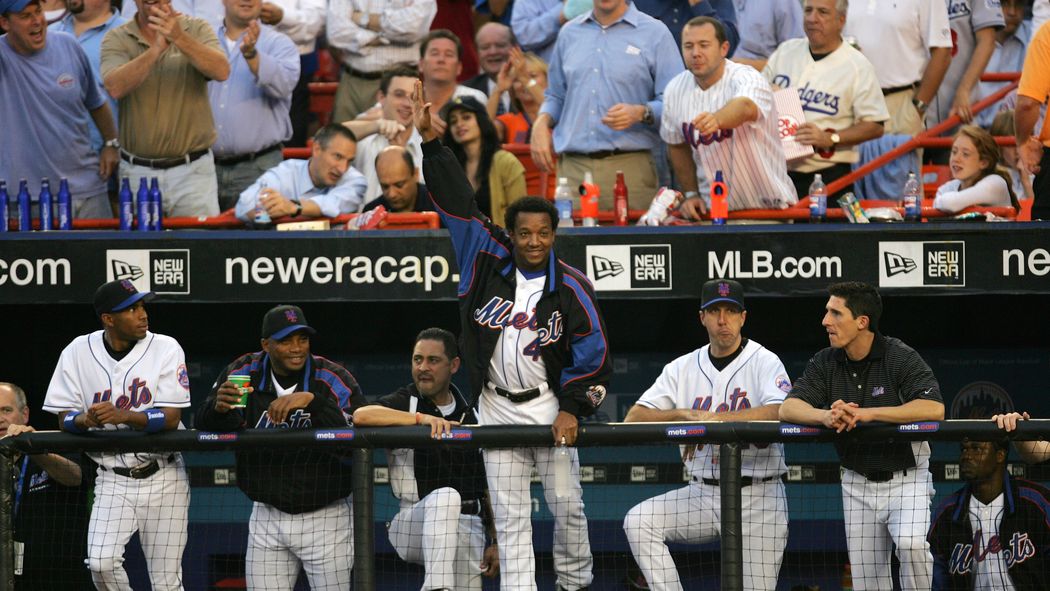 Martinez’s 2006 began at his stellar 2005 level, as he compiled a 3.45 ERA and 1.003 WHIP through the first half. He was looking every bit the ace of a team with a 12-game division lead when the Mets traveled to Fenway for a three-game series in late June. During the series' first game, Martinez received a nearly five-minute standing ovation from the Boston crowd. That would prove to be the highlight of his homecoming. Martinez took the ball the next night, facing just 19 batters and surrendering eight runs on seven hits and two walks in three innings. He recorded only one strikeout, as the Mets fell to the Red Sox, 10-2.

Martinez’s 2006 season would only get worse. In the second half he made just seven starts, averaging fewer than five innings per start and posting a 1.454 WHIP, while hitters raked him for a .857 OPS. An injured shoulder and left leg kept him off the NLDS and NLCS rosters that year.

Shoulder surgery limited Martinez to five starts in 2007, none before August. He still managed to compile a 169 ERA+ and 10.3 K/9, while recording his 3,000th career strikeout.

Today, Martinez is a deserving first ballot Hall-of-Famer. He might not be wearing a Mets hat on his plaque, but he left his mark among the Amazin’ faithful, even if it was for far too brief a time.