The Mets got a spectacular start from deGrom, and their captain drove in the runs that eventually won the game.

Jacob deGrom is fantastic. Coming into the year, it was at least reasonable to wonder if he could live up to his great rookie season. But as he surpassed that level of production, the hypothetical question was whether or not you’d prefer to have deGrom or Matt Harvey start Game 1 in the playoffs. And once Harvey’s innings limit came up in September, the fact that deGrom was going to pitch the Mets’ first playoff game in nine years took a lot of that sting away. 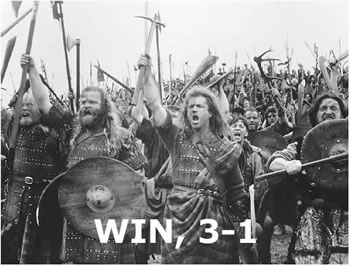 There are going to be a lot of playoff firsts for the Mets for however long this ride lasts, but deGrom’s postseason debut was nothing short of spectacular. In seven scoreless innings, deGrom struck out thirteen—13!—Dodgers, walked just one, and gave up only five hits. He threw 121 pitches, 79 of them strikes, and generated 24 swinging strikes in the process. That’s a rate of 19.8 percent, which is very, very good. And his four-seam fastball averaged 96.69 miles per hour, according to Brooks Baseball, the second-hardest he has thrown in a start this year. And he worked around a pair of brutal plays in left field by Michael Cuddyer, both of which were officially doubles, even though they should have been outs.

Opposite deGrom, Clayton Kershaw wasn’t a slouch, either, but the Mets got to him while the Dodgers could not get to deGrom. Kershaw struck out eleven Mets, but he walked four and gave up three runs in six-and-two-thirds innings.

The Mets made Kershaw work hard in the first inning, especially David Wright, who worked a full count and fouled off a bunch of pitches before ultimately drawing a walk. The Mets didn’t score in that inning, but they helped set the table for the runs they scored later.

In the fourth inning, Daniel Murphy hit a no-doubt home run to right field to break the scoreless tie, a blue collar blast if there ever were one. In the seventh, Lucas Duda walked, and after a Cuddyer ground out, Ruben Tejada walked, too. deGrom bunted both runners over before Curtis Granderson drew a walk to load the bases. Clayton Kershaw was tired, and Don Mattingly went to the bullpen, calling upon Pedro Baez.

So up came David Wright, the Mets’ captain who missed so much of this season because of spinal stenosis and by all accounts appreciates the hell out of the fact that the Mets are playing playoff baseball and he’s on the field for it. A player whose clutch performance has been questioned by some Mets fans over the years, Wright smoked a single into center field, driving in two runs that would ultimately decide the game.

Tyler Clippard pitched the eighth and gave up a one-out double to Howie Kendrick and a two-out single to Adrian Gonzalez that scored Kendrick. That prompted Terry Collins to bring in Jeurys Familia for a four-out save, and Familia retired all four of the batters he faced.

The first game of the playoffs couldn’t get much better than that. 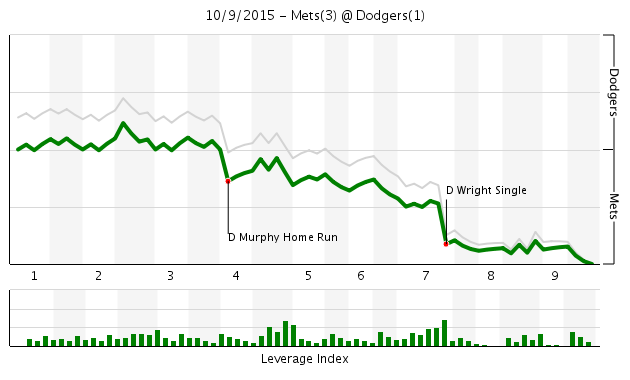