Matt Harvey was excellent and the Mets' bats did enough to get past the Cubs in Game 1.

The Mets kicked off the NLCS on a high note, topping the Cubs 4-2. Matt Harvey bounced back from his shaky start against the Dodgers and tossed 7.2 strong innings for the win. Daniel Murphy homered again, while Travis d'Arnaud chipped in with his own solo shot and Curtis Granderson added two RBIs of his own. Jeurys Familia once again worked more then three outs to secure the win and a 1-0 advantage for the Mets. 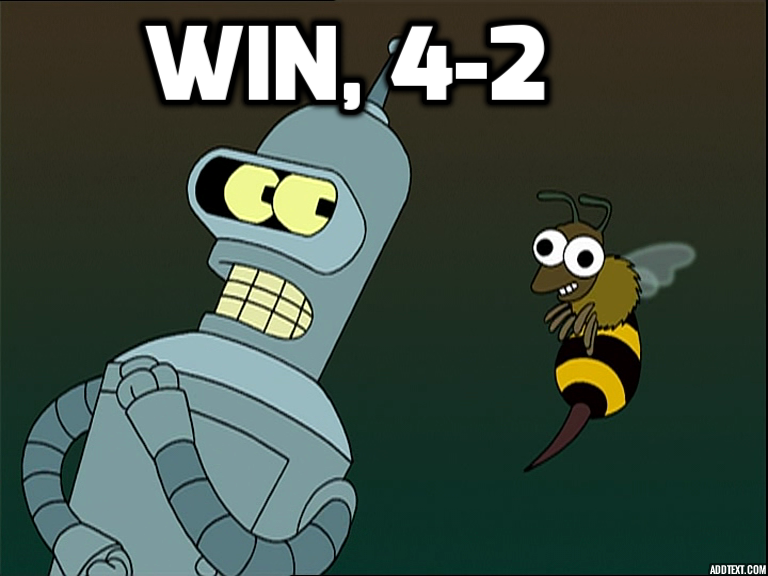 The Mets were off to a fast start in this one. Harvey made Dexter Fowler and Kyle Schwarber look silly in the first inning and induced a ground out from Kris Bryant. Then, in the bottom half of the first, Daniel Murphy added to his growing postseason résumé with his fourth home run in six postseason games (a feat he's never accomplished in the regular season). After hitting only one home run off a lefty in the regular season, Murphy has now hit two home runs off of Clayton Kershaw and a third off of Jon Lester. His other home run came against Zack Greinke, of course. That qualifying offer keeps looking more and more likely.

Harvey continued his dominance, throwing a perfect game through the fourth inning, but Jon Lester was nearly his equal, keeping the Mets' lead at one. In the fifth, Harvey hit Anthony Rizzo with an 0-2 pitch, then immediately served up a double to Starlin Castro (with some help from a poor play by Juan Lagares) to let the Cubs tie the game at one. Two batters later, Javier Baez singled on a ground ball to left. Castro made the mistake of running on Yoenis Cespedes, who fired a 94.3 MPH strike to the plate to keep the game tied. Harvey then struck out Jon Lester to escape the threat.

Undeterred by losing the lead, the Mets came right back in the bottom half of the frame. Wilmer Flores and Juan Lagares hit one-out singles after a Michael Cuddyer strikeout. Harvey then attempted to bunt, but a great aggressive play from Rizzo got Flores at third. No matter—Curtis Granderson lined a single into center field to score Lagares and give the lead right back to the Mets.

Leading off the top of the sixth, Dexter Fowler lined a ball that drilled Matt Harvey in the triceps. He recovered to find the ball and throw out Fowler at first before waving off Ray Ramirez and Terry Collins (he probably just wanted to avoid a shoulder boot). Though the shot looked painful, Harvey seemed unphased as he retired Kyle Schwarber and Kris Bryant to end the inning. In the bottom of the sixth, Murphy and Cespedes popped out, bringing Travis d'Arnaud to the plate with two outs and nobody on. d'Arnaud hit an absolute bomb of a home run to center field, hitting the apple and stretching the Mets' lead to 3-1. d'Arnaud is now one of only three Mets catchers (Gary Carter, Mike Piazza) to have multiple home runs in a postseason.

Harvey saw more trouble in the seventh, walking Anthony Rizzo to lead off the inning and giving up a hard line drive to Starlin Castro that was hit directly at Murphy. Jorge Soler then hit a slow ground ball that Harvey misdirected, preventing a double play and putting runners on first and second with one out. Again, Harvey was unphased, as he struck out Javier Baez and Tommy La Stella (pinch hitting for David Ross) to end the threat.

In the bottom of the seventh, the Mets managed to manufacture another insurance run. Lagares led of with a single and was bunted to second by Harvey. Lagares then took advantage of Jon Lester's infamous inability to control the running game and took third base easily. Granderson promptly hit a fly ball to left field, and Lagares was able to slide in ahead of Miguel Montero's tag at the plate to stretch the Mets' lead to three runs.

To the surprise of many, Harvey came back out for the eighth and recorded the first two outs without any issue. Kyle Schwarber then hit an absoutely mammoth shot to right field, estimated at 459 feet, to pull the Cubs back within two. Terry Collins wasted no time and brough Jeurys Familia in for the four-out save. Agonizingly, Familia walked Kris Bryant to bring up Anthony Rizzo as the tying run, but got a weak ground out to shortstop to end the eighth. In the ninth, Familia quickly recorded two outs before allowing a single to Miguel Montero. Tommy La Stella then hit a sharp ground ball that Murphy made a diving short-hop pick on to end the game on a fantastic play. Though he certainly had some help from his defense tonight, Familia has been nothing short of dominant this postseason, retiring 20 of 22 batters to face him and allowing no runs.

Teams that have won the first game of a seven-game series have gone on to win the series 63.4% of the time. The series is far from over, but the Mets are in an excellent position, particularly with likely pitching matchup advantages in Games 3 and 4. Tomorrow, Noah Syndergaard, who made his major league debut against the Cubs back in May (5.1 IP, 3 R, 6 K, 4 BB), faces off against Jake Arrieta, who faltered last time out against the Cardinals and has far exceeded his previous single-season innings totals. For a preview of what the Cubs can expect tomorrow, check out this Pedro Martinez analysis.