A quick look at how Harvey pitched in the Mets' victory.

Share All sharing options for: How Matt Harvey dominated the Cubs in Game 1 of the NLCS

Matt Harvey's second career postseason start was a big improvement upon the first. It's not that the first was terrible, but he had looked fairly pedestrian against the Dodgers in the NLDS. In the NLCS opener against the Cubs last night, however, he looked fantastic.

Harvey took a perfect game into the fifth inning before giving up a run in that frame and gave up just two runs in seven-and-two-thirds innings with nine strikeouts and two walks. He generated 17 swinging strikes on his 97 pitches, an excellent rate of 17.5 percent.

Harvey's four-seam fastball averaged 95.2 miles per hour in Game 1, according to Brooks Baseball. That's plenty fast but actually one of Harvey's slower fastballs this year. 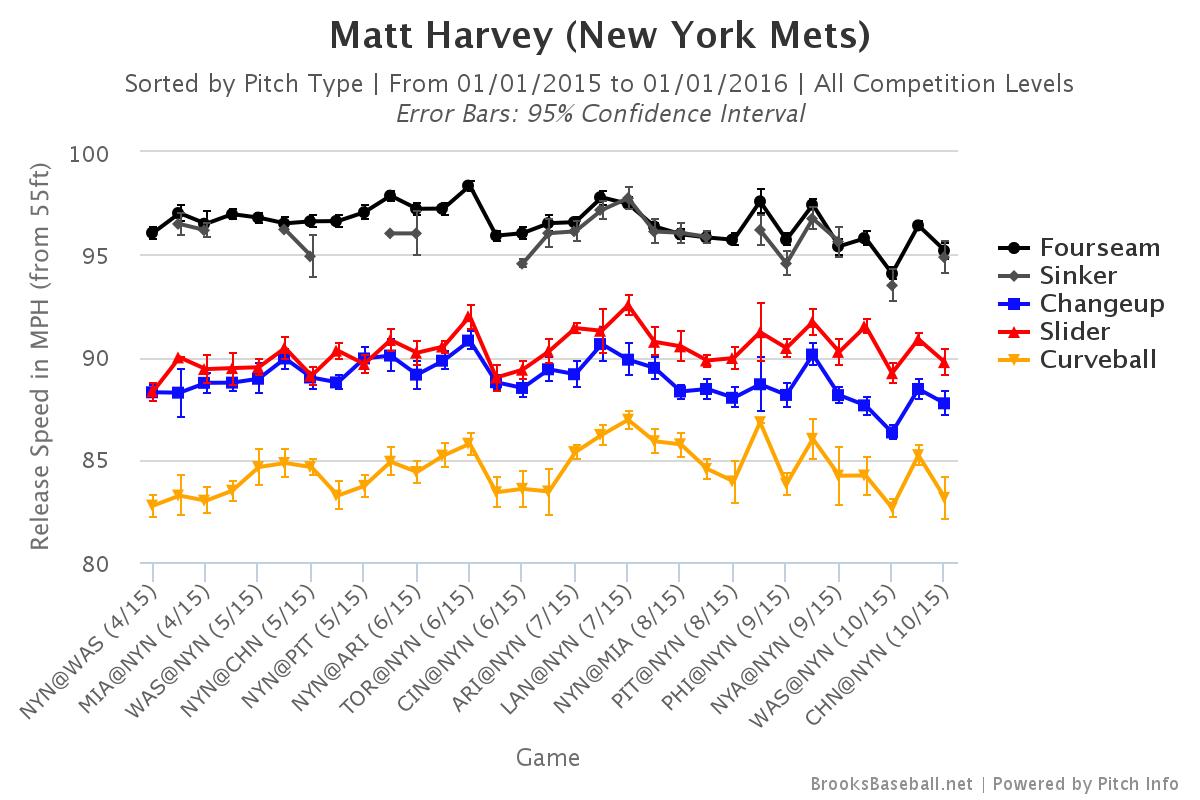 Harvey threw the four-seam fastball just 48 percent of the time in the game. He relied on his offspeed pitches, using the curve 17 percent of the time, the slider 16 percent, and the changeup 12.5 percent. That mix worked really well for Harvey, as all four of those pitches got swings-and-misses. He got six on the fastball, four on the curve, and three each on the slider and changeup.

Kyle Schwarber got to Harvey with a very long solo home run in the eighth inning, but in the first inning, he was one of Harvey's strikeout victims and a great example of Harvey's mix of pitches. Harvey fell behind on a curve low and inside, but he turned the count in his favor with a changeup for a strike at the knees and a fastball for a strike at the knees. And then he came back with the curve on the outer half, and Schwarber was helpless.

That's also a good illustration of how Harvey pitched lefties last night. He used his curve and changeup heavily against left-handed hitters, but he only threw one slider to them. He threw three curves and two changeups to righties, but he threw the slider against them 18 times.

That's pretty standard across baseball, of course—sliders to same-handed hitters, changeups to opposite-handed hitters. But when Matt Harvey has all of his pitches working, he is one hell of a pitcher.