The Mets are facing a lesser-known starting pitcher in Game 3 than they did in the first two games of the series.

Having won an NLDS series in which they faced Clayton Kershaw and Zack Greinke twice and won games against Jon Lester and Jake Arrieta to begin the NLCS, the Mets are set to face Kyle Hendricks in Game 3 tonight agains the Chicago Cubs. The 25-year-old righty definitely isn't on the level of those four pitchers, but he's not awful by any means.

Hendricks was drafted by the Texas Rangers in the eighth round of the 2011 amateur draft. He was traded to the Cubs along with another minor league player during the 2012 season for Ryan Dempster, who had a 2.25 ERA at the time of the deal but had a 5.09 ERA the rest of the way that year with Texas. But Hendricks spent the rest of that year and all of the 2013 season in the minors, too, before starting the season there in 2014.

Seventeen starts later, Hendricks earned his promotion to the big leagues. He made thirteen starts for the Cubs and had a 2.46 ERA and 3.32 FIP in them. In his first full season in the bigs this year, though, he hasn't been quite as good as that, with a 3.95 ERA and 3.36 FIP. Hendricks' 22.6 percent strikeout rate ranked 27th among 78 qualified starting pitchers in baseball this year, and his 5.8 percent walk rate ranks 26th. He gave up 0.85 home runs per nine innings, which is better than the league average of 1.06 for starting pitchers this season.

But the home run rate has been a major issue for Hendricks this year against left-handed hitting, against which he has given up 1.49 home runs per nine. And the Mets aren't lacking left-handed hitting with Curtis Granderson, Daniel Murphy, Lucas Duda, and Michael Conforto presumably in the lineup tonight.

Hendricks has used five pitches this year, according to Brooks Baseball. The pitches and their average velocities: 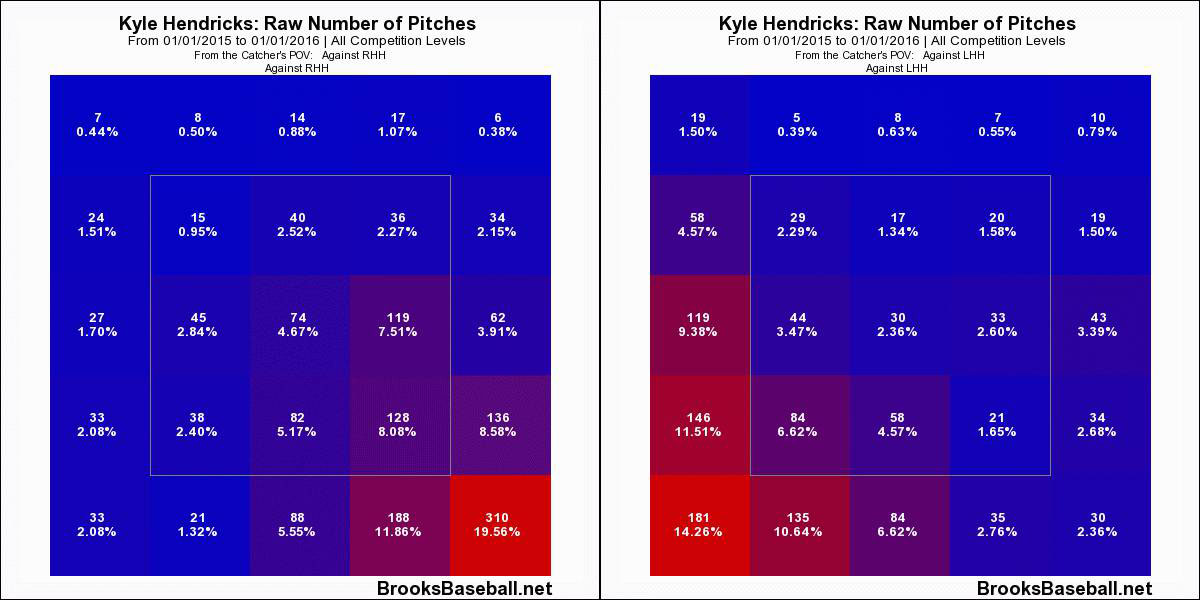 When he doesn't keep the ball low and away, the results aren't good—especially against lefties. 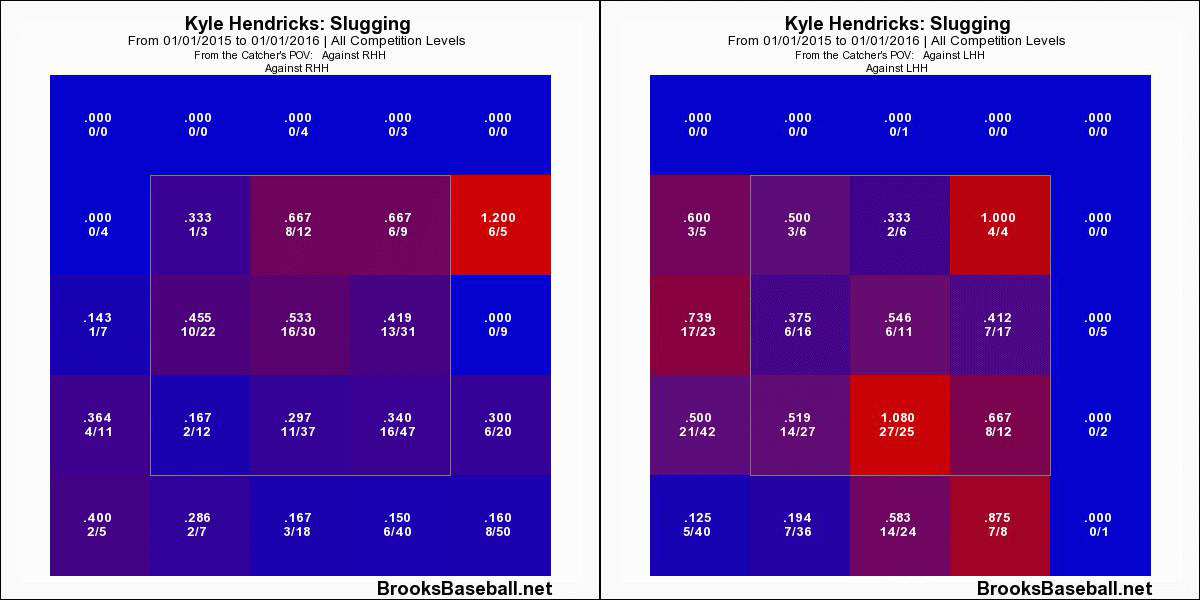 Hendricks gave up three home runs to the Cardinals in his lone start in the NLDS, two of them to lefties. The Cubs won that game anyway, as they scored plenty of runs and their bullpen shut the Cardinals out the rest of the way.

The first home run was hit by the left-handed Matt Carpenter. Hendricks left the ball up, and Carpenter crushed it.

Hendricks left this pitch to Kolten Wong in a hittable spot, too.

And the third home run came off the bat of the right-handed Randal Grichuk. That's a hanging curveball if there ever were one.

Unsurprisingly, the Mets' left-handed hitting quartet has bee able to take advantage of the types of pitches that have cost Hendricks. 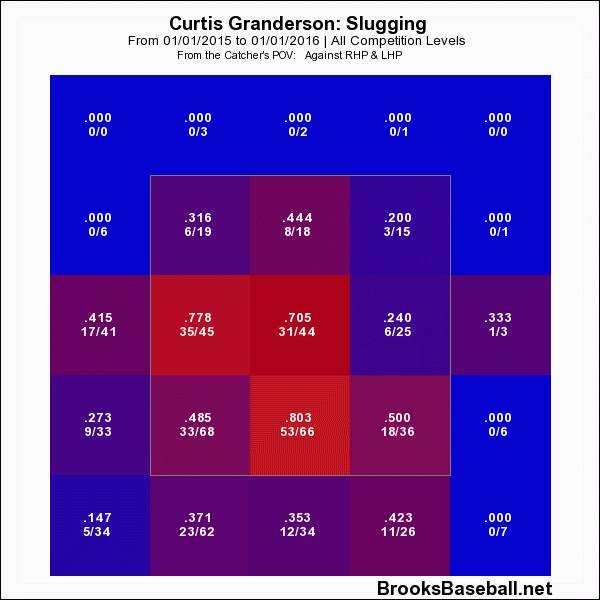 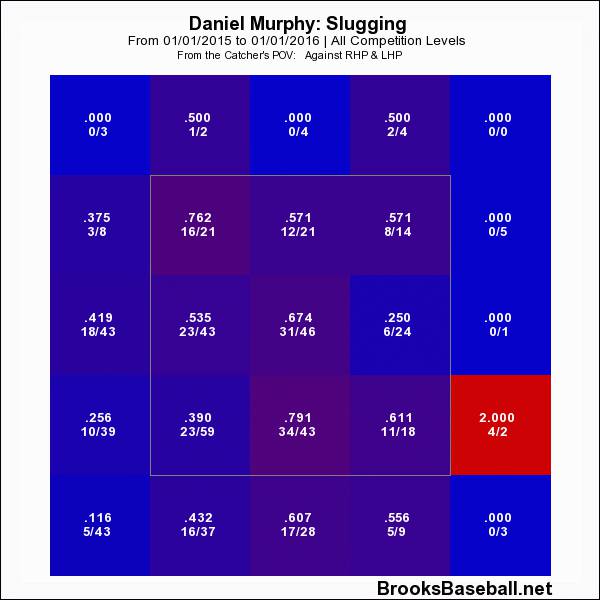 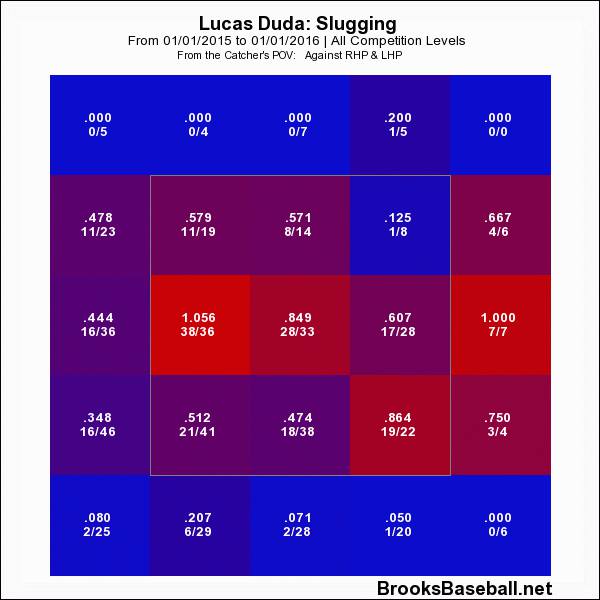 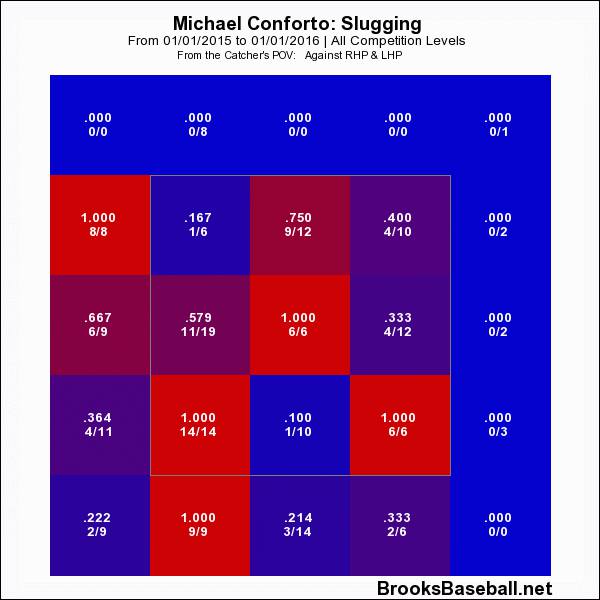 Conforto is perhaps the most interesting hitter of the bunch. He's fared well against hittable pitches like all four of the left-handed hitters here, but he's hit for power against some of the pitches that have been Hendricks' bread and butter against lefties.

Anything is possible in one game, of course. But if the Mets' left-handed hitters can exploit Hendricks' weakness, the Mets would have a pretty good chance at winning Game 3.