Jacob deGrom gave up two runs in seven innings, and the Mets had no problem scoring enough runs to win the game.

For the third time in as many games, the Mets beat the Cubs in the NLCS. They are just one win away from making the World Series. The Mets never trailed in Game 3, and they have not trailed the Cubs yet in the best-of-seven series. 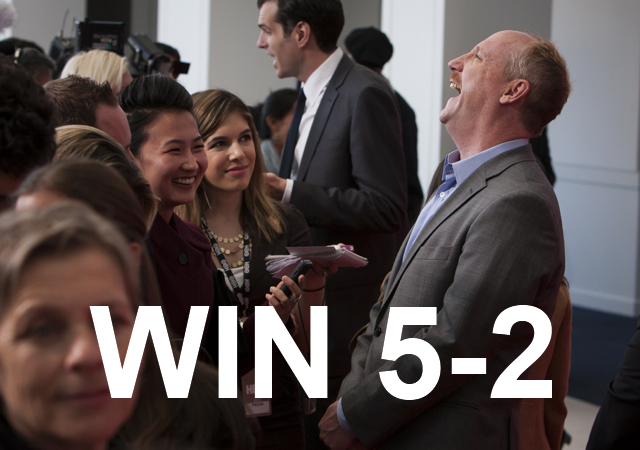 It helped that the Mets didn’t waste any time getting on the board. With one out and nobody on in the first—after Curtis Granderson was caught stealing—David Wright singled. One Daniel Murphy out later, Yoenis Cespedes ripped a double into the left-center field gap to bring Wright home.

Jacob deGrom gave up a solo home run to Kyle Schwarber in the bottom of the inning, but he got out of that frame without allowing anything else despite allowing a few baserunners and throwing a bunch of pitches.

Neither team scored again through the second inning, but Daniel Murphy hit a solo home run—his sixth of the playoffs and the fifth-straight game in which he hit one—to put the Mets back on top in the third. There’s really no explaining Murphy’s incredible postseason run, one that has thus far put him on a Babe Ruth/Carlos Beltran level of postseason play. Forget Murphy’s contract status for the rest of the season and enjoy what he’s doing on the field instead.

In the bottom of the fourth, the Cubs again tied the game with a solo home run against deGrom—this time off the bat of Jorge Soler. But the Cubs didn’t score again in the game, and the Mets did.

With Trevor Cahill—the Cubs’ second relief pitcher after pinch hitting for Kyle Hendricks in the bottom of the fourth—on the mound, the Mets took the lead in rather unique fashion in the sixth. Cespedes singled to start the inning, and Lucas Duda attempted to beat a Cubs shift with a bunt. He didn’t succeed in getting a single out of it, but he at least bunted well enough that Cespedes got to second without so much as a throw.

Cespedes followed that up by stealing third base, and Cubs catcher Miguel Montero’s throw to get him out there didn’t stand a chance. Cespedes didn’t score on Travis d’Arnaud’s ground out to third, but he did score when Michael Conforto struck out on a pitch that got far away from Montero. The Mets had the lead again, and they didn’t give it up again in the game.

They would have added more runs in that inning, too, if not for the ivy on the outfield wall at Wrigley Field. Shortstop Wilmer Flores hit a ball to right field, and Soler made a diving attempt to catch it in front of him but missed badly. The ball rolled well beyond him, but it made it to and got stuck in the ivy. The umpires stuck with the ground rules of the park and kept the Mets’ runners at second and third, a correct adherence to a ridiculous rule.

The Mets added a couple of insurance runs in the seventh, when Cespedes singled home Wright—who had busted out a double in the inning—to put the Mets up 4-2. Lucas Duda grounded out to first on the next play, but Cubs first baseman took the out at first before throwing hme, and his throw couldn’t catch Daniel Murph as he scored the Mets’ fifth, and ultimately final, run of the night.

Neither team scored again in the game. deGrom finished seven innings with seven strikeouts, two walks, and just two runs allowed. He hasn’t even been at his best, but he’s still had a great postseason. And Terry Collins turned the game over from deGrom to Tyler Clippard, who worked around a Dexter Fowler double for a scoreless eighth, and Jeurys Familia for the ninth. And Familia got a couple of ground outs before striking out the final batter of the game and securing the Mets’ win.

It’s hard to believe that this is real life. The Mets came into the season as potential Wild Card competitors, but six months later, they’re a win away from the World Series. It’s not a total shock, but it certainly is a pleasant surprise. 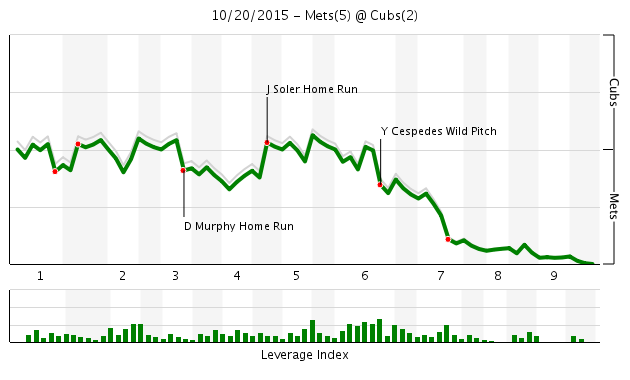