Let's take a look at the starting pitcher who will face the Mets tonight—for however long Joe Maddon lets him pitch.

Despite trailing 3-0 in the National League Championship Series, the Chicago Cubs are sticking to their plan and starting Jason Hammel against the Mets tonight in Game 4. Their alternatives would have been Jon Lester, pitching on three days of rest, or perhaps Jake Arrieta, pitching on two days of rest. The 33-year-old righty might not be in the game for long—by design—as the Cubs have had a quick hook for him and like using long relievers, which they also did in Game 3 last night.

Of course, getting Hammel out of the game early isn't just about using the other pitchers. After his eighteenth appearance of the season on July 21, Hammel had a 2.82 ERA. Over his final thirteen appearances in the regular season, he had a 5.37 ERA and averaged under five innings per start. His first and second half splits don't like up perfectly with that cutoff, but they're pretty close.

His strikeout rate dipped a bit, which is better illustrated by K% here than K/9, and his walk rate went up a tick, too. But the big problem in the second half was that Hammel allowed a ton of home runs. For context, the average major league starting pitcher gave up 1.06 home runs per nine this season. 1.61 home runs per nine is a very bad rate.

Drilling down into his usage splits a bit, Hammel really only uses all five of his pitches against left-handed hitters. He favors the sinker against them, which makes sense since it moves away from them. Against righties, he favors the slider and four-seam fastball and very rarely throws the curve or change.

Against lefties, Hammel has basically sliced the strike zone in half diagonally and thrown his pitches on the low/away side of that line. 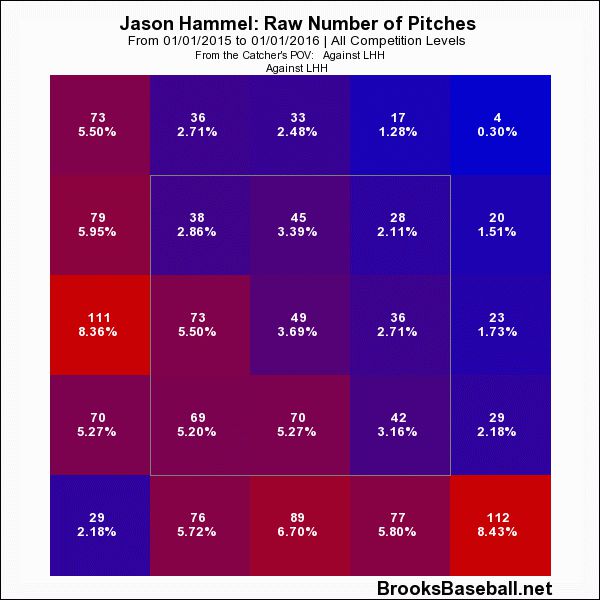 He has been hurt on pitches that end up in some of those zones, though. Here's a slugging percentage against map versus lefties. 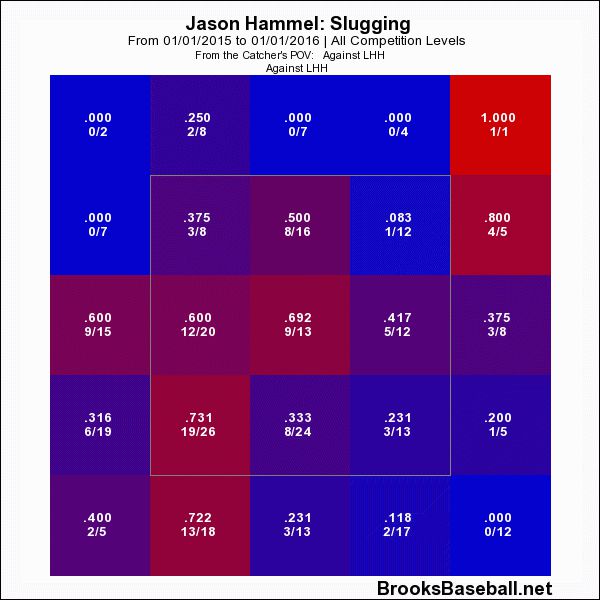 Against right-handed hitters, Hammel's pitch locations look much like Kyle Hendricks' map yesterday: tons of pitches outside the zone, low and away. Considering he throws his slider a staggering 46 percent of the time against righties, that makes sense. 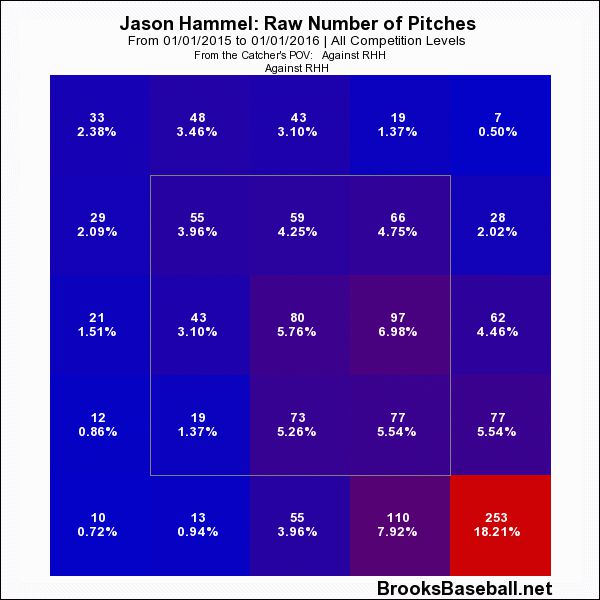 When he's pitching out there, he's usually doing okay. But when he isn't, that's where the power problem arises. 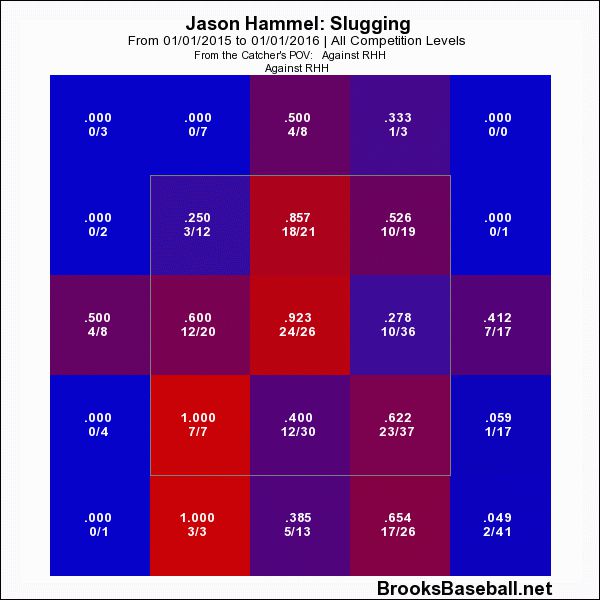 In total, he gets his swings-and-misses mostly with the changeup and slider, which have whiff rates of about 16 and 18 percent this year, respectively.

Hammel might not be in the game for long, but he is unquestionably the weakest of the four pitchers the Mets have faced in the NLCS. If they can take advantage of that for however many innings he's in the game, it could set the tone for the rest of the game as they attempt to complete a sweep.