The Mets beat the Cubs in resounding fashion to complete a four-game sweep of the NLCS.

The New York Mets are going to the World Series. Having won the first three games of the National League Championship Series, the Mets went into Game 4 last night in Chicago with an opportunity to sweep the Cubs, and they didn’t waste any time doing so. They took an early lead, built upon it, added some insurance, and got mostly good pitching to beat the Cubs 8-3. 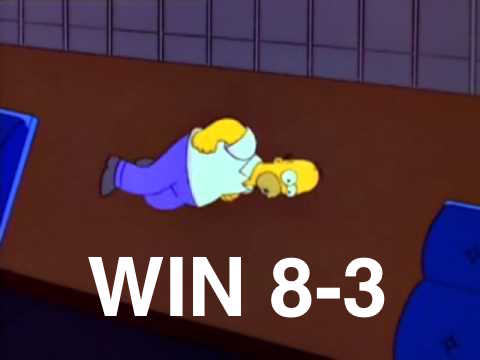 After Curtis Granderson singled to begin the game, Cubs starter Jason Hammel retired David Wright and Daniel Murphy. But Yoenis Cespedes—who would later leave mid-game with what the Mets announced as left shoulder soreness—drew a walk. Lucas Duda took Hammel deep to center field for a three-run home run. Before anyone was done celebrating that incredible start to the game, Travis d’Arnaud followed up with a solo home run. The Mets had a 3-0 lead in the series and 4-0 lead in the game.

In his second start of the playoffs, lefty rookie Steven Matz cruised through the first inning and didn’t get into much trouble until the fourth. But before the game got there, the Mets added a couple of runs in the top of the second.

The Cubs had indicated they would go to the bullpen very early if necessary, and after Hammel issued a one-out walk to David Wright in the second, they did. In came Travis Wood, who gave up a single to Murphy to put runners on first and second. Wood got Cespedes to strike out looking, but Lucas Duda came through again, this time with a double that easily scored both runners.

That’s about the time that it clicked that the Mets were going to the World Series. The Mets didn’t score again for a bit, but it didn’t much matter.

Matz got into that aforementioned jam in the fourth. The Cubs loaded the bases against him with a Jorge Soler double, a walk by Kris Bryant, and a single from Anthony Rizzo. Starlin Castro smoked a ball that seemed destined for left field, but David Wright snagged it for the first out. Matz got Kyle Schwarber—whose defense in left field continued to be a major problem for the Cubs in this game—to ground out, which scored a run but was well worth it in exchange for the out, and he got Javier Baez to hit a pop fly a bit down the left field line, near the on-field bullpen at Wrigley, that Wilmer Flores caught to end the inning.

The hook on Matz wasn’t nearly as quick as it had been for Hammel, but in the bottom of the fifth, Terry Collins pulled him in favor of Bartolo Colon following a pair of two-out singles with Kris Bryant due up. Collins also used a double switch that put Kirk Nieuwenhuis in the game in left field—next to Juan Lagares, who had come in for Cespedes. The double switch looked at least a little questionable at the time, but Colon struck Bryant out in his biggest moment yet with the Mets.

The Mets continued to put men on base but couldn’t convert them into runs for a few innings. Colon pitched a scoreless inning after that strikeout to end the previous one. Addison Reed took over in the seventh and retired all three batters he faced.

And then Daniel Murphy did it again. In the eighth inning, with David Wright on first via another walk, Murphy hit yet another home run. It was his seventh home run of the postseason and his sixth-straight game with a home run. Those are both ridiculous things to say, but they sure do sound fantastic. Murphy finished the NLCS with a 1.850 OPS. He has a 1.462 OPS in the playoffs in total. With a reputation for being a streaky hitter, he has never been hotter.

Tyler Clippard took over in the bottom of the eighth and quickly gave up a double to Soler and a two-run home run to Bryant. That was about the least stressful two-run home run a Mets relief pitcher has ever given up in the playoffs. Clippard retired the next three batters he faced, and Jeurys Familia came in to pitch the ninth.

Familia got the first two batters he faced to ground out to second. He walked Miguel Montero. And he struck Dexter Fowler out looking to end the game. The Mets were officially National League champions and on their way to the World Series.

Several Mets players have been outstanding in the playoffs. A team isn’t likely to sweep the NLCS without that being the case. But Familia has been dominant in these playoffs, pitching in every one of the Mets’ seven wins—and one loss in the NLDS—with six strikeouts and two walks in 9.2 innings of work. Opponents have a .186 OPS against him.

It might feel strange, but this state of Mets euphoria is very real. The New York Mets are in the World Series. Love the Mets. 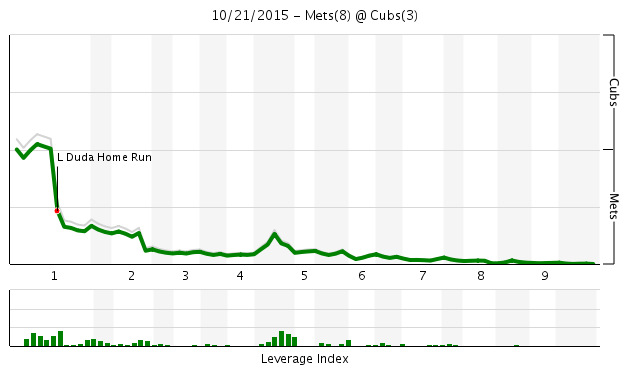