The Royals' Game 1 starter isn't Matt Harvey, but his past two seasons have gone decently.

The Kansas City Royals will start Edinson Volquez against the New York Mets in Game 1 of the World Series tonight. He was neither great nor terrible for the Royals in the regular season, finishing it with a 3.55 ERA and 3.82 FIP. And in three starts in the playoffs, he has a 4.32 ERA and 4.45 FIP. None of that is particularly impressive.

Believe it or not, the Royals are Volquez's sixth major league team. The 32-year-old righty signed with the Texas Rangers as an international free agent back in 2001 and made his big league debut with the team in 2005. He didn't stick there, though, and made just a few major league appearances that season and the next two. After the 2007 season, the Rangers traded him and Daniel Ray Herrera—the relief pitcher who threw eight innings for the 2011 Mets—to the Cincinnati Reds for Josh Hamilton. He spent four seasons with the team but only came close to pitching a full season's workload in the first one. After the 2011 season, the Reds sent Volquez, Brad Boxberger, Yasmani Grandal, and Yonder Alonso to the Padres for Mat Latos.

The results had never been particularly good for Volquez along the way, but he put together a decent year in San Diego in 2012. The next year, he had a 6.01 ERA through 27 starts, and the Padres released him. The Dodgers picked him up, and he made a few starts down the stretch. He hit free agency after that season, signed a one-year deal with the Pirates, had a very good season for them in 2014, and hit free agency again. The Royals signed him to a two-year, $20 million in the offseason.

In total, Volquez has a 4.29 ERA and 4.24 FIP for his career. Accounting for league averages and park factors, he's been a below-average major league pitcher, but he was better than that last year and this year.

Per Brooks Baseball, Volquez has a four-pitch arsenal, listed here with average velocities this year:

In terms of velocity, Volquez has been about as consistent as a pitcher can be over the length of his career. He's seen a velocity spike in the playoffs, but as Eno Sarris points out at Fangraphs, that's not uncommon. 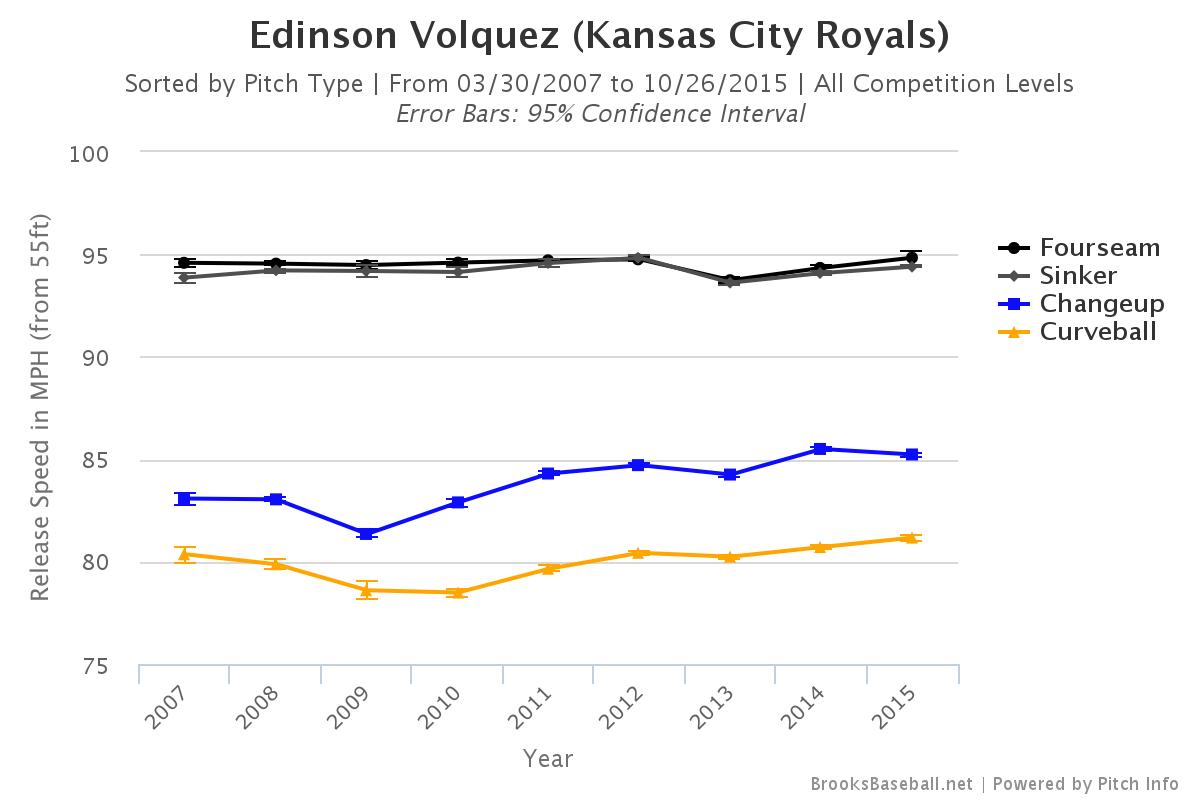 The offspeed stuff has gotten harder over the years, as Volquez has changed as a pitcher. Earlier in his career, he had decent strikeout rates but extremely high walk rates. Both rates dropped in 2013, and they've been a bit lower over the past two seasons.

Around the time that those rates dropped, Volquez swapped his four-seam and two-seam fastballs. He had thrown the former as his primary pitch, but he significantly cut his use of it between 2011 and 2013 and ramped up his use of the two-seam fastball. 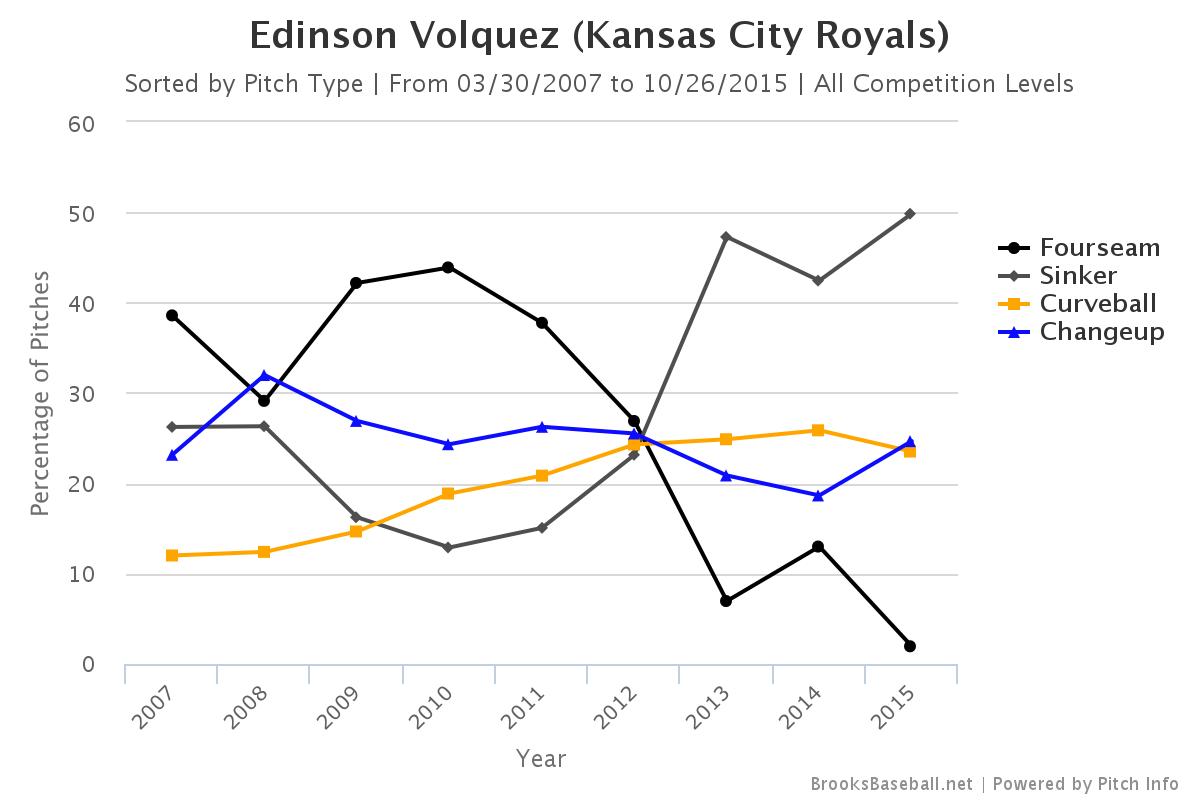 It hasn't always been the case over his career, but this year, Volquez has fared better against right-handed hitters than left-handed hitters. That was the case, however, in his very good season with the Pirates in 2014. With Kelly Johnson slated to be the Mets' designated hitter tonight—and Lucas Duda, Daniel Murphy, Michael Conforto, and Curtis Granderson in the lineup—it seems that's something the Mets are looking to exploit.

Like many pitchers, Volquez throws a lot of pitches low and away from hitters. He uses the changeup a bit more often and the fastball a bit less often against lefties, but his overall usage isn't all that dependent on the platoon matchups.

Here's where he's thrown his pitches to lefties this year. 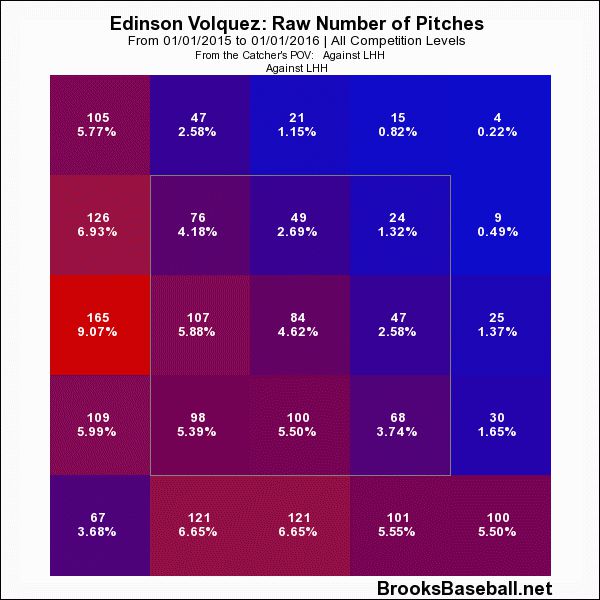 Lefties have done most of their damage against him when he's not throwing there. 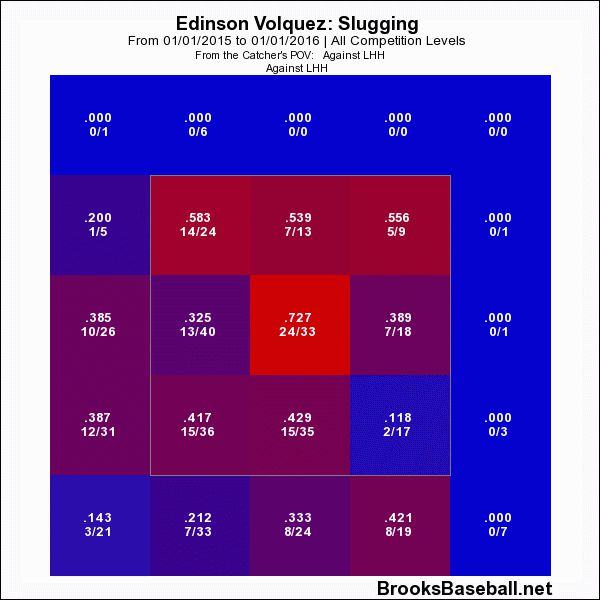 And things look pretty similar against right-handed hitters, though he goes low and outside with greater frequency against them. 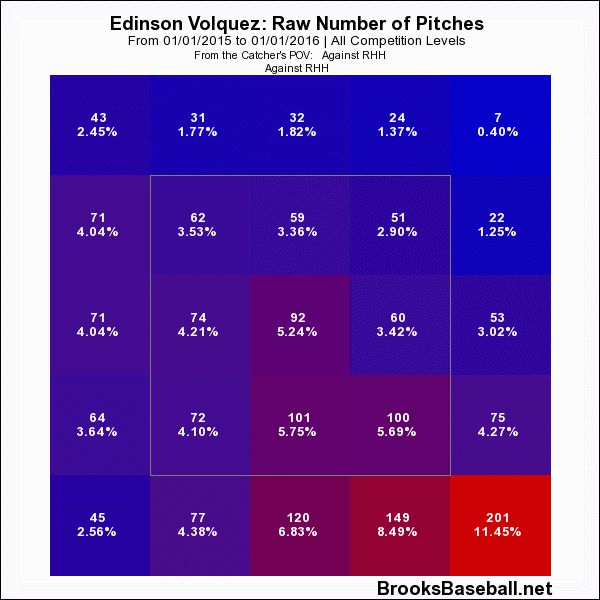 When he gets inside to righties, things really don't go well. 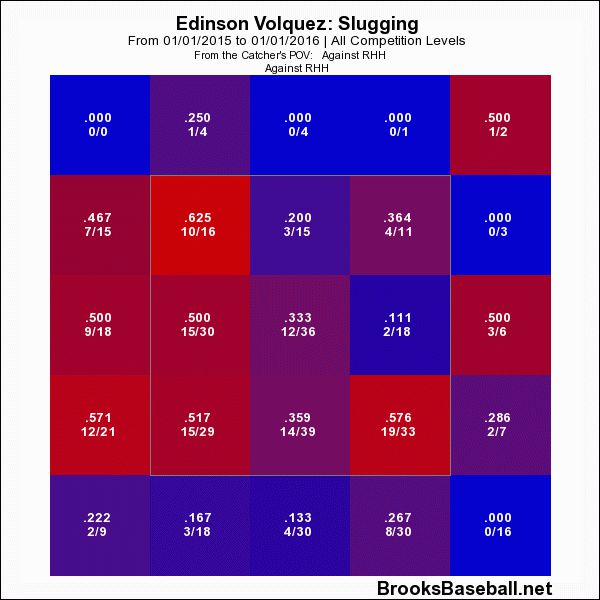 Add it all up, and Volquez isn't a slouch. But he's a pitcher the Mets should be able to do damage against, especially if his struggles against left-handed hitters the past two seasons persist.