The Mets lost a heartbreaker in the first game of the World Series.

The first game of the World Series was a bizarre and frustrating one, and the Mets lost in the fourteenth inning. The Mets and Royals traded runs over the course of the game, and after an extremely rare blown save by Jeurys Familia in the ninth inning, Kansas City went on to win on a walk-off sacrifice fly against Bartolo Colon. 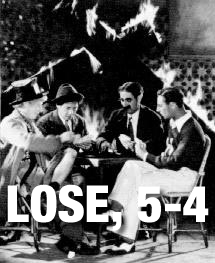 Matt Harvey was not at his best, but he gave up three runs in six innings. One of those runs scored because Yoenis Cespedes misplayed an Alcides Escobar fly ball leading off the bottom of the first into an inside-the-park home run. Harvey only struck out two, fueling the fire for anyone concerned about the Royals’ hitters handling the Mets’ pitchers.

The Mets tied the game in the fourth on a Travis d’Arnaud infield single, which was only an infield single because Mike Moustakas made a great stop to keep it in the infield. They took the lead on a Curtis Granderson solo home run in the fifth, and they tacked on a run on a Michael Conforto sacrifice fly in the sixth.

The Royals scored twice in the bottom of the sixth to tie the game, but the Mets re-took the lead in the eighth inning after Juan Lagares bunted for a singled and stole second—and came in to score on an error by Royals first baseman Eric Hosmer on a ground ball hit by Wilmer Flores.

But the most reliable member of the Mets’ bullpen, who had come in to bail out Tyler Clippard with two outs in the eighth inning to attempt a four-out save, wound up giving the lead back in the bottom of the ninth. Jeurys Familia retired the first batter but gave up a long home run to Alex Gordon, turning near-certain victory into an extra-innings affair.

The Mets’ bullpen was impressive overall. Addison Reed had thrown a scoreless seventh inning earlier, and despite getting into trouble, Clippard didn’t allow any runs, with help from Familia. Jon Niese pitched a couple of scoreless innings for the Mets, and Bartolo Colon pitched a couple, too. But Chris Young—yes, Chris Young—threw three scoreless innings of his own, and the Royals finally broke through against Colon with a sacrifice fly with the bases loaded in the bottom of the fourteenth. 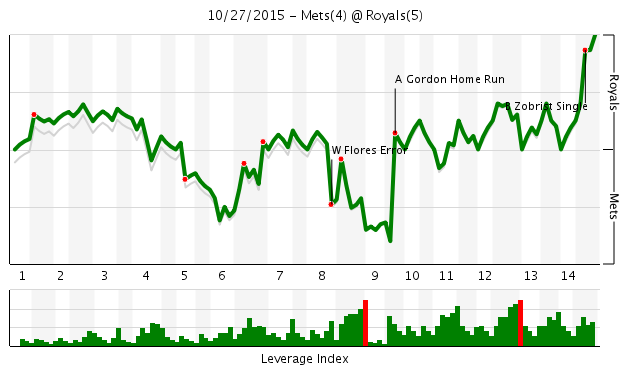