Cueto was one of the better pitchers in the game for a while but has not been good with the Royals.

Between 2011 and 2014, Johnny Cueto was very quietly one of the very best pitchers in baseball. But he has been very bad since the Royals traded for him a few months ago, with a 4.76 ERA in 13 regular season starts and a 7.88 ERA in three postseason starts with the team.

Signed by the Reds back in 2004, he made his major league debut in 2008, his age-22 season. His first two seasons were respectable but unspectacular. He improved in 2010, his third season the big leagues, and finished the year as an above-average major league pitcher. And then he went on a tear over the next four seasons. Despite a modest rate of 7.5 strikeouts per nine innings, Cueto had a 2.48 ERA over 102 starts. Among qualified starting pitchers over those four seasons, that ERA ranked second to Clayton Kershaw.

Cueto started this season looking like Cueto. Through nineteen starts with the Reds, he had a 2.62 ERA and 3.20 FIP, numbers that fit right in with what he had done over the previous four seasons. An impending free agent, he was traded by the Reds to the Royals on July 26. The results since then have not been good.

The first four starts Cueto made for the Royals went well. He had a 1.80 ERA in them, still looking like Johnny Cueto. But things took a sharp turn for the worse in his fifth start, and he never really recovered. In his final nine regular season starts, Cueto had a 6.49 ERA. His strikeout rate plummeted over that stretch, and he allowed a .382 batting average on balls in play. That's hard to do with the Royals' defense playing behind you. The first and second half splits make for a convenient point of comparison, even though he was a few starts into the second half of the season when he started struggling.

So the strikeouts are down, the walks and home runs are up a bit, and the hits are way up, as evidenced by the differences in WHIP and BABIP there.

Those velocities are pretty well in line with his career norms, but the fastballs are down slightly. Both were clocked at the lowest speeds of Cueto's career this year. And from Brooks, here are his monthly velocity splits from this season. 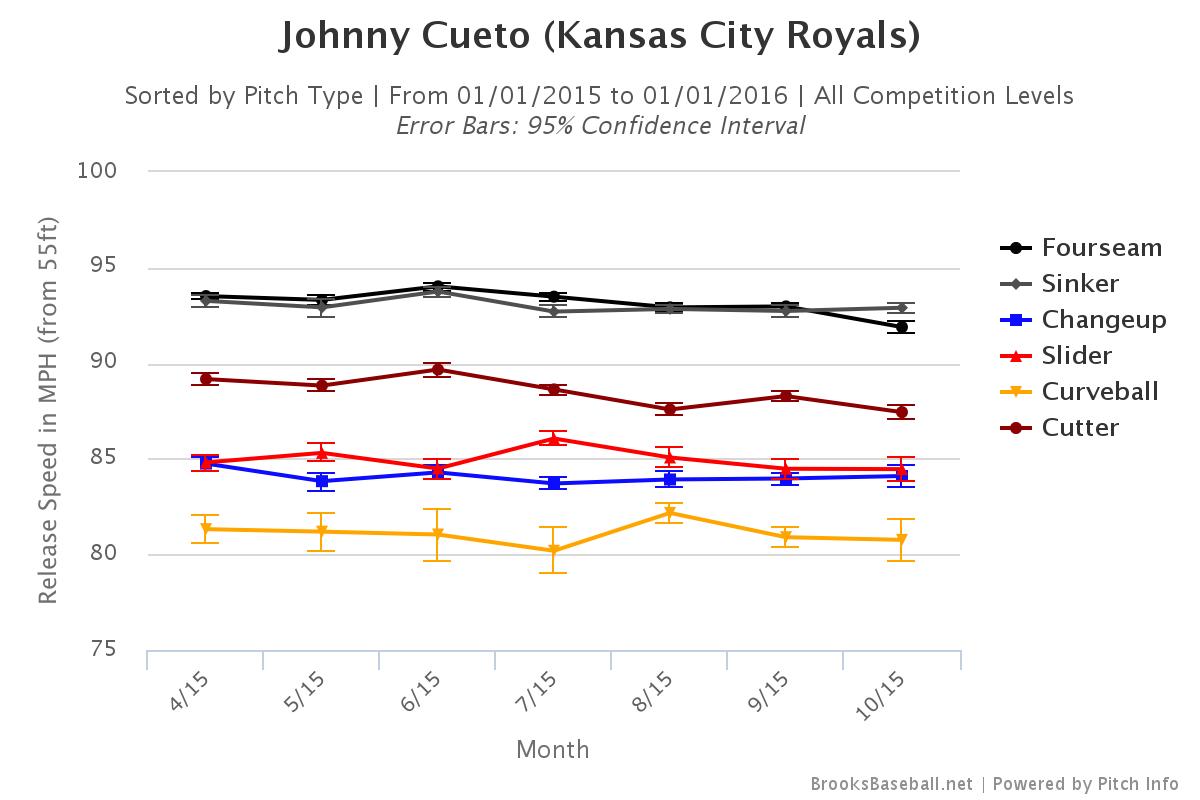 Both fastballs dropped in velocity a bit after the first three months of the season. The cutter—which is basically another type of fastball—declined, too. None of the changes were dramatic, but something at least looks different there.

Cueto's pitch usage didn't change dramatically, but let's take a look at what he was using before his first awful start on August 21 and what he's thrown since then.

Again, there's nothing dramatic here, but he has gone to the slider, sinker, and cutter a bit more and the four-seam fastball, curveball, and changeup a bit less. Here at the differences in his swing-and-miss rates over those two stretches.

It seems Cueto isn't fooling hitters with his breaking balls, and he's gotten fewer whiffs with the four-seam fastball, too. He didn't get any of them with his curve, but it's a pitch he rarely throws and not a significant amount of data on it. The changeup still seems to be just fine in that regard. But finally, let's look at the slugging percentages against his pitches before and after August 21.

Those are stark differences in every pitch but the changeup, even that has seen a bit of an uptick. Opposing hitters have hammered pitches that they previously did not.

If it all still seems a bit mysterious, well, maybe it is. Jeff Sullivan dug into Cueto's numbers at Fangraphs in early September and similarly didn't see any major red flags. That was a very small sample at the time, but Cueto has pitched poorly since then, too.

Whatever the case is with Cueto, he's been really bad. If the Mets can take advantage of that against him in Game 2, they'll have a very good shot at coming back to Queens with the World Series tied at one game apiece.