Both the weather and game were awful for the Mets this afternoon.

Bryce Harper and the Nationals sunk the Mets 3-1 in the first game of Saturday's doubleheader. Noah Syndergaard was again excellent, but the Met offense remained largely dormant and the infield defense demons reared their ugly head late. Addison Reed had his first slip up as a Met, surrendering the game winning home run to Bryce Harper in the eighth inning. 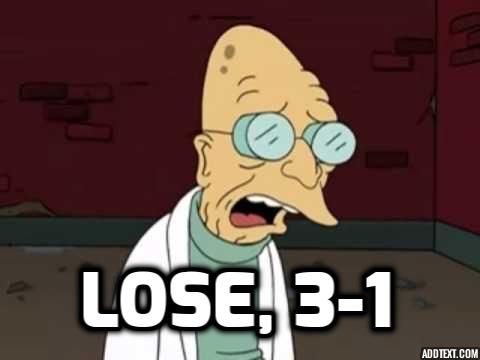 Offense was in short supply in this game, as both teams were scoreless through six innings. Noah Syndergaard was flat out dominant, escaping his only jam in the third inning by striking out Anthony Rendon and getting a fly ball from Yunel Escobar to strand two Nationals in scoring position. Gio Gonzalez got a lot of help from the wind, which held Travis d'Arnaud's deep drive just in the yard for a double instead of a home run and pushed David Wright's high fly ball just foul down the left field line. The Mets also wasted several opportunities, stranding d'Arnaud at second in the first and leaving the bases loaded in the third.

In the seventh inning, Syndergaard finally faltered, allowing a leadoff home run to Clint Robinson to put the Nats ahead 1-0. He settled down and got through the next three batters with ease, ending his outing at seven innings with ten strikeouts, two hits allowed, and only one walk. Despite his dominance for the second consecutive start, Syndergaard was in line for the loss as he headed to the dugout. The Mets, however, ralied in the bottom of the seventh, scoring their first run in 23 innings on a Juan Lagares single up the middle. Syndergaard was off the hook and the game was tied at one.

In the top of the eighth, Addison Reed seemed to have Anthony Rendon struck out on a pitch on the outside corner (a pitch better than the one called a strike in the same at bat, clearly on the border of the zone according to Fangraphs). Instead, Reed didn't get the call and waked Rendon on the next pitch. Yunel Escobar then hit an easy ground ball to Daniel Murphy which should have been a double play. Instead, Murphy booted the ball, and while he managed to get it to second, Ruben Tejeda's rushed throw was off line and Escobar was safe at first. Reed then hung a slider to Bryce Harper who launched it into the Pepsi Porch for his 42nd home run of the year and a 3-1 Nationals lead. Fittingly, Reed ended the inning with a strikeout of Jayson Werth on a pitch that was clearly more out of the zone than the pitch called a ball to Rendon. Robot umps please.

The Mets did nothing in the bottom of the eighth, and Jon Niese again looked mediocre in a relief appearance in the top of the ninth. He allowed a leadoff hit to Clint Robinson (a lefty) who was then thrown out at second by Yoenis Cespedes. He later walked Matt den Dekker (another lefty) before picking him off to end the inning. Niese has never been more effective aganst lefties than righties, and has been a below average pitcher for a good while now - if his stuff does not play up in the bullpen, even in a lefty-specialist role, he has no place on the postseason roster.

In the ninth, Matt Williams brought in Felipe Rivero, the same pitcher Wilmer Flores burned for a walkoff home run earlier this season. Alas, there would be no heroics this time around, as Rivero struck out the side and secured his second career save.

The loss puts the Mets a game behind the Dodgers for home field advantage with two games left. The Mets do hold the tie breaker, so regaining the lead is no herculean task. Still, the Mets no longer control their own destiny in regards to home field, and need to hope for a Dodger loss either today or tomorrow.