The 24-year-old throws very hard, but he finished the regular season with a 4.08 ERA.

Signed by the Royals out of the Dominican Republic in 2008, Ventura made his major league debut in 2013. He made three major league starts that year with pretty good results. He spent the entire 2014 season with the team and finished the year with a 3.20 ERA and 3.60 FIP in 183 innings over thirty starts and one relief appearance. He's been at the center of several benches-clearing incidents in his brief major league career.

Despite the velocity, though, Ventura hasn't quite been an elite strikeout pitcher in his major league career. His rate of 8.60 strikeouts per nine this year was better than the American League average for starting pitchers of 7.26. It also ranked 31st among the 133 starters who threw 100 innings this season. At 3.20 walks per nine, he was slightly below-average, and his 0.77 home runs allowed per nine was above-average.

Ventura has racked up strikeouts at a higher clip in the four postseason starts, at 10.7 per nine. But he's walking batters more often, too. He's also had a home run problem, having given up three in 17.2 innings—a rate of 1.53 per nine innings. Four starts is a tiny sample, of course, but it would be nice if the home run problem continued tonight at Citi Field.

As hard as he throws, Ventura's fastballs have been a bit slower this year than they were in 2014. His curve has increased in velocity, while his change is very slightly slower than it was last year. 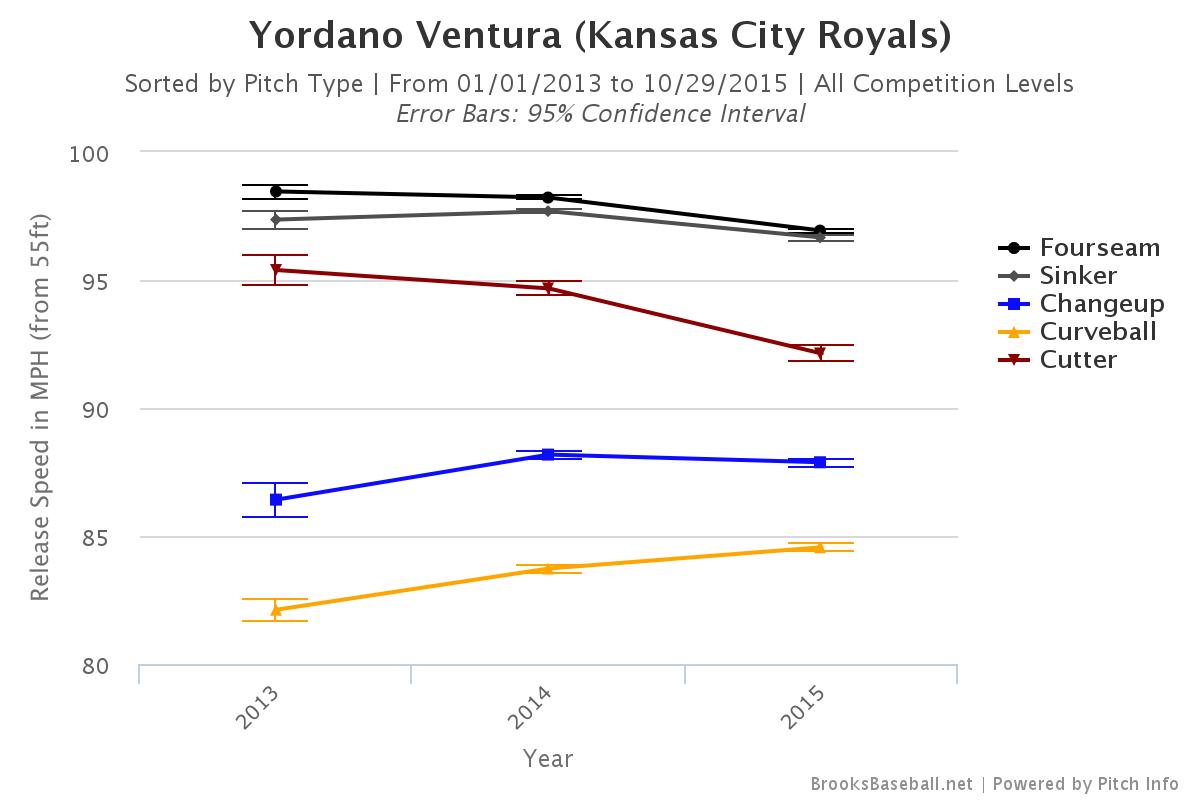 It's been a feast or famine season for Ventura, who gave up four or more runs in 11 of his 28 regular season starts but gave up two runs or fewer in 14 of those starts. In the postseason, he's given up three runs in three of his starts—which lasted just two, five, and five-and-one-third innings, respectively—and one run in five-and-one-third in his most recent start.

Ventura has thrown his curve 24.1 percent of the time, but he rarely uses it early in the count, occasionally uses it when the count is even, and uses it heavily when the batter is behind in the count. Rounding out the mix are his changeup, at 13.9 percent, and his cutter, which at 4.0 percent is a relative rarity. In his playoff outings, Ventura hasn't strayed far from the overall numbers, but he has thrown his curve a bit more often.

Finally, Ventura hasn't had a significant platoon split this year. He struck out lefties more often than he did righties, but he also gave up home runs at a higher clip to lefties. The Mets have at least a few of them in the lineup, with Curtis Granderson, Daniel Murphy, and Lucas Duda starting regularly. They could have a fourth if Terry Collins plays Michael Conforto rather than Juan Lagares tonight.

Considering Ventura's short postseason leash and mediocre results, it would be ideal if the Mets scored early on him, especially since Johnny Cueto's complete game in Game 2 gave the entire Royals' bullpen a night off.