With little room for error, the Mets look to take advantage of home field and score their first win of this World Series.

After never falling behind by even a single game in the NLDS or NLCS, the Mets find themselves deep in a hole against the Royals in the World Series. There's no reason for despair, though, as New York still has the luxury of putting a quality starting pitcher on the mound every night.

That sexy starting pitching hasn't proven to be an advantage so far, but perhaps the younger pair of hurlers making their World Series debuts in Game 3 and Game 4 will follow a better game plan than Jacob deGrom and Matt Harvey did. Yes, the Royals are awesome at making contact. We've been over that before. But the Mets can do a much better job of not helping them make contact. In Game 2, deGrom kept throwing the ball inside the strike zone, even when he was ahead in the count.

"Of the Royals' swings, an amazing 75% of them were attempted at strikes.

Recall that, ordinarily, the Royals would be around 55%, and the same would go for deGrom. This was somehow even more extreme with two strikes. This year, the regular Royals hitters averaged 47% swings at strikes in two-strike counts. On Wednesday, they finished at 80%. In two-strike counts, 20 of the 25 Royals swings were at probable strikes. When you have a contact-oriented team going after that many pitches over the plate, you're just not going to see whiffs. The whiffs exist elsewhere. They're generally not going to be in the zone."

Kansas City's tendency to swing at a bunch of pitches means they also don't take very many pitches (they're last in the American League in walks for a reason). Therefore, the best way to get the Royals to strike out is by throwing outside of the strike zone. Whether by design or not, deGrom failed to do that on Wednesday, and that's an adjustment that has to be made for Mets pitching this weekend.

Tonight's starter Noah Syndergaard loves pounding the zone with his fastball as much as the rest of the Mets, but he also has a wicked curveball and sinker that he can use to lure opponents into swinging at junk. If I'm Dan Warthen, I'm telling Syndergaard to be as liberal as he can with his secondary stuff when the count goes in his favor. If that runs up his pitch count, the Mets have more than enough capable bullpen arms to finish the job.

An exception to that strategy is Alex Gordon, the most selective Kansas City batter who leads the team in on-base percentage and walk rate. Despite this, Gordon appears to be the only Royals player whom the Mets don't care to throw strikes to. Of the five walks issued by New York starters this series, Gordon has three of them. As the only Kansas City regular with a strikeout rate above 20 percent, Gordon is the one guy you can try to sneak a fastball by, but the Mets have played into his hands so far.

Another adjustment the Mets can make in Game 3 is to stop managing the game like it's taking place in the middle of June. We've seen Terry Collins have no issue challenging a close call in the first inning, even if it means going without a challenge for the next five. Now that we're in the World Series, he doesn't feel like challenging a close play at first base in the 14th inning? With two challenges in his pocket and an unlimited number of crew chief reviews? On a play that put the winning run on first base? That was perplexing to say the least. 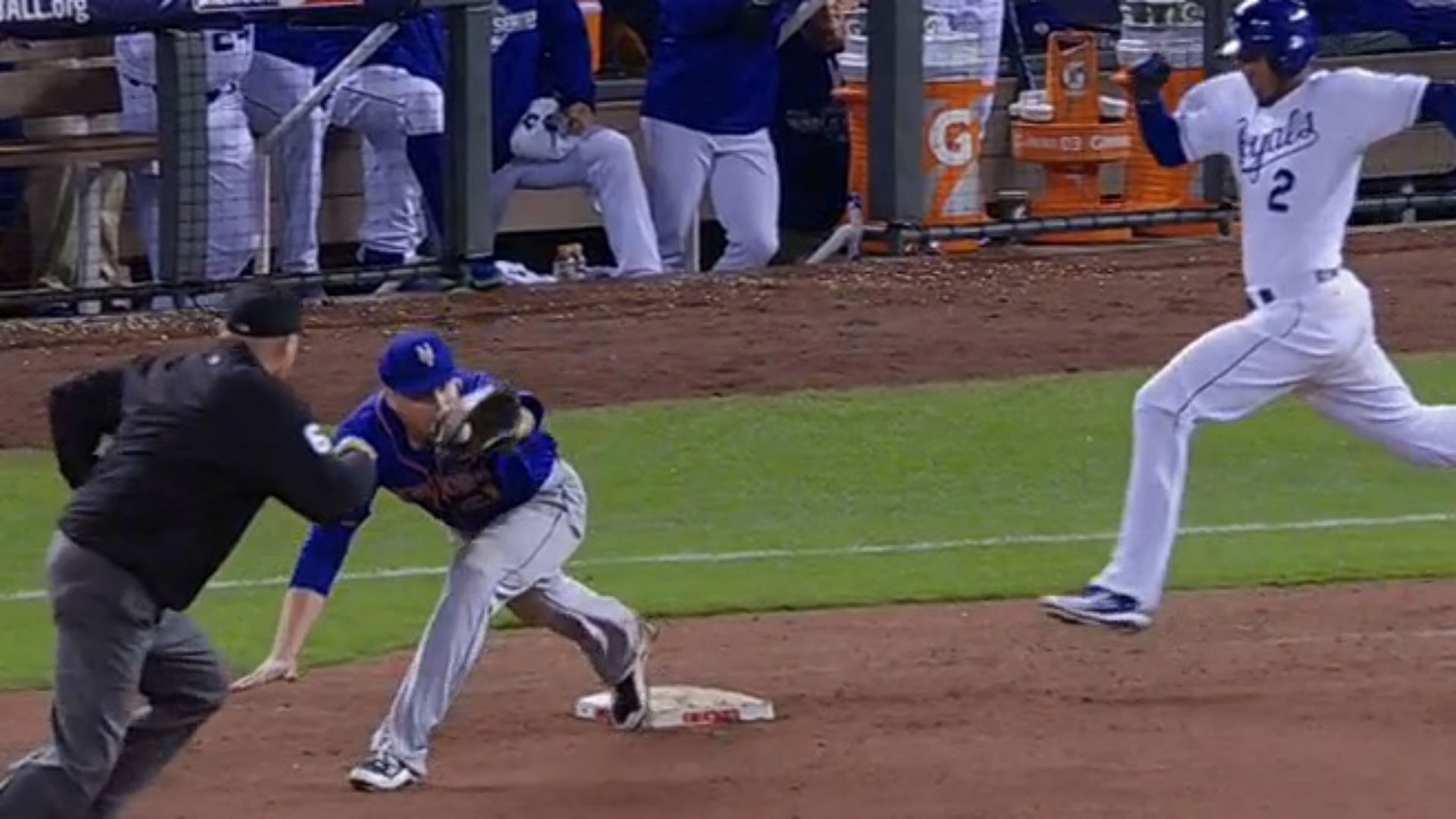 It was almost as confusing to watch Collins leave deGrom in Game 2 like he was a rookie that the skipper wanted to build confidence in. We all could see that the right-hander was not missing Kansas City's bats during the fifth inning, so to watch him give up singles to Kendrys Morales and Mike Moustakas was frustrating. The left-handed Sean Gilmartin finally got into the game three innings later to record a couple of meaningless outs in the eighth.

Strategy won't be an issue, however, if the Mets can score some runs off of Royals starter Yordano Ventura. The hot-headed 24-year-old was known more for inciting brawls than quality pitching in the first half of the season, but he's been more effective in the past three months. Ventura's final two outings in the regular season were particularly intimidating, as he allowed just one run in 14 innings, but that has not carried over into the postseason.

In four starts on the road to the World Series, Ventura has 21 strikeouts in 17.2 innings but also eight walks. He has allowed exactly three runs in each of the first three outings but just a single tally in the most recent one. Still, none of those went beyond the sixth inning due to pitch count or game situation. As a hard fastball thrower, you'd think that Ventura would be able to work deeper into games, but he sometimes has trouble harnessing his stuff, as evidenced by his 3.20 walks per nine innings this season.

Chris McShane did some research and found that Ventura will throw mostly fastballs early in the count or when behind, so the Mets should do their best Kansas City impression tonight and be aggressive when they have the advantage.

With another right-hander on the mound for the Royals, it will be interesting to see if Collins goes back to his Game 1 lineup (minus Kelly Johnson at designated hitter). In Game 2, he put Michael Conforto at DH and let Juan Lagares play center field, but Lagares's arm didn't look great that night and he even let a fly ball get over his head. I'm guessing that it will be Conforto in left and Yoenis Cespedes back in center tonight.

Another possible tweak could involve Lucas Duda moving up in the lineup, as he has multiple hits in his last three games. It's more likely, though, that Collins will keep the top part of the order the same in order to alternate his left-handed and right-handed bats.