Delta Air Lines is shuttling 80 fans to Games 3 and 4 via the Amazin' Mets Express. Fans yesterday got to ride alongside Mike Piazza and Jim Breuer.

Share All sharing options for: Riding the Amazin' Mets Express with Mike Piazza and Jim Breuer

Days before World Series Games 3 and 4, Delta Air Lines began sending clues on Twitter. The lucky fans that unraveled the mysteries were given a seat on the Amazin' Mets Express: a water taxi that would depart from Pier 11 with a final destination of Citi Field.

Before the shuttle took off, we were able to ask both a few questions.

Mike Piazza: Well, I mean, it's a whole different level with the World Series. I was fortunate the last one was the Subway Series, and again, its something. You know, just to be in front of the fans for those few moments. When you're playing it's nice because when you retire you realize how much you miss seeing them every day. Unfortunately, you can't play forever but when you get these moments, you're fortunate to be embraced the way I've been embraced by the Mets fans. It's definitely an honor.

RB: Most of the Mets' players are very young and have never been to a World Series. Do you have any advice for the players for when they are preparing for the game, especially for Travis d'Arnaud?

MP: Just relax. Relax and enjoy it. I think to just enjoy playing with your teammates. Enjoy the moment because you never know. I'd like to believe that they're going to be back here soon. But for me it was the one World Series I had and unfortunately we didn't win, but the energy is just something you'll never be able to duplicate when you're done playing. Just embrace the moment and enjoy it, relax, have fun, and try not to put too much pressure on yourself.

RB: As a Mets fan yourself, how has it been watching this team throughout the season? Were there any moments that stood out for you?

MP: Frustrating at times because again, I've become that psycho sports fan. I didn't realize when I played and now when I watch I realize how many times I frustrated people. But that's the fun part about it. My wife always jokes, "You would've thought you've never made an out!" But, I did, even though I don't tell anybody that. But it's fun because at first you're tired. It was a little sad because you realize one part of your life is coming to an end and you got to turn the page and do other things. But then also then you realize it's in your blood and it will always be a part of you so it's fun to reconnect.

RB: To bleed to blue and orange in a new way.

RB: Thank you so much.

MP: My pleasure. Thank you, thank you.

After a wonderful conversation with Piazza, we spoke with Jim Breuer.

RB: As a fellow Mets fan, I'm sure you've been following the team all season. Are there moments that stand out for you?

Jim Breuer: There's a couple. I was there for the Wilmer Flores night when he cried and I'm really glad it happened. Something happened that night that is exciting on a different level that I thought was magical.

One little moment that was lost was Duda, although the Mets got beat I think 7-3 or 7-4, Duda hit three home runs that night. His last at-bat, the most incredible guy, he saw my daughter. He tossed her the ball and she caught it. He went up, hit his third home run, hit home plate, pointed at her and gave her a big smile as if, "Hey, that was for you."

And then I have to say one of my favorite moments the whole season, there were a couple, but one of the favorites was watching Steven Matz pitch for the first game. Seeing his family, his grandfather. I think I was crying when I made that Facebook video and I said, "You have no clue. I'm so excited for you. This kid's going to bring us to the promised land." It was one of the happiest videos I've made. I was so excited for a Long Island kid, a die-hard Mets fan and now here he is at Citi Field having the game of his life, with a team who couldn't even hit. He drove in all the runs. So that was huge.

And then when they swept the Nationals. That to me was one of the greatest of the whole season. That was such a good feeling.

RB: How did you become a New York Mets fan?

JB: Since I was a kid I loved, you know, I've tried to figure this out. Why'd I chose the Mets over the Yankees. And I remember the Yankees, I loved Mickey Rivers and Roy White, Chris Chambliss, Thurman Munson. But there was something about the Mets. I was only four years old but I loved Bud Harrelson and I loved Felix Millan. I loved Wayne Garrett and I would imitate all of them, Koosman and Seaver, Tug McGraw. Those are my memories. Lindsey Nelson, Ralph Kiner, Bob Murphy. Those announcers, I feel like they were a part of my family. Growing up I'd be in the yard and in the street with six double-A, triple-A batteries listening the game while we played a whiffle ball game. "There is a beautiful game here at Shea, I'm Bob Murphy." I just never turned back. I went to the games and even through their horrible years I just loved the Mets.

RB: If you had the opportunity to be signed by the Mets for a one-day contract, what position would you want to play?

JB: I think I'd have to, I'd only have one choice. I'd have to play first base.

JB: I can catch a ball. I don't feel like chasing a lot of balls and not a lot of ground balls are hit to first. Hopefully they won't be bunting a lot that day, and whoever is on the mound can cover me. That's the position I would go for.

RB: Everyone loves the first baseman.

JB: Everyone loves the first base guy and I get to talk to everyone as they make it to first.

RB: Thank you so much for speaking with me.

JB: You're very welcome. Thank you.

Amazin' Avenue learned a lot from Mike Piazza and Jim Breuer. We learned that, like the rest of us, Piazza is a psycho sports fan. We learned that Breuer would sit and listen to the radio outside, which many of us can relate to.

After the interviews, the fans went with Piazza and Breuer, christened the boat with some smashing of champagne, and were on their way to watch the Mets take a victory in Game 3 against Kansas City. 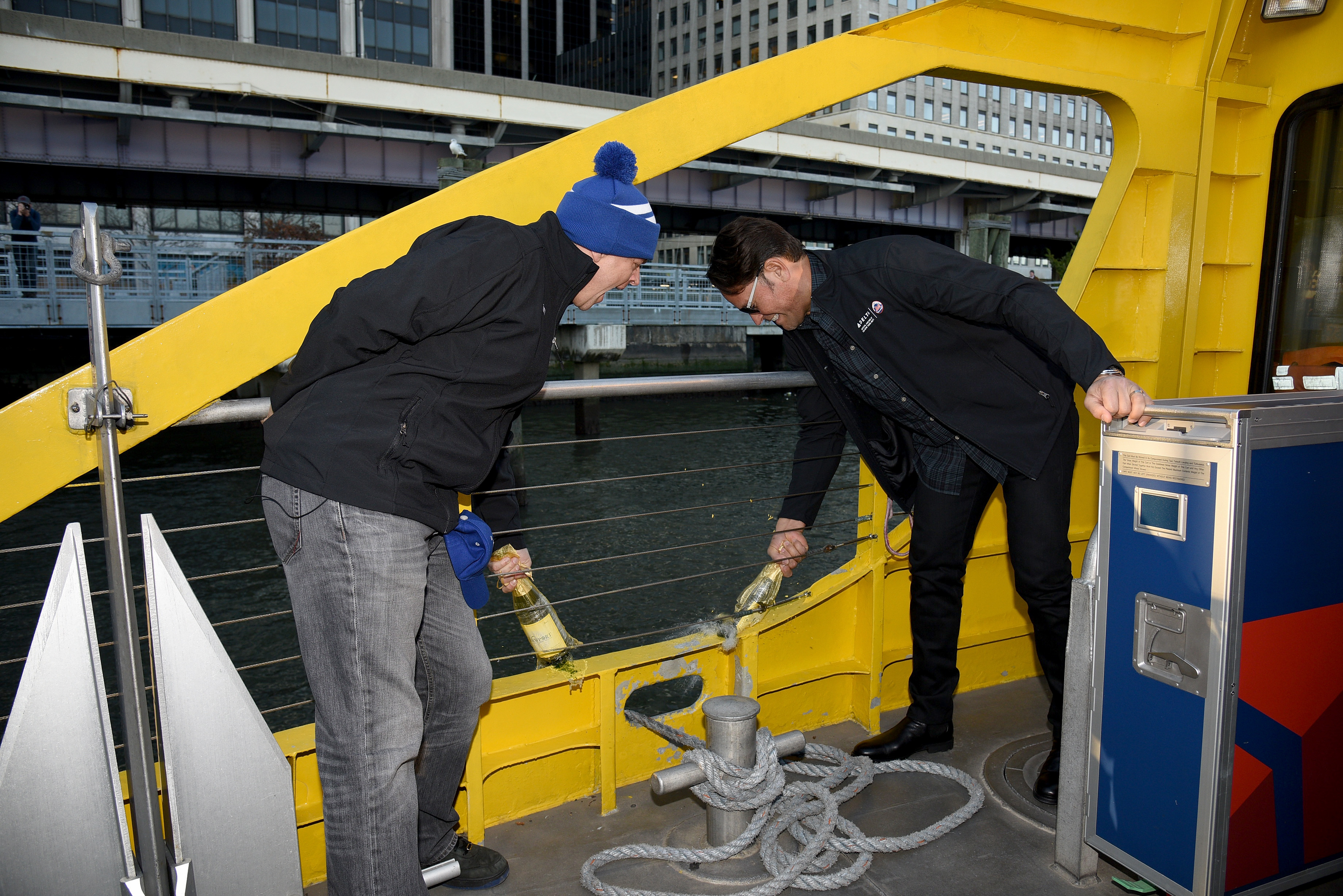