A part of one of baseball's very best broadcast booths for twenty-two years, Majkowski enjoys and appreciates what he does for a living.

Mets fans haven’t always had a great team to root for, but they have been treated to outstanding broadcasts of the team’s games on the radio and television for decades. The current incarnations of those booths are beloved: Gary Cohen, Keith Hernandez, and Ron Darling in the SNY booth for TV, and Howie Rose and Josh Lewin in the WOR booth for radio.

Chris Majkowski, the producer and engineer who operates behind the scenes in the radio booth, isn’t exactly an unknown among die-hard Mets fans. He hasn’t taken a day off in over twenty years, a streak that has had Howie Rose calling him "‘The Immortal’ Chris Majkowski" on broadcasts for years. And his Twitter feed, @MetsBooth, is popular.

Majkowski doesn’t really think of what he does as work. He considers his seat the best one in the house, or at least the next-best to Rose’s seat. He clearly appreciates that he gets to do what he does for a living and thoroughly enjoys it.

A lifelong Mets fan, Majkowski who grew up in Albertson, a town in Nassau County, and graduated from Fordham University in The Bronx, where he got the radio bug while working at WFUV, the school’s well-regarded radio station. He remembers the first game he attended as a child, sitting in the back rows of the field boxes at Shea Stadium for a double-header between the Mets and Reds on a sweltering day. But it was tough to see much of anything from those seats, and they only stayed for the first game.

His first vivid memories of sports came in 1973: the Mets’ playoff push late in the regular season, Rusty Staub dislocating his shoulder against the A’s in the World Series, and literally running home from school to catch playoff games—which were all played during the day—on the black-and-white television in the basement at home.

Majkowski got his start in the radio business about a year after he graduated college when Bob Jewell, who was the chief engineer at WFUV, told him he knew a couple of guys that were looking for someone who could handle radio equipment and had an understanding of sports, someone who could keep a scorecard and know when timeouts were coming up to assist the broadcasters.

"Oh, well that sounds like something that would be up my alley," Majkowski thought.

So he started with those guys: Joel Blumberg and Brian Ferguson. Some of the first games he worked were Hofstra football and Islanders hockey. And he worked his first baseball games at Shea for visiting broadcasting legends Harry Caray of the Cubs and Harry Kalas of the Phillies.

"Harry Caray was funny because I had to go and find him to record the manager’s show. Harry didn’t do anything when he recorded the manager’s shows, except he took a hold of the microphone. You had to go with a tape deck at the time, hand Harry the microphone, tell him, ‘okay, we’re recording,’ hit a stop watch, and signal," he says as he holds up one finger at a time, "one minute, two minutes—because you’re supposed to do four minutes—three minutes, four minutes, and then he knew we had to wrap it up." 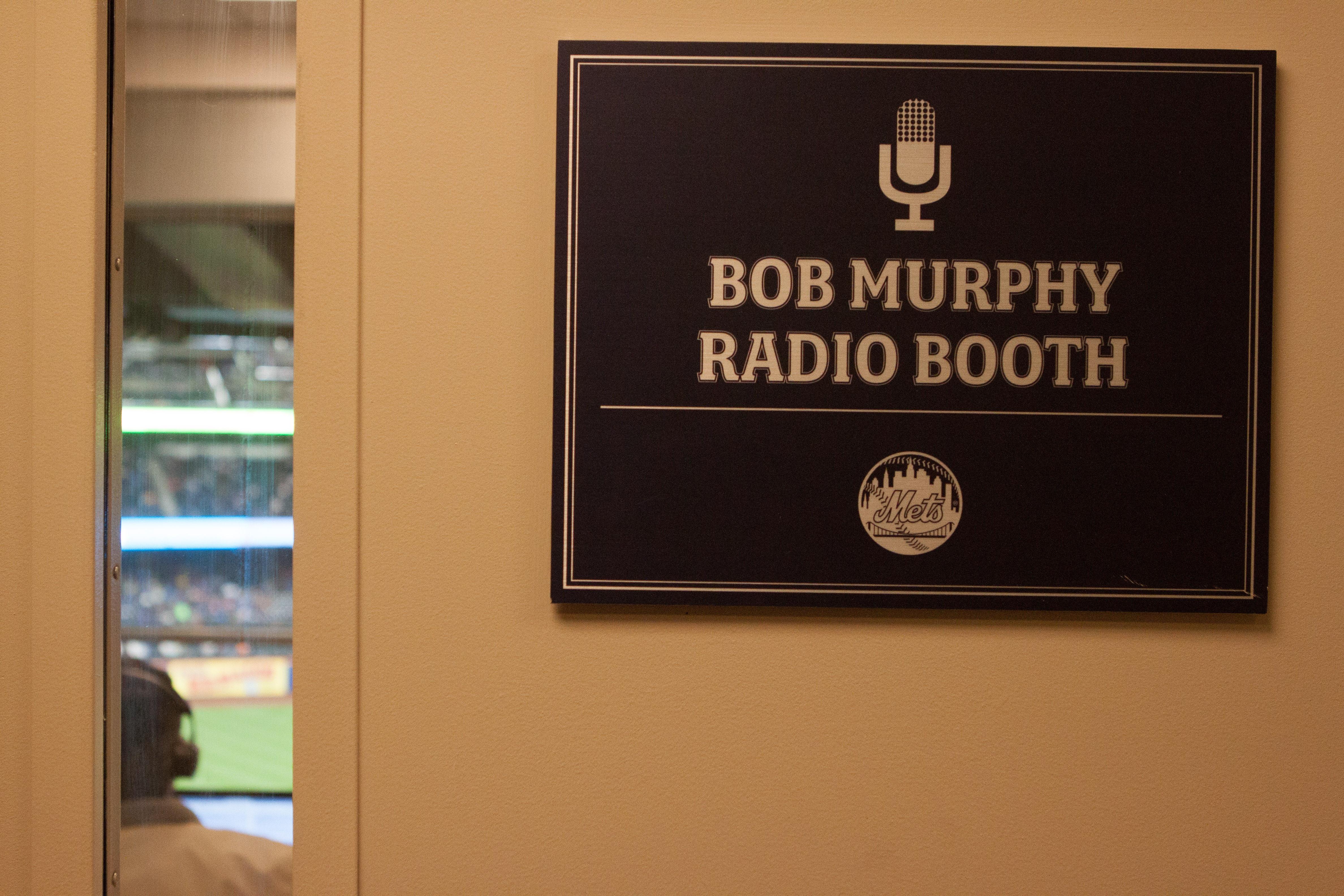 The technology in the booth at the time wasn’t nearly as advanced or useful as what’s available today. Majkowski filled out lineup cards for Murphy with home run and RBI totals. He laughs a bit and says, "We didn’t get into the on-base and the slugging and everything else that we pull in today."

Out-of-town scores, which can be tracked easily in real time in a number of ways now, were a bit of a production.

"A home run had a certain rhythm to it" -Chris Majkowski

He did some work at Madison Square Garden, too, and the Mets’ gig opened up in 1993. He went to work with Bob Murphy, the Mets’ own legendary broadcaster, and Gary Cohen in the radio booth.

"We used to have this sports ticker and this roll of paper that would keep spitting out. And at that time, it made a bit of a racket, but if you were doing it long enough—it was a dot-matrix printer," he says as he mimics the sound of it. "If you did it long enough and you were sitting next to this thing for hours upon end like I was, a home run had a certain rhythm to it. You know somebody hit a home run, not even by looking at it, just by hearing how that thing was going—'oh, that’s a home run, I better check that out.’" 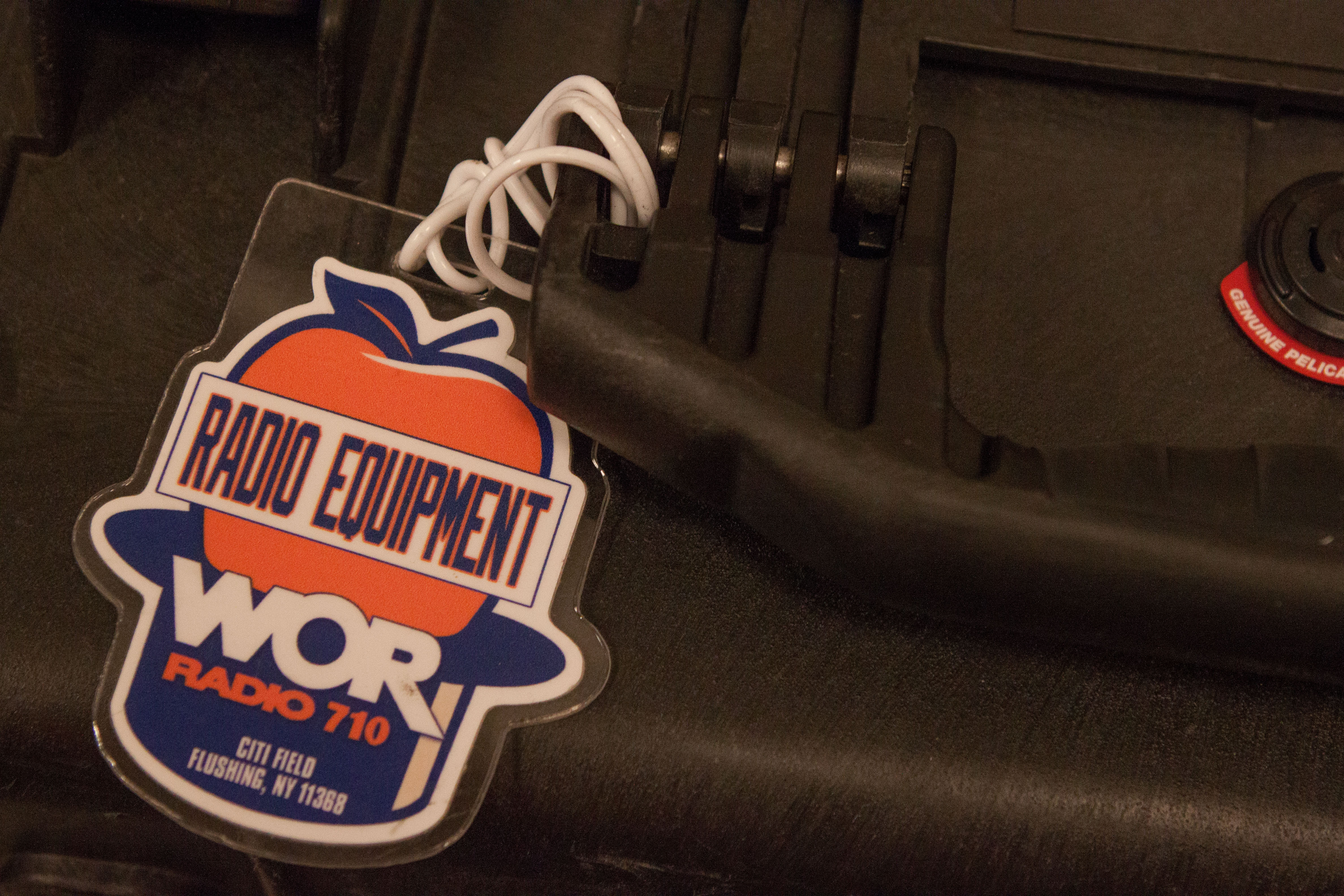 A couple of decades later, he might not feel like he’s at work, but Majkowski says the longest days are the first days of a road series or a home stand. He sets up the booth on those days—running cables and checking mics—and is naturally fond of long home stands.

There isn’t quite as much work to do before the following games of a series, but there are still things that need to be done. There’s research for ‘This Date in Mets History’ and the compilation of clips from MLB.com and the piecing together of the pre- and post-game shows.

My conversation with 'Maj' took place during the next-to-last game of the Mets' regular season. It’s late in the game, and Max Scherzer is in the midst of pitching a no-hitter against the playoff-bound Mets. Jerry Seinfeld has just departed the booth after an impromptu guest appearance on radio following his appearance in the SNY booth. 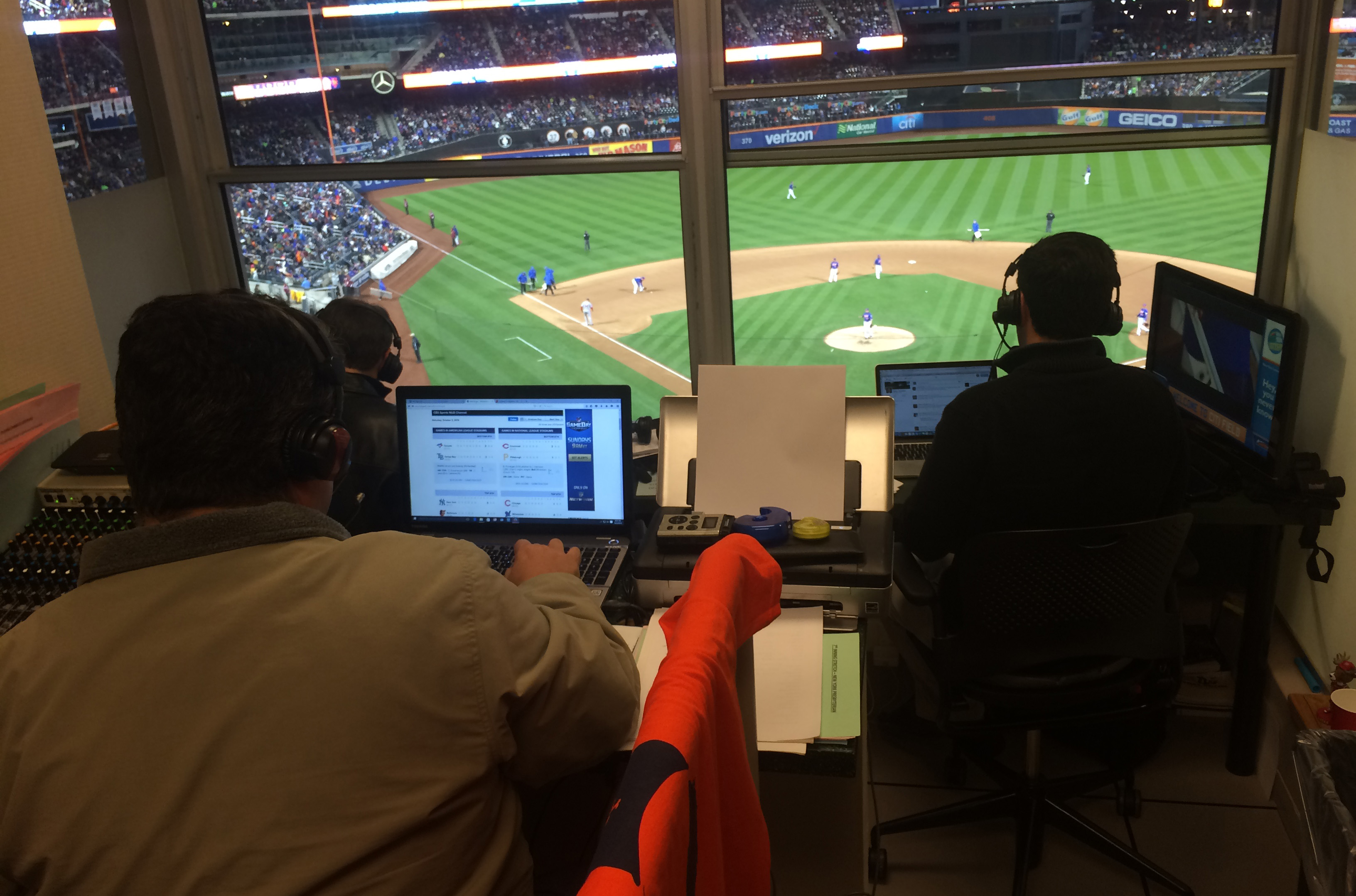 The game is zipping along, but Majkowksi, Rose, and Wayne Randazzo, who handles the pre- and post-game shows but is filling in for Rose's regular partner, Josh Lewin, as co-host, have to make up for lost time. The regular mix of promotions went out the window while Seinfeld was visiting, but they all still have to be worked into the broadcast.

So Majkowski rapidly exchanges sheets of paper with both Rose and Randazzo, making it all look seamless as he tends to all of his other regular duties. His left hand operates the sound board, which has microphones all over the place, while his right mostly works on his laptop. To the right of the laptop, there’s a small, portable printer, which spits out the parts of the broadcast that Majkowski writes and passes up to the broadcasters.

To the left of the laptop, there’s a stopwatch, which he still uses to time commercial breaks, even though he has a finely-tuned mental clock for such things. And there’s a small recording device, too, for saving things on the fly and piecing them back together later.

Majkowski is essentially the drummer of the band that is the Mets’ radio broadcast. Constantly doing multiple things at once, his desk—on which his rig fits perfectly—is slightly elevated and a sits a couple of feet behind the broadcast’s front-men. He’s the backbone of the production, keeping everything in order and working with the broadcasters in front of him to maximize everyone's collective talent.

And like any good drummer, Majkowski has a great sense of humor. He has, on at least a couple of occasions, worked pranks into the scripts he writes. And at least one of those jokes once made it on the air a couple of years ago, even if that wasn't necessarily the intention.