Mets playoff preview: Clayton Kershaw is still on top of his game

The Mets face one of the very best pitchers in baseball in Game 1 of the NLDS.

Share All sharing options for: Mets playoff preview: Clayton Kershaw is still on top of his game

Clayton Kershaw is the best pitcher on the planet. He probably won’t win the Cy Young award this year because of a slow start this season and the performances of teammate Zack Greinke and Cubs ace Jake Arrieta. But Kershaw’s track record is the longest, and his performance this year has been about as impressive as anything he’s done in his career.

While Kershaw’s 2.13 ERA is a tick above the 1.83 and 1.77 marks he had in 2013 and 2014, respectively, his 1.99 FIP is the second-best single-season mark of his outstanding career. The driving force behind his FIP this year is a career-best strikeout rate of 33.8 percent. That’s the highest single-season strikeout rate Kershaw has ever posted, and it’s the best rate in Major League Baseball among qualified starting pitchers.

Kershaw pounds the glove-side, lower part of the strike zone. From Brooks Baseball, here's where he tends to locate pitches against lefties. All of these zone profiles are from the catcher's perspective. 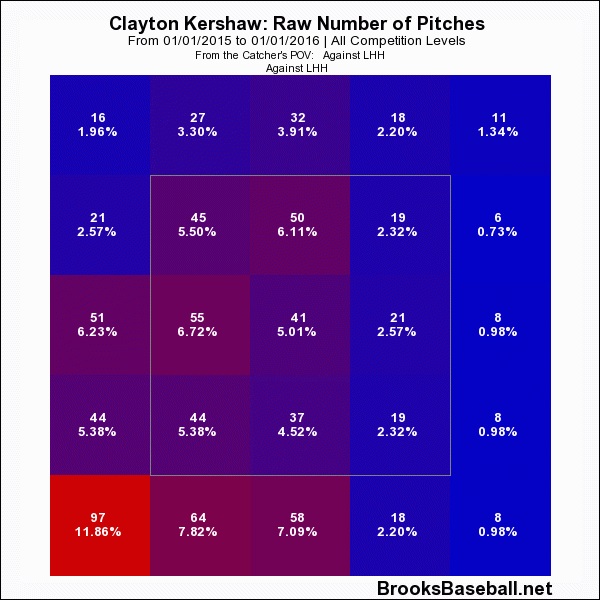 And his pitch location against right-handed hitters looks pretty similar. 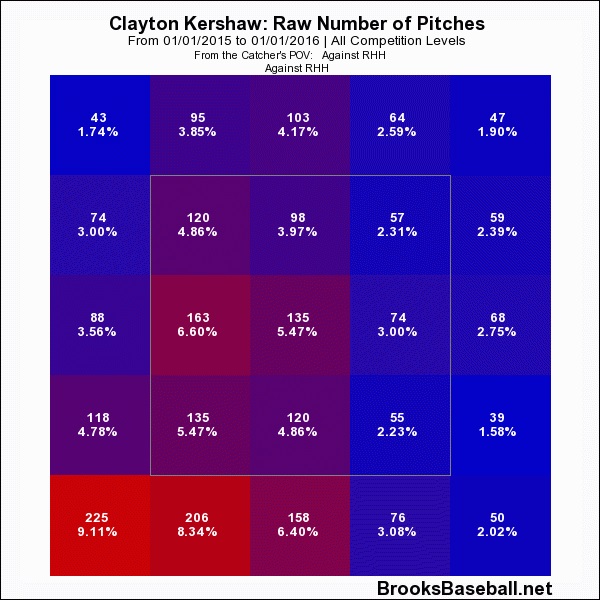 When he's pitching in those areas—low and inside to righties and low and away to lefties—Kershaw is dominant. And he tends to do that a lot. Based on slugging percentage against, he does have some relatively weak spots when he gets away from that area. Here's a zone map of left-handed opponents' slugging against him this year. 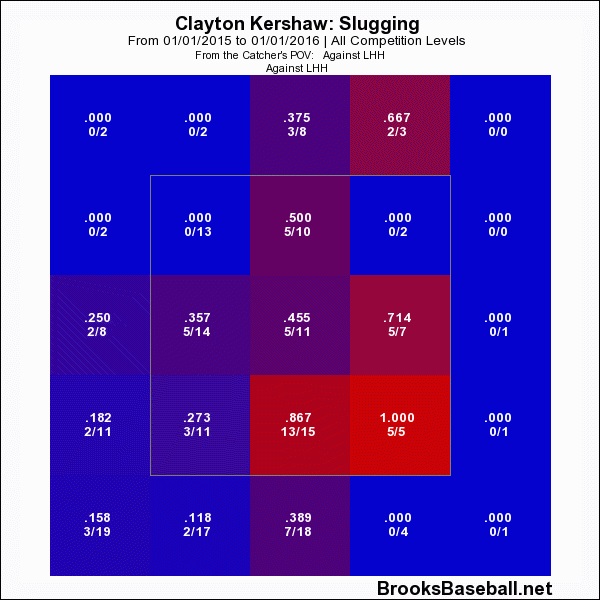 And here's the same thing for this year's right-handed opponents. 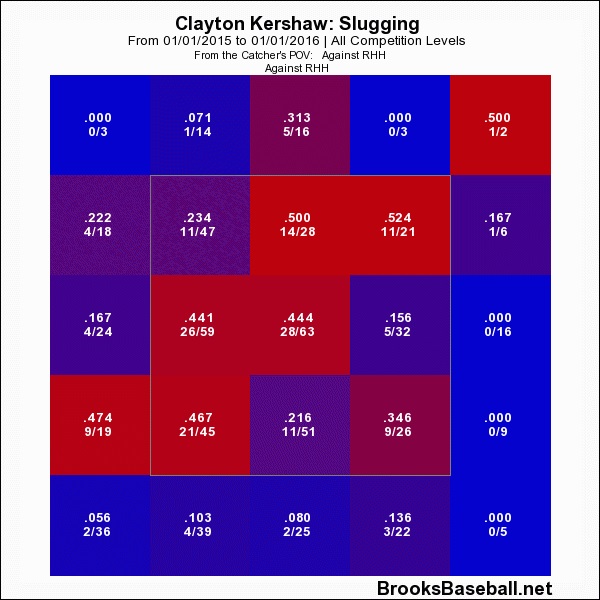 Kershaw is, of course, an intimidating pitcher. If the Mets' lineup is going to succeed against him, it will have to take advantage of whatever few pitches he might leave in hittable parts of the strike zone. And while he's dominant against both left- and right-handed hitters, he has been death to lefties this year and throughout his career and something very slightly less than death to righties.

It sounds like the only position at which the Mets will employ a platoon against him is in left filed, where Michael Cuddyer will start over Michael Conforto, even though Conforto might be the best-equipped left-handed hitter on the team when it comes to facing left-handed pitching.

It's tough to really find any significant weaknesses with Kershaw, but the Mets will have to take advantage of the rare mistakes in other parts of the zone, especially those of the Mets' hitters that bat from the right side.