A look at the hitters Mets pitchers will face in the NLDS.

The Mets are set to begin their first playoff series since 2006 tonight against the Los Angeles Dodgers. Los Angeles scored 4.12 runs per game this season, just above the National League average and one-tenth of a run less than the Mets’ 4.22 runs scored per game.

Of the sixteen Dodgers hitters who have made at least 100 plate appearances this year, eleven have hit better than league average, judging by wRC+. Let’s take a look at the hitters who Mets pitchers are expected to face in this series. For context throughout, the average major league position player hit .258/.321/.412 with a 19.9 percent strikeout rate and a 7.8 percent walk rate. We’ll run down this list by descending wRC+.

There’s not a ton of data to work with, but here are Brooks Baseball’s zone profiles for his swinging strikes—"whiffs"—and slugging percentage. 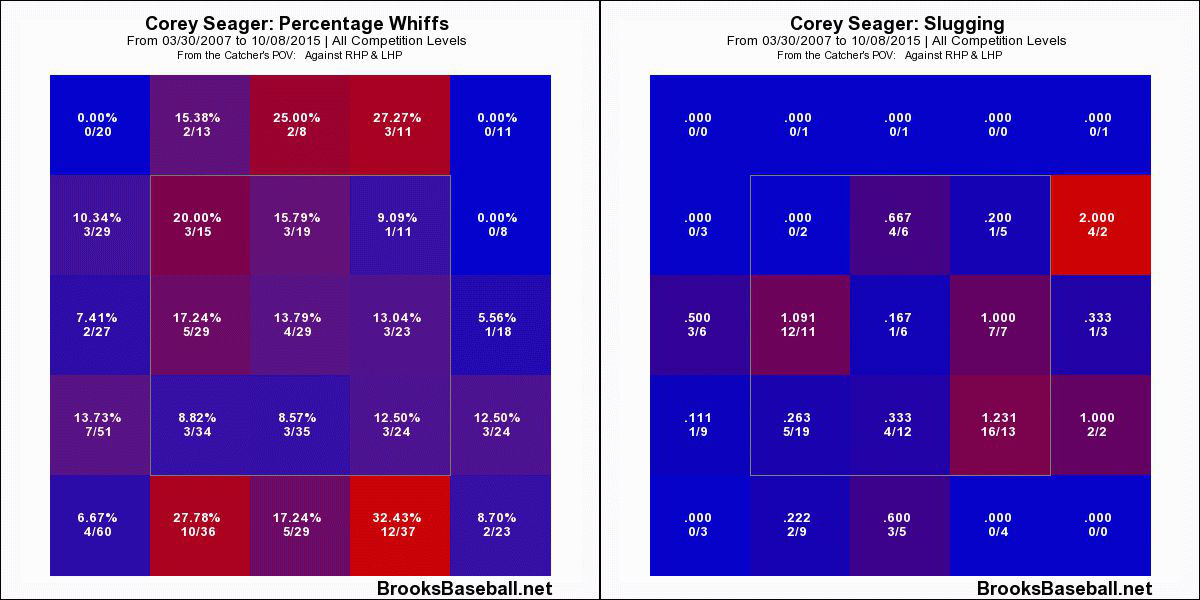 Thus far, Seager’s swinging strikes have come on pitches over the plate but above or below the strike zone. Because of the small sample of data, the slugging profile above is skewed by that area up and in, but he’s mostly thrived on inside pitches. If the overall data is a small sample, his major league splits carry even less weight, but so far, he’s fared slightly better against right-handed pitching.

Of the Dodgers who have been with the team all season, Turner’s 141 wRC+ leads the team. A league-average-ish hitter in his time with the Mets, Turner has turned his career around after he was non-tendered by the Mets following the 2013 season and nearly didn’t make the Dodgers’ roster to start 2014. But he hit .294/.370/.491 with 16 home runs this year, not quite matching the numbers he put up last season as a part-time player but still doing very well. His walk rate is a bit below average, but like Seager, his strikeout rate has been a bit better than average. 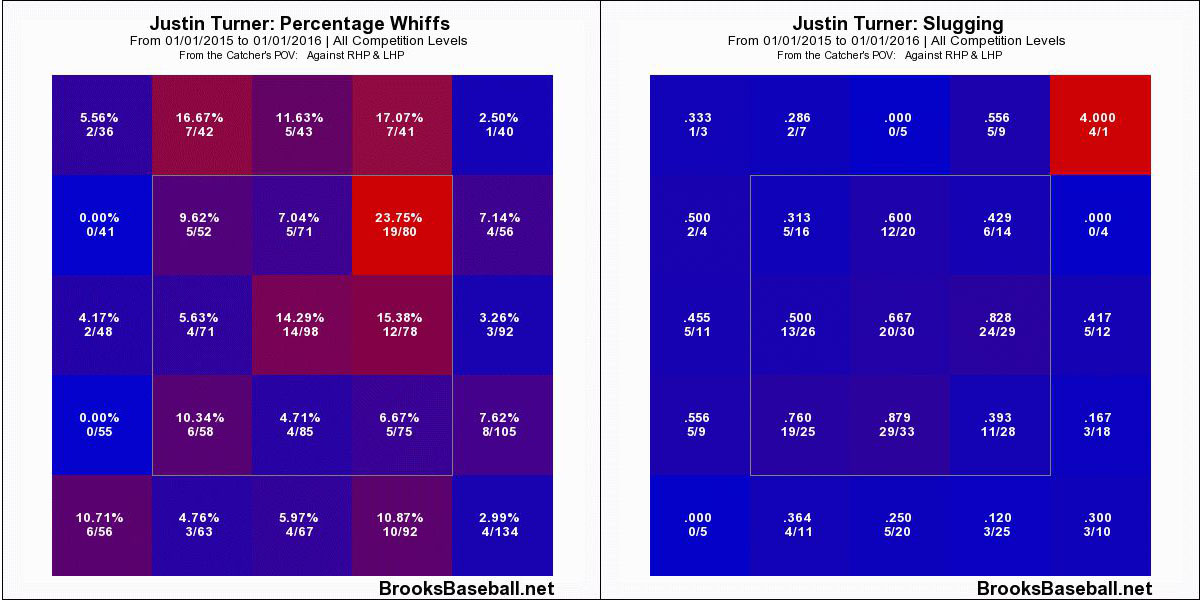 Turner’s whiffs have come mostly up in the zone or above it, and he’s hasn’t done a ton with those pitches. But he has fared very well against strikes down-and-in without swinging and missing too often in that vicinity.

Andre Ethier has always been an extreme splits guy. He’s awful against left-handed pitching but very good against right-handed pitching. He had the worst year of his career in 2014 but bounced back nicely this year with a .294/.366/.486 line in 445 plate appearances. His walk rate is just about average, and he’s another Dodgers hitter who kept his strikeout rate better than average. 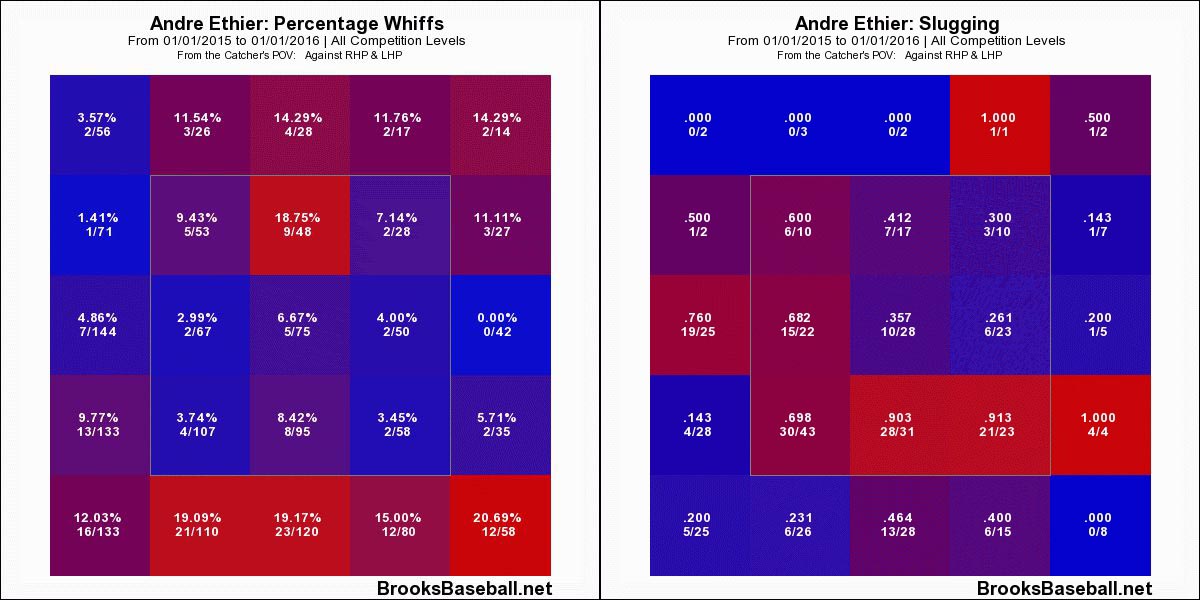 And it looks like keeping the ball below the zone—but not down in it—is a good, if risky, strategy for getting him out.

Enrique Hernandez has been a nice find for the Dodgers, as he’s hit very well in limited playing time. Drafted by the Astros in 2009, he was dealt to the Marlins in the deal that sent Jared Cosart to the Marlins and Jacob Marisnick to Houston. And last winter, he was part of the deal that sent Dee Gordon and Dan Haren to Miami and brought Andrew Heaney—who the Dodgers flipped for Howie Kendrick—and a couple other players to Los Angeles. 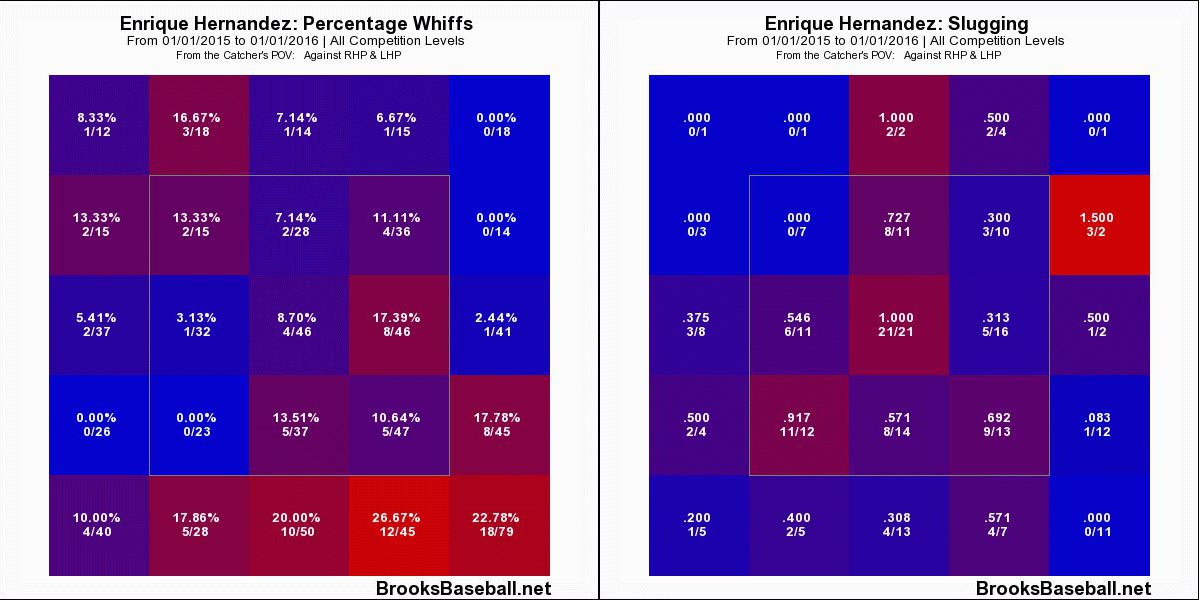 The whiffs have come low and away, and his power has primarily come against balls right down the middle of the plate and low and inside.

A well-known veteran, Adrian Gonzalez hasn’t replicated his 2009-2011 success in any single season since, but he’s still been a very good hitter. He hit .275/.350/.480 this year with 28 home runs, and his walk and strikeout rates were pretty similar to his career norms—both of which are good, especially for a hitter with power. And like most hitters, he’s fared much better against opposite-handed pitching, both this year and over the course of his career. 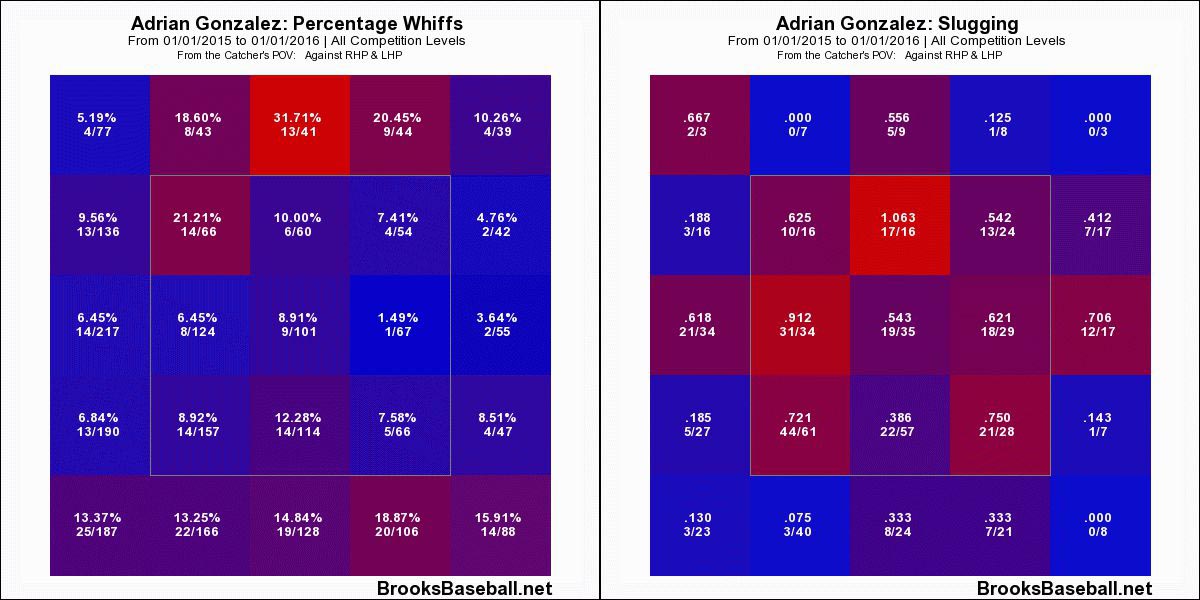 Gonzalez rarely whiffs at pitches anywhere in the strike zone, and he’s been able to produce power in almost any area of it.

A journeyman outfielder, Ruggiano is very much a part time player. He started the year with the Mariners, but since joining the Dodgers, he has raked. Overall, he’s hit .248/.333/.472 with six home runs and a 125 wRC+ this year, which is not bad. For his career he’s been good against lefties and below-average against righties. He draws walks at decent clip, but he strikes out a bunch—and did so 29.1 percent of the time he was at the plate this year. 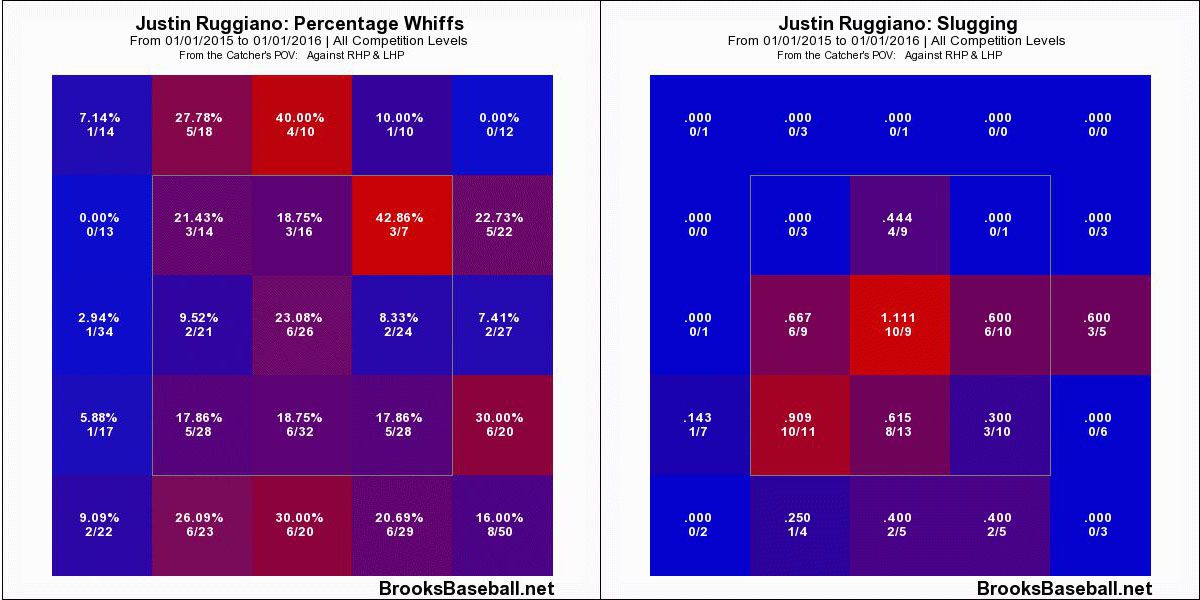 There have been plenty of places to get him to swing and miss this year. And he’s hit best against pitches where you’d expect a hitter to do so. Basically, keep the ball up and away against Ruggiano.

Typically Clayton Kershaw’s catcher, Ellis is expected to start against the Mets tonight in Game 1. He’s got significant splits this year and for his career, and it’s good for the Mets that he’ll be facing Jacob deGrom. For the season, he’s hit .238/.355/.403 with a 116 wRC+. He walks a lot. 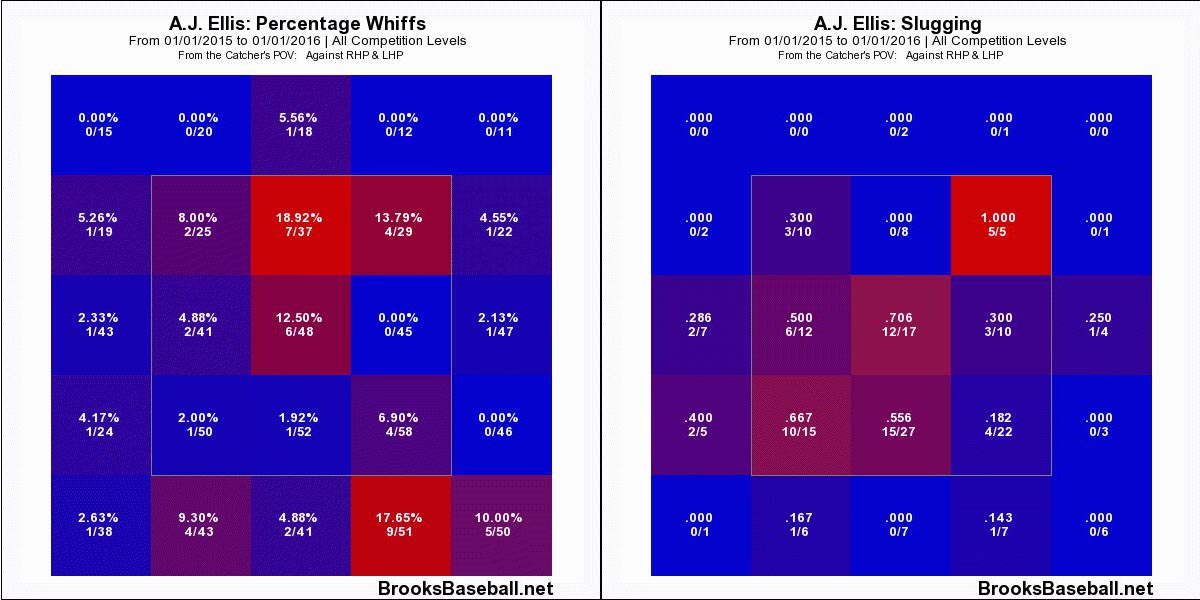 Keeping the ball up against Ellis seems like a good idea, and like Ruggiano, avoiding the low-and-in part of the strike zone would be preferable.

Acquired by Los Angeles in the Matt Kemp trade, Grandal has hit really well this year, though most of his success came early in the season. Overall, he has hit .234/.353/.403 with 16 home runs and a 115 wRC+. Like Ellis, he walks a ton. Unlike Ellis, he strikes a bit more than league average. A switch-hitter, he’s been better as a left-handed hitter both this year and for his career, but he’s been decent as a right-handed hitter, too.

Here are the whiff and slugging zone profiles for him as a left-handed hitter: 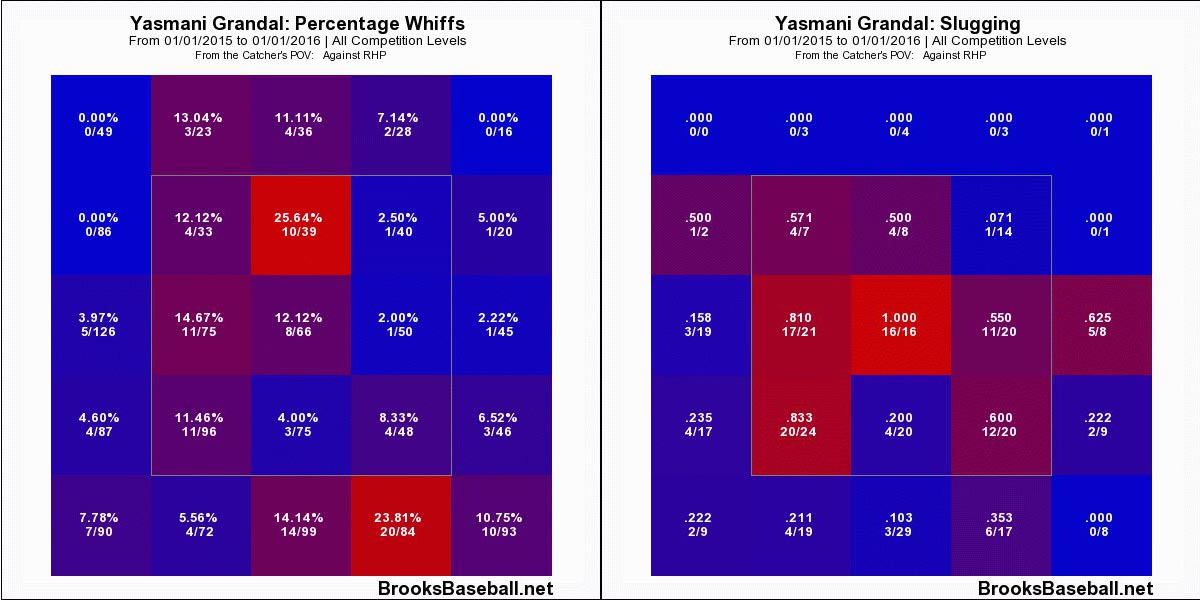 And as a right-handed hitter: 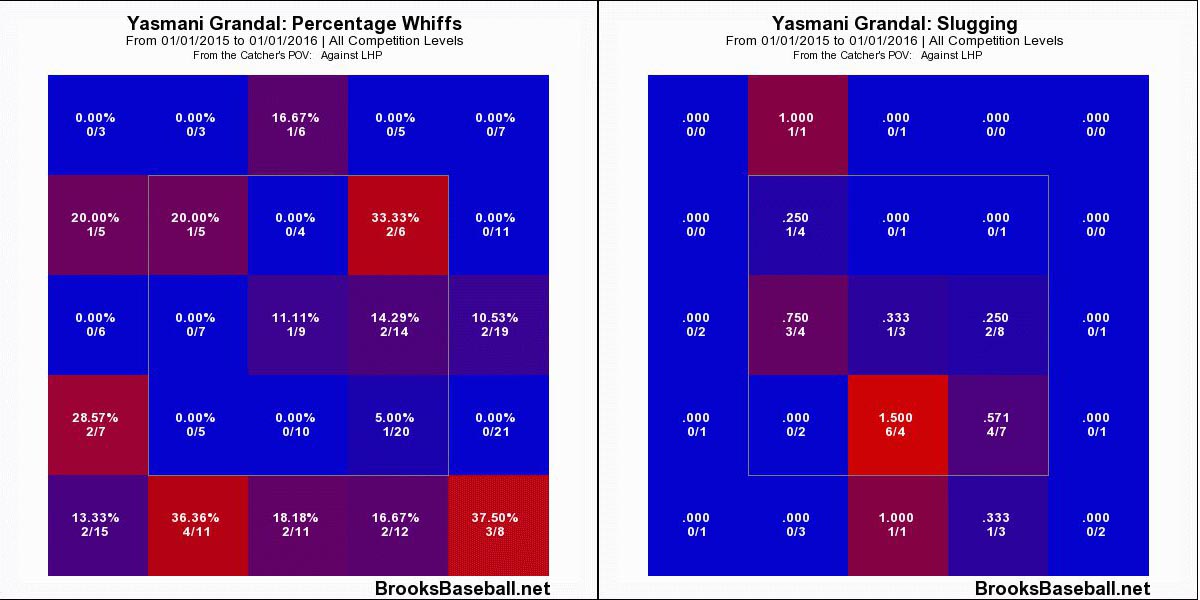 Keeping the ball away from him or below the strike zone to generate whiffs seems like a good idea on either side.

After getting off to a scorching hot start to his major league career, Pederson saw his numbers plummet over the course of the season. He still hit 26 home runs with a .210/.346/.417 line and a 115 wRC+, a pretty classic example of a hitter whose low batting average wasn’t really a problem. He walked a ton, but he struck out a ton, too. 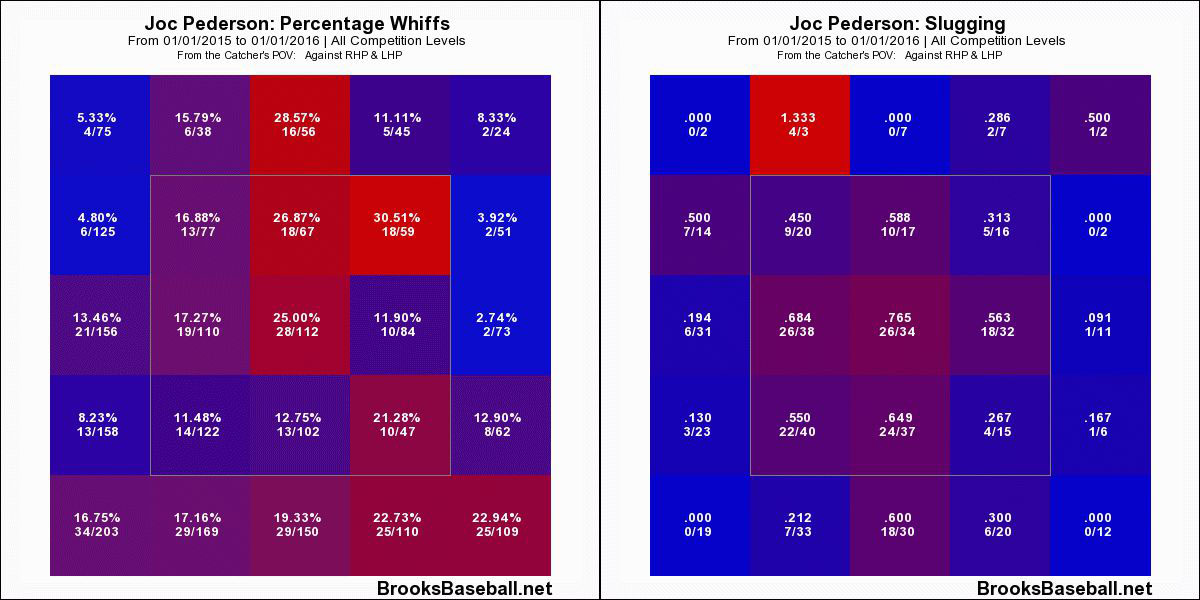 The whiffs have come on pitches very high in the zone and above it, as well as pitches below the zone. Avoiding the lower-third of the strike zone seems like a good idea. Pederson has hit for power in most areas of the strike zone.

It wasn’t a certainty that Puig would be on the NLDS roster, as he’s working his way back from a hamstring injury and hadn’t played since August 27 until he got into the Dodgers’ last two regular season games. He’s been banged up this year and has made just 311 plate appearances. And he hasn’t hit nearly as well as he had coming into this season, with a .255/.322/.436 line and 11 home runs. 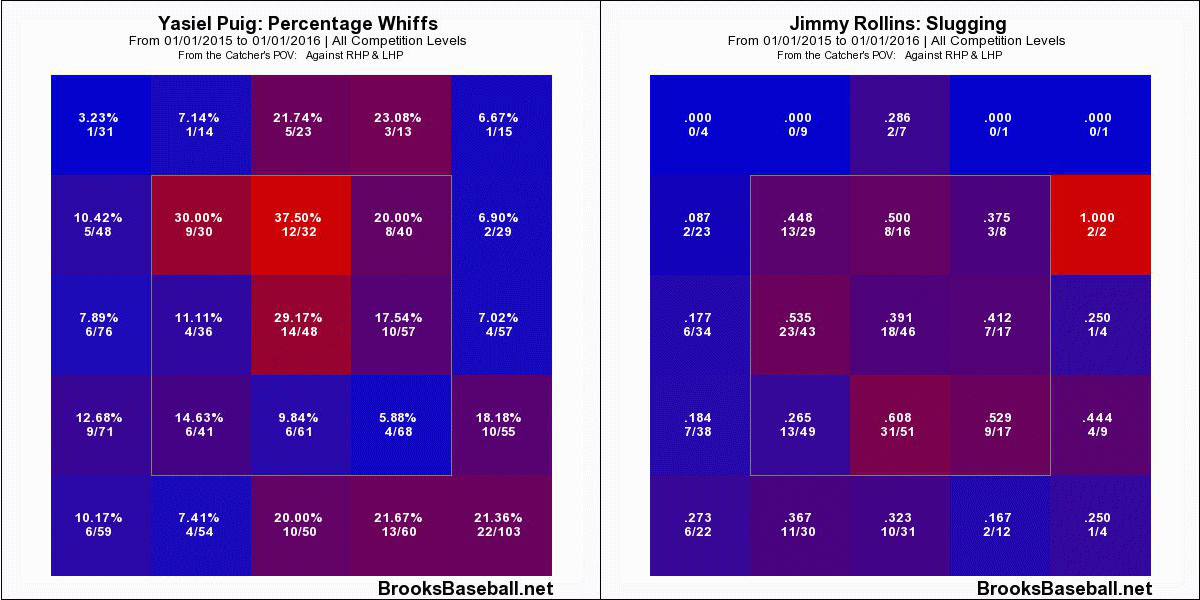 Howie Kendrick is basically a west coast, right-handed version of Daniel Murphy. With a 109 wRC+ this year and 108 wRC+ for his career, his single season numbers haven’t fallen in quite as small a range as Murphy’s have, but he’s a little bit better than league average as a hitter, and aside from his single best season in 2011, his performance hasn’t varied much over the years. He’s been better against lefties in his career and this season, and he’s been roughly a league-average hitter against righties. 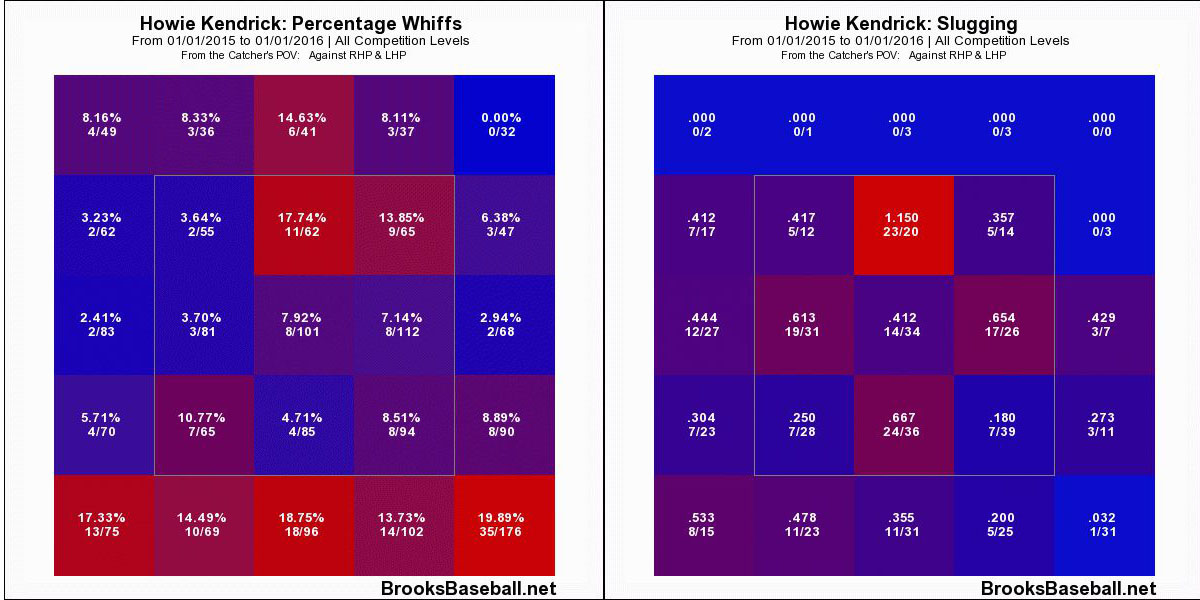 Kendrick has been vulnerable high and low pitches this year, and avoiding the middle and lower third of the zone with him seems ideal.

It’s been four years since Crawford had his awful season in his first year in Boston. In his second year there and his first two in Los Angeles, he was a decent hitter. But this year, he hit just .265/.304/.403 with a 95 wRC+. He’s never walked all that much, but his 21.2 percent strikeout rate this year is quite a bit higher than his career 14.9 percent rate. 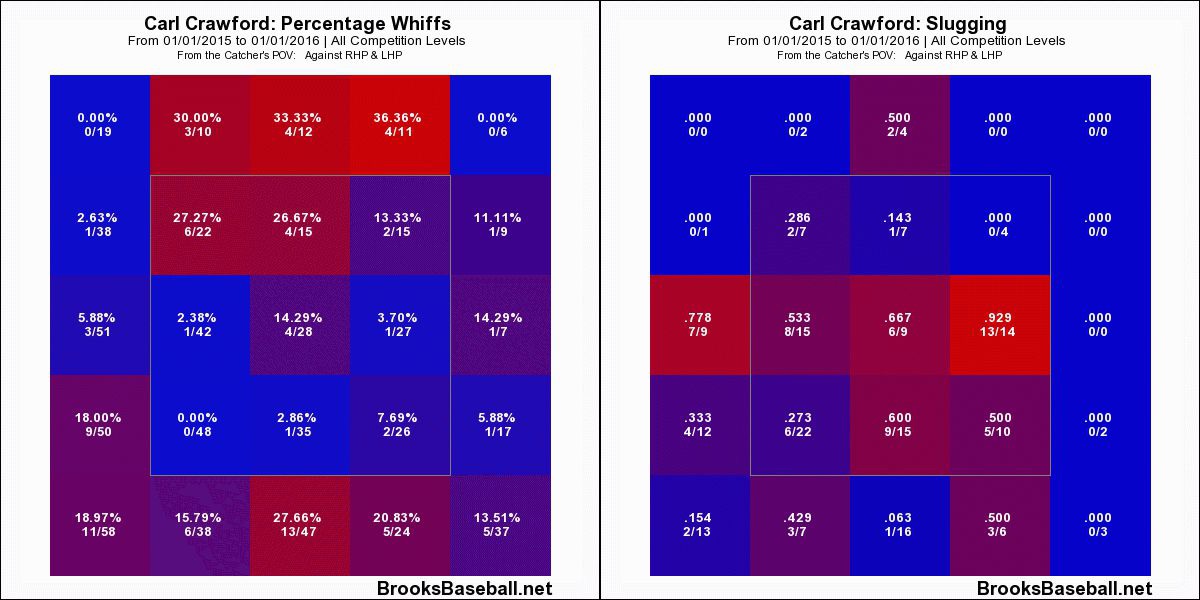 Like Kendrick, there are pretty clear-cut areas where Crawford has struggled and succeeded this season.

The 36-year-old Rollins spent his entire career with the Phillies until he was dealt to the Dodgers last December. He hasn’t hit well with Los Angeles, and it’s understandable that the team is going with Seager over him as the starting shortstop. Rollins has hit .224/.285/.358 with 13 home runs and an 80 wRC+ this year. He's a switch-hitter, but we'll just go with one overall heat map here. 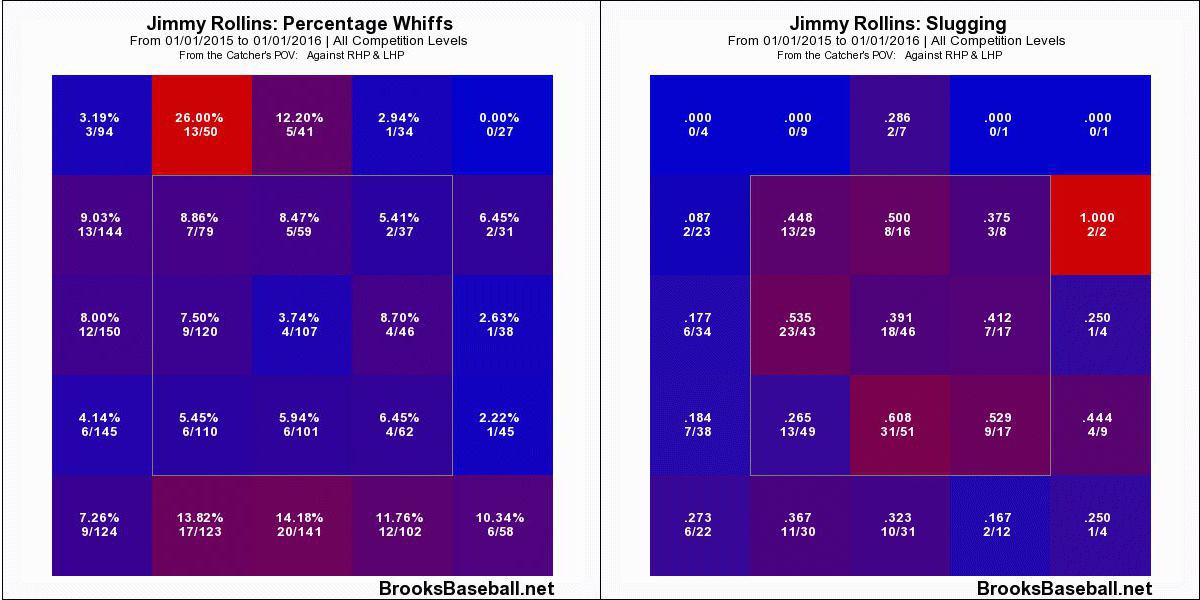 Yep, he’s here, too. And just like Rollins, he had been with the Phillies for his entire career until they traded him to Los Angeles—though he was dealt this August. He struggled before the trade. He has struggled since the trade. In total, he has a .212/.286/.343 line for the year with a 71 wRC+. That is not good. 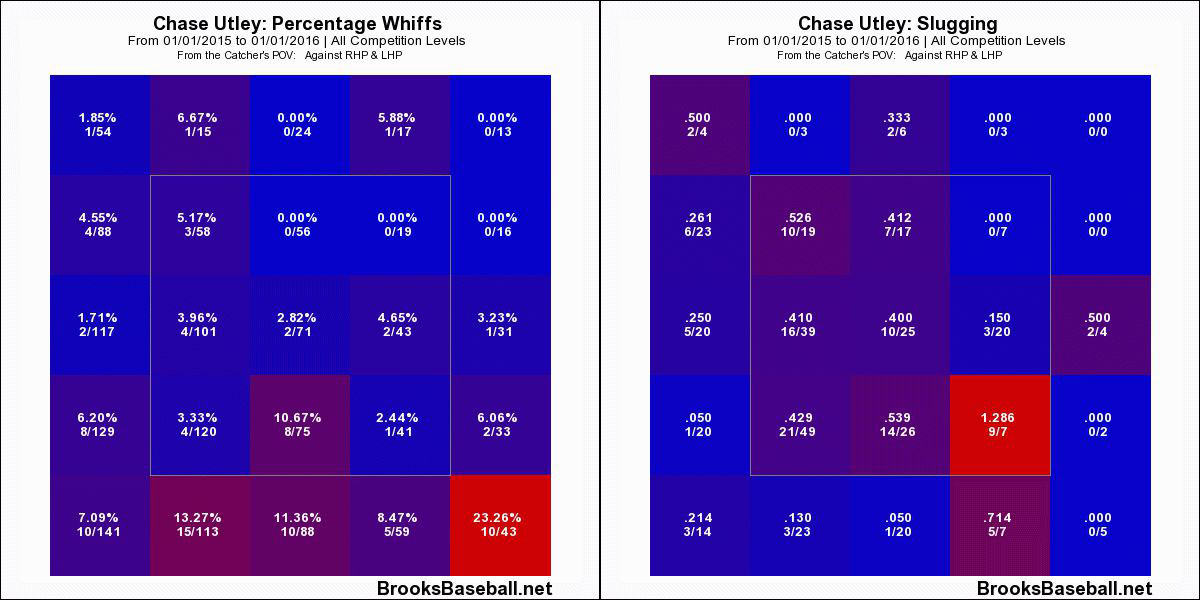 He still doesn’t strike out much, but just keep the ball out of his down-and-inside wheelhouse.