A few years removed from being one of the best relief pitchers in baseball, 31-year-old Joakim Soria spent his 2015 season with the Detroit Tigers and Pittsburgh Pirates. In total, he threw 67.2 innings and had a 2.53 ERA and 3.71 FIP, but he was a different pitcher before and after the trade that sent him to Pittsburgh, as he gave up a staggering 1.76 home runs per nine with Detroit and didn't give up any home runs with Pittsburgh.

Signed by the Los Angeles Dodgers as an amateur free agent on October 31, 2001, Soria was released three years later. The San Diego Padres signed him a year after that, and the Kansas City Royals took him from San Diego in the Rule 5 draft following the 2006 season. And Soria had no problem sticking on the major league roster—where, like all Rule 5 picks, he had to stay for a season in order for Kansas City to fully control him—in 2007, as he threw 69.0 innings with a 2.48 ERA and 2.50 FIP.

Soria was even better than that the following year, and through the first four years of his major league career, he had a 2.01 ERA and 2.76 FIP as a dominant high-strikeout, low-walk relief pitcher. In 2011, however, he struggled and finished the year with a 4.03 ERA and 3.49 FIP. He had Tommy John surgery in the spring of 2012 and missed that entire season before becoming a free agent when the season ended.

The Texas Rangers signed him shortly after that. He pitched 23.2 innings for them in 2013 with a 3.80 ERA and 3.68 FIP. His strikeout rate remained high, but he walked 5.3 batters per nine in that short span of time. He looked much more like his old self in 2014, and Texas traded him to the Tigers late in that season.

While there had been a slight decline in Soria's velocity over the years, he threw his hardest fastball in 2015. Here's the data from Brooks Baseball. 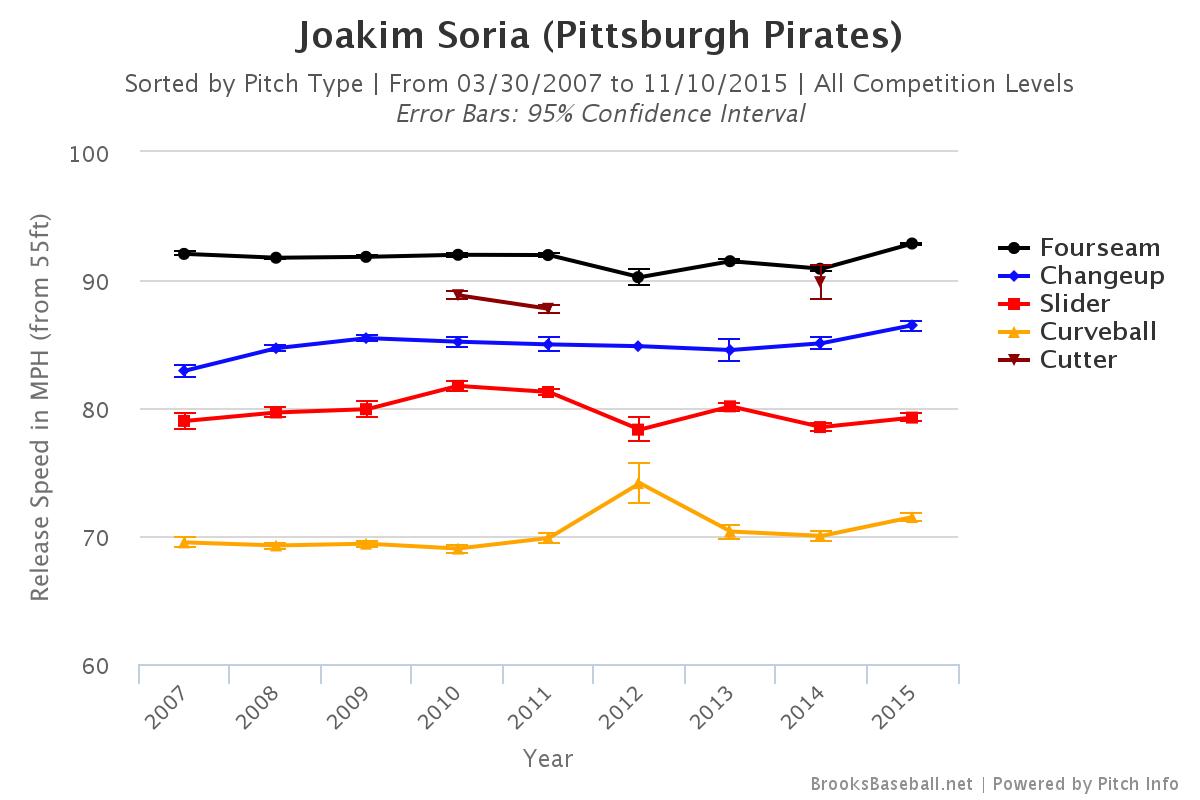 The crowd-sourced projections at Fangraphs predict Soria will get approximately a two-year deal at $7 million per season. That estimate seems like it might be a little on the low end, especially considering the lack of dominant relief pitchers on the market this winter.