Emerging from the fog

It's a time for healing.

Share All sharing options for: Emerging from the fog

When I was in my second-year graduate internship, a staff psychologist—an avowed behaviorist—broke it down for us during one of our weekly seminars. She explained, "one can conceptualize the root of all psychopathology as being some form of experiential avoidance." The basic idea there is that when people go out of their way to avoid thoughts, feelings, and experiences that they deem horrible, unacceptable, etc., they may experience undue suffering. It's sadly ironic: Avoiding pain is a healthy, adaptive response to dangerous stimuli, but if the threat is actually negligible or no longer exists and it still disrupts a person's life, then there's probably something to talk about. We all have irrational beliefs and fears, and while they are mostly innocuous, they can sometimes cause us real suffering.

Anyway, the psychologist's statement yielded one of those nifty "ah-ha!" moments for me. I had previously contemplated a rough version of the "experiential avoidance" notion in my own reflections, and I felt like I was on the brink of achieving a deeper understanding of an extremely potent and applicable paradigm. We proceeded into a fascinating discussion of various common mental illnesses—such as major depressive disorder and generalized anxiety disorder—through that theoretical lens. The idea had (and still has) its obvious limits, of course, but it wasn't presented to us as a cure-all or a magic bullet—it was simply another potentially useful means of helping our clients get where they wanted to go.

I have since turned away from the counseling profession, but the training I received stays with me. Among other things, I find myself thinking through my foibles and problems as Nate-the-therapist might. I find myself "checking in" with myself—"hey, what's this all about?"—as I steer my way, uncertainly at times, through the muddled weirdness of life.

And so it is that I've been poking and prodding at my near-total disengagement with all things baseball since the day after the World Series. People started talking about which teams should make which moves—hot stove fodder—within hours of the final out of Game 5. I observed these exchanges on Twitter for a few blank moments out of pure habit, feeling and thinking nothing.Then my better sense kicked in, and I logged the hell off. The horrible truth—the Mets lost the World Series, the season is over—was filling my mind like a balloon. How could I be expected to prognosticate about the 2016 season when I hadn't even processed the loss of this one?

The days passed, and players filed for free agency. Speculation burbled about certain players receiving qualifying offers, including a notable Murphish someone. An unexpected trade was completed! And, you know, I just couldn't give a damn about any of it. My apathy soon skidded sideways and downhill into an outright funk. "The offense is toast next year," I thought; even my hot takes were dripping in pathos.

At some fleeting point, I connected the dots and realized something was awry. I figured I was probably rapid-cycling through the various Kubler-Ross stages of grieving. I took solace in the knowledge that what I was going through, while unpleasant and more-than-slightly dramatic, was essentially a normative, if intense, response to being wounded by something I loved, a response for which I had pined and yearned and rooted very intensely. I was on the tail end of a vicious baseball bender, and I, prone to emotional extremes as I am, probably needed the detox this temporary aversion to baseball was affording me.

What I couldn't know is that, as satisfying as my new self-knowledge seemed, I hadn't quite broken through the shell of my resistance—not completely. No, it took the cold, relentless, and malfunctioning logic of Google Now to kick me through that final door. I will say this: In my opinion, Google Now is a nifty program. Its preternaturally intuitive and prescient notifications have proven very helpful to me on many occasions. I was caught off guard, then, when Google Now decided on Tuesday that it would pull a "Hal" and besiege me with this crap: 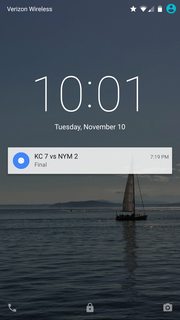 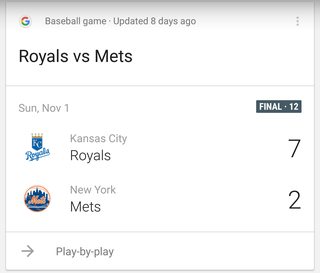 I'd scowl, curse, and dismiss the notification.Then, minutes later, it would reappear. This went on for hours. Google Now—Scumbag Google Now—was trolling me hard. It desperately needed me to see—just in case u forgot, bruh...u mad?—that the Mets had lost the World Series in Game 5, KC - 7, NYM - 2. Fffffffuuuuuuuuuuuu...

And then suddenly, in the very depths of my pissy little rage, it was over. It was gone—the apathy, the sadness, the detachment. It was gone. I checked Twitter: I could handle the #hottakes (sort of). I pondered Dilson Herrera starting at second base next year: cool! I thought about the hot stove season, the winter meetings, and the 2016 Mets; I could even think actual, semi-cogent thoughts about writing this article. A therapeutic breakthrough, just like that,in a snap.

I couldn't appreciate it until I started writing this, but Scumbag Google Now had done me a big favor, behavioral-psychology-style: It had helped me face the circumstance I had stubbornly deemed intolerable, and that was causing me all manner of undue, uncharacteristic aversion and weirdness and dysfunction. Scumbag Google Now helped me heal, and I am deeply grateful. I am ready to close the book on the 2015 season and look ahead to 2016.

I'll be keeping an eye on those notifications, though.