We kick off The Piazzas with the Best Rookie category. Jacob deGrom took home both the Piazza and the NL Rookie of the Year Award in 2014, while Juan Lagares took home the Piazza in 2013. This year's top two contenders look to have bright, cost-controlled futures ahead of them.

Remember that postseason performance was also considered in the voting. The nominees for Best Rookie are:

Michael Conforto: The 2014 first-round pick was called up from Double-A Binghamton in late July, following a maddening stretch of ineptitude by the Mets' lineup. He exceeded most everyone's expectations, posting an .841 OPS while hitting nine home runs and 14 doubles in just 194 plate appearances. Conforto was a big part of the Mets' second-half success. He also impressed defensively, both with his range and his throwing arm. His two home runs in game four of the World Series were tremendous, no matter what happened late in that game.

Sean Gilmartin: Not much was expected from Rule 5 pick Gilmartin, but he turned out to be probably the Mets' second-best reliever during the regular season. His 3.00 K/BB ratio was strong, and he allowed just two home runs in 57.1 innings pitched. He even started a game, during the last week of the last week of the season, allowing two runs over five innings in a Mets loss. The southpaw Gilmartin actually fared better against righties than lefties in 2015, but he should be back in the bullpen in 2016 regardless.

Erik Goeddel: Goeddel was a pleasant surprise out of the bullpen, striking out 34 in 33.1 innings pitched with a 2.43 ERA. He missed almost three months of the season with an elbow injury, but made it back for September. Goeddel's postseason was brief and forgettable; he allowed three runs without recording an out in game three of the NLDS. He wasn't often used in high-leverage situations in 2015, and probably won't be in 2016 either, but he has a great shot at making the team next season.

Kevin Plawecki: It wasn't a dream rookie season for Plawecki, whose triple-slash line was .219/.280/.296 in 258 plate appearances. He filled in when Travis d'Arnaud went down with injury and did not distinguish himself offensively or defensively. Plawecki is still just 24 years old and dominated at Double-A Binghamton in 2014, though, so there's hope he can rebound. He's better than Anthony Recker, at least.

Noah Syndergaard: THOR! Big Noah received his much-anticipated call-up in early May, and started mowing down batters right from the get-go. He struck out 166 and walked just 31 in 150 regular-season innings pitched, en route to a 3.24 ERA. He struck out at least ten batters five times, and hit 13 Ks in a July game against the Diamondbacks. His mammoth home run in a game in May was a season highlight. Big Noah was terrific in the postseason, both as a starter and reliever. He finished fourth in NL Rookie of the Year voting, behind Kris Bryant,  Matt Duffy, and Jung-ho Kang. I bet it won't be the last time his name shows up in awards voting.

Logan Verrett: Verrett was selected from the Mets by the Orioles in the 2014 Rule 5 draft, and latched on with the Texas Rangers before the 2015 season. He made four uninspiring appearances for the Rangers before being DFA'd, and was returned to the Mets organization in May. Verrett appeared in 14 games for the Mets, including four starts, pitching to a solid 3.03 ERA. The highlight of his season was a start in August against the Rockies, during which he allowed just one run in eight innings, striking out eight batters. It also allowed the Mets to rest their stop starting pitchers in advance of the playoffs. Thank you, Logan!

And the Piazza for Best Rookie, in a unanimous vote, goes to... 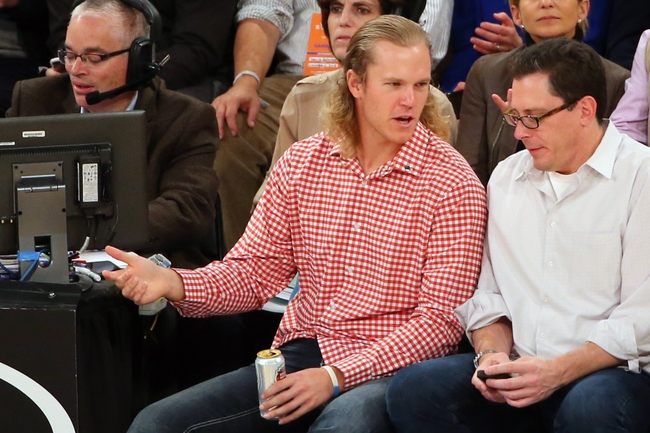