Remember that postseason performance was also considered in the voting. The nominees for Best Relief Pitcher are:

Tyler Clippard: The longtime Nats reliever came over from the A's just before the July trade deadline. He got plenty of work during his two regular season months in Flushing, appearing in 32 games and pitching to a respectable 3.06 ERA. However, he did have a bit of a home run problem, allowing five longballs in 32.1 innings pitched. No surprise there; he's an extreme fly-ball pitcher. Clippard struggled in the postseason, allowing five runs in 6.2 innings pitched, tarnishing his resumé for this vote.

Jeurys Familia: Familia looked downright unhittable during long stretches of 2015, his second-straight fantastic season. He did it all -- tons of strikeouts and groundballs, few walks, and a bullpen-leading 78 innings pitched. On top of it, his entrance to Danza Kuduro is one of the most electric moments in all of sport. He was so dominant all season that I hate to bring up the devastating game-tying home run he surrendered to Alex Gordon in game one of the World Series. There might have been a drastically different outcome to the series if that didn't happen. Still, I'm happy he'll be on the Mets for years to come.

Sean Gilmartin: Gilmartin came in third place in the Best Rookie voting, and deservedly so. His 2.67 ERA in 57.1 innings pitched was supported by his peripherals, and he allowed just two home runs all season. He should have a home in the bullpen next season.

Erik Goeddel: Goeddel also received some down-ballot consideration for Best Rookie. He was effective in the 33.1 mostly low-leverage innings he pitched in 2015, tallying about a strikeout per inning. Let's just try to forget his disastrous appearance in the NLDS.

Addison Reed: The righty with a name straight out of Bushwood Country Club was acquired from the Diamondbacks just before the August trade deadline. In 15.2 regular season innings pitched with the Mets, he posted terrific strikeout, walk, and ground-ball rates, leading to a 1.17 ERA. Reed was a nice acquisition by Sandy Alderson and didn't cost much. He was useful in the postseason until game five of the World Series, during which he got torched in that unfortunate 12th inning. Reed should be back in 2015, despite a hefty-for-the-Mets price tag of about $5.8 million.

Hansel Robles: Robles was called up from Triple-A Las Vegas in April, following Jerry Blevins's injury. He was a pleasant surprise out of the 'pen, quick-pitching his way to a 3.67 ERA over 54 innings pitched. He racked up 61 strikeouts and improved as the season went on. Robles threw three perfect innings in the playoffs, including two in the World Series. We'll see him again in 2016.

And the Piazza for Best Relief Pitcher, in a unanimous vote, goes to...

Jeurys Familia! That's two years in a row now for Jeurys. His teammates mobbed him after the voting results were announced. 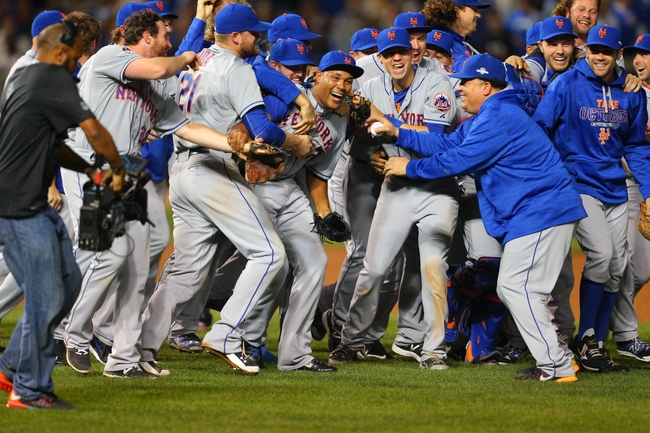