The Piazza for the Mets' worst starting pitcher of 2015 goes to...

Here is a recap of The Piazzas so far:

Today we award the Piazza for Worst Starting Pitcher. Mets starting pitching was among the best in the league this season, and there's really only one pitcher who deserves votes in this category. We'll go through with the voting for the sake of completeness.

Remember that postseason performance was also considered in the voting. The nominees for Worst Starting Pitcher are:

Bartolo Colon: Colon shut down the Nationals on Opening Day, a sign of the Mets' season to come. He continued to pitch well in that first month, but struggled from May through late August. The big guy had an unsightly 4.90 ERA heading into his start against the Phillies on August 26, just before pitching to a 1.99 ERA over his final 49.2 innings of the season. He didn't start any games in the postseason but was effective as a reliever in seven appearances. Colon (likely) finishes his two-year Mets tenure with an ERA+ of 86 over 397 innings pitched. That's solidly below-average, but he did eat plenty of innings. All-around entertainment value gives him a bump, though, and he'll be fondly remembered by Mets fans.

Dillon Gee: It wasn't a fun season for Gee or Mets fans who watched him pitch. He made the starting rotation out of spring training, and was so-so in April. He landed on the DL in May with a strained groin, paving the way for Noah Syndergaard to be called up. Gee returned in June and was a disaster in three appearances, two of them starts. He was designated for assignment in June after his ERA ballooned to 5.90, but ended up staying with the Mets organization. He made 14 starts at Triple-A Vegas and elected free agency at season's end. If your team's worst starting pitcher only logged 39.2 innings pitched, it was probably a good season. Gee was better than expected for a 21st-round draft pick, but that's setting the bar low.

Jon Niese: Niese's peripherals took a dive in 2015, as his strikeout, walk, and home run rates all worsened from 2014. Still, he was useful for much of the season before fading in August and September, ultimately finishing with a 4.13 ERA in 176.2 innings. Niese also didn't smile once all season, continuing an impressive streak dating back to his rookie year.

Logan Verrett: Verrett pitched 22.1 innings over four starts with the Mets, good for a respectable 3.63 ERA. His eight-inning, one-run gem against the Rockies in August was the highlight of his season. That start provided Matt Harvey some extra rest, perhaps giving Harv that extra boost he needed in the playoffs. So hat tip to you, Logan!

And the Piazza for Worst Starting Pitcher, in a unanimous vote, goes to...

Dillon Gee! Dillon used the occasion to ponder his past successes and setbacks with the Mets, as well as his uncertain future. 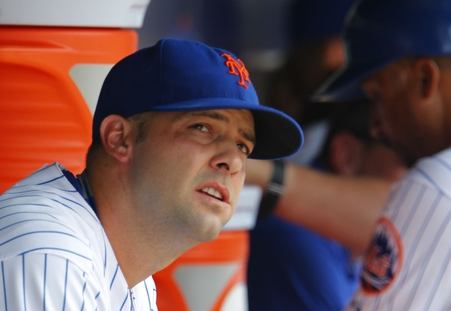