The Piazza for the Mets' best starting pitcher of 2015 goes to...

Yesterday, we awarded the Piazza for Worst Starting Pitcher to Dillon Gee. Today, we turn to a positive award: Best Starting Pitcher. Matt Harvey won this Piazza in 2013, and Jacob deGrom took it home in 2014. I think someone will be a two-time winner after this vote. There should be fierce competition for this Piazza in future years. Grab some popcorn.

Remember that postseason performance was also considered in the voting. The nominees for Best Starting Pitcher are:

Jacob deGrom: There was no sophomore slump for deGrom, who actually improved upon his 2014 Rookie of the Year campaign. His 2.54 ERA and 205 strikeouts were tops in the rotation. And he didn't slow down in the playoffs, posting a 2.88 ERA in 25 innings over four starts, including a 13-strikeout masterpiece in game one of the NLDS. deGrom deservedly picked up a handful of down-ballot Cy Young Award votes and should pick up plenty of first-place votes for this Piazza.

Matt Harvey: Harvey kept it interesting all season, both on and off the field. He exceeded most Mets fans' expectations with a 2.71 ERA in 189.1 innings pitched, looking almost as strong as he did before Tommy John Surgery. He capped it off with some stellar postseason work, keeping each of the Dodgers, Cubs, and Royals in check over four starts. His start in game five of the World Series might have been remembered as an all-time classic had the ninth inning gone differently. Harvey is one of the biggest divas in MLB but it's tolerable when he performs like he did in 2015.

Noah Syndergaard: Big Noah already won the Piazza for Best Rookie and he should finish in the top three for Best Starting Pitcher. He throws harder than anyone in the Mets rotation, which is really saying something, and had the best strikeout percentage in the group. I bet he's even better in 2015. Thank you R.A. Dickey and Sandy Alderson for bringing Big Noah to Flushing.

And the Piazza for Best Starting Pitcher, in a unanimous vote, goes to... 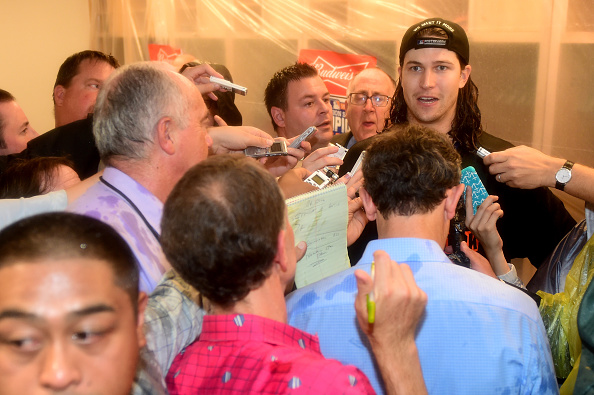