The Piazza for the Mets' worst position player of 2015 goes to...

Unlike the Piazza for Best Starting Pitcher awarded to Jacob deGrom yesterday, there is a credible case for several players to take home the Piazza for Worst Position Player. This category always generates lively discussion. Past winners were Chris Young in 2014 and Ruben Tejada in 2013.

Remember that postseason performance was also considered in the voting. The nominees for Worst Position Player are:

Eric Campbell: Campbell played entirely too many games for the Mets in the first half of the season, following David Wright's April injury. He even batted cleanup a couple times. Once Kelly Johnson and Juan Uribe arrived at the trade deadline, he was made redundant. The final damage was a .197/.312/.295 slash line over 206 plate appearances, with poor defense.

Darrell Ceciliani: Longtime Mets farmhand Ceciliani was called up in May when Kirk Nieuwenhuis was temporarily released. He went on a brief hot streak in June but overall did not impress at the plate. In 75 plate appearances, his OPS was .550. He did look good defensively in the outfield, though. Ceciliani was sent back to Triple-A Vegas in early July, where he raked for the rest of the summer (but who doesn't there?).

Michael Cuddyer: The only nominee to play in the postseason, Cuddyer was a tremendous disappointment after signing a two-year, $21 million deal last offseason. After batting .331 during 2013-2014 with the Rockies, his average plummeted to .259 in 2015. His power also dissipated. It was painful watching him the playoffs, as he went 1-for-11 with seven strikeouts. Cuddyer had surgery after the season to repair a core muscle injury, so perhaps that explained his struggles. Still, it wasn't an encouraging season and Michael Conforto's emergence means Cuddyer's playing time should be reduced in 2016.

John Mayberry: Mayberry was signed last offseason to mash lefties, much like Chris Young two offseasons ago. Unfortunately, Mayberry's time with the Mets was arguably even worse than Young's. Mayberry homered in his first start with the Mets but it was all downhill from there. He posted just a .628 OPS against lefties, and a .545 OPS overall. The Mets cut him loose in late July after an extended 0-fer stretch. At least he only cost $1.5 million.

Danny Muno: I have no recollection of Muno playing for the Mets this season but Baseball-Reference doesn't lie. The infielder made 32 plate appearances sprinkled throughout the season and struck out in 11 of them. He finished with a .443 OPS. There are better choices for this Piazza.

Anthony Recker: The longest-tenured Met to be nominated, Recker was terrible in 2015 after at least providing some power from 2013-2014. In 92 plate appearances this season, his triple slash line was .125/.239/.213. Kevin Plawecki cut into his playing time, and he was superfluous when Travis d'Arnaud was healthy. The Mets removed Recker and his rotund behind from the 40-man roster after the World Series. He is a catcher, though, so he was able to find a minor-league job with the Indians, who also invited him to spring training.

And the Piazza for Worst Position Player goes to...

John Mayberry! Here's John showing us what it takes to win this award. 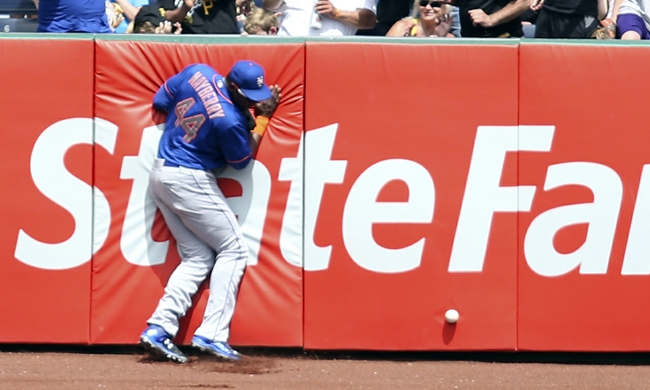