Now officially a Gold Glove winner, Lagares looks to stay on the field and continue to improve at the plate, all while providing spectacular center field defense in 2015.

One of the larger questions heading into 2014 revolved around Juan Lagares's surprising emergence the previous season and whether he was for real as the Mets' center fielder. A year later, the questions about Lagares have mostly been erased, as he proved that his defensive capabilities were real. Lagares's 2014 season culminated in some gold hardware for his mantle, and he managed to pair that Gold Glove defense with an improved offensive game at the plate. In sum, he was worth 5.5 wins above replacement in just 116 games according to Baseball-Reference.

Looking ahead to 2015, most of the concern about Lagares tends to focus on his durability, which was his biggest shortcoming in 2014. Hamstring and rib cage injuries sent Lagares to the disabled list in May and June, and his season ended early due to a hyper-extended elbow suffered on a throw from the outfield in mid-September. 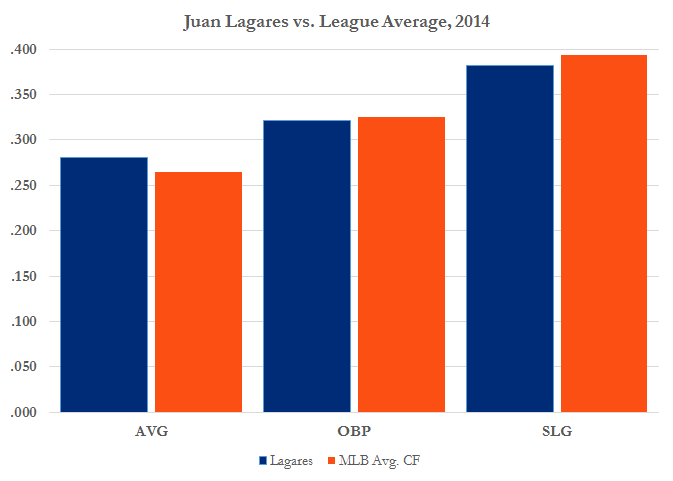 If Lagares can stay off the disabled list this season, Mets fans will again get to enjoy the center fielder's eye-popping defensive abilities, and ideally they'll be able to continue to watch him develop his offensive game, as well. After hitting just .242/.281/.352 as a rookie, Lagares took some measurable steps forward at the plate last year, hitting .281/.321/.382 in 2014. He cut down his strikeout rate by nearly four percentage points, while his batting average on balls in play ticked up to .341 thanks to a much-improved 21.9 percent line drive rate. Lagares's walk rate was essentially static, and that's an area where you'd like to see some modicum of improvement. One positive development was that, at Terry Collins's behest, Lagares began to utilize his speed on the bases, tallying 13 steals in 17 attempts.

Even if he merely duplicates his 2014 line, Lagares is an immensely valuable player thanks to his defense. Terry Collins has the center fielder penciled in as the team's leadoff hitter to begin 2015, which means any gains made in the on-base or stolen base departments would be huge for the team. Of course, it's the stellar defense that should continue to be Lagares's calling card this season and going forward.