After Ike Davis was traded to the Pirates in April, Lucas Duda made the Mets front office look great with a breakout 30 home run season. Can the big guy repeat or even improve a bit in 2015?

An offseason of swirling rumors a year ago led the Mets to an ultimately uncomfortable situation with both Lucas Duda and Ike Davis on the roster, set to split time at first base early in 2014. Duda, the team's admitted top choice to man the position, saw the majority of the starts early on up until Davis was moved to the Pirates in the middle of April. Once the chaos of the platoon scenario went away, Duda stepped up and took the Mets' first base job as his own. Entering the 2015 season, Lucas Duda now looks to build on an excellent year as the Mets' starting first baseman.

With the job in his grasp, Duda certainly didn't disappoint. He hit .253/.349/.481 with 30 home runs and 27 doubles in his 596 plate appearances. The 30 home runs were the 11th highest total in MLB in 2014 and 4th among first baseman, trailing only White Sox rookie Jose Abreu, Toronto's Edwin Encarnacion, and the Cubs' Anthony Rizzo. Duda coupled his production at the plate with perfectly average or better defense at first base, totaling +0.4 via Ultimate Zone Rating and +5 by Defensive Runs Saved's measure. Either way, his work at first base was clearly much stronger than his adventures in left field and in total, Duda was worth 3.7 wins above replacement according to Baseball-Reference. 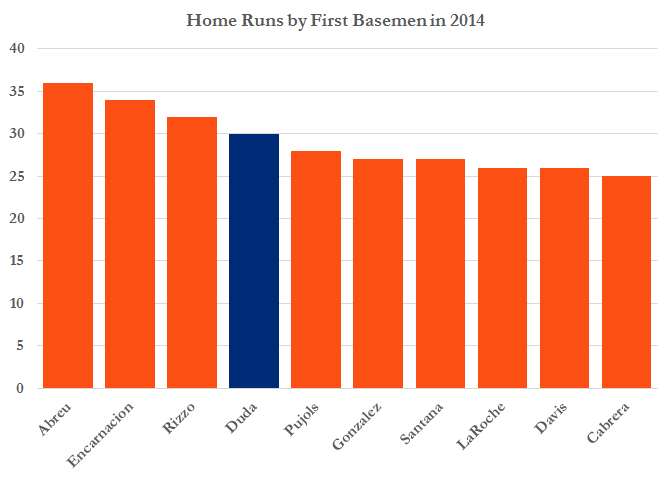 What can Duda do in 2015 to improve? While a repeat of his 2014 season would certainly suffice for the Mets, cutting down a bit more on the strikeouts would likely help him push his batting average and on base percentage up to more superficially appealing levels. As it is, Duda improved his strikeout rate by 4% from 2013, a large gain in and of itself, but outside of his excellent 2011 when he struck out at just an outlier 16.4% rate, Duda has never lived below the 20% range.

Heading into 2015, the Mets are expecting Duda to provide a big power bat in the middle of their lineup. Given what he did at the dish during his breakout last year, it should be fun to watch the big dude continue to launch baseballs deep into the Citi Field night (not to mention give his often concise, #unconfident interviews, which we all love to watch!).