A two-time member of the 40-home run club, Curtis Granderson looks to bounce back from a subpar debut in Queens.

When the Mets inked Curtis Granderson to a four-year, $60 million deal in December 2013, the club understood that they would not be getting the slugger who belted 84 home runs as a member of the Yankees in 2011 and 2012. However, the Mets were certainly expecting more from the club's first major free agent acquisition since the Jason Bay signing.

After missing over 100 games in 2013 due to injuries, Granderson appeared in 155 in 2014, batting .227/.336/.388 with 20 home runs and 66 RBI. While the final numbers were not pretty, they are somewhat skewed by two horrific stretches during the season. Granderson opened the year with just four hits in 32 at-bats (.125), which precipitated a month-long swoon that featured just one home run and one multiple-hit game. Overall, he hit just .136/.252/.216 in March and April, bringing the boo-birds out in Queens. 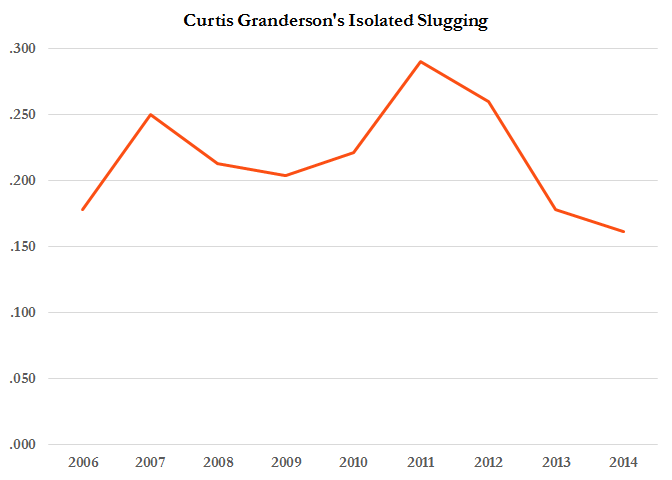 Granderson's numbers would spike to productive levels through much of May and June before leveling off in July. However, a .147/.231/.183 line in August—almost as bad as his opening month—conspired to keep Granderson's final numbers from respectability, despite a strong finish to the year.

A case can easily be made that two poor month's worth of at-bats completely sabotaged Granderson from having a strong season. As with any player, luck can have an enormous impact, and Granderson was certainly no exception. Unfortunately for him, much of his luck was of the negative variety. Even during his most productive months, Granderson managed just a .289 BABIP and a deeper look into his numbers shows they were fairly consistent with the rest of his career.

Looking ahead, the Mets should expect a bounce-back year from Granderson, with the caveat that Father Time will begin chipping away at his overall effectiveness. Power hitters rarely age well, and although New York has once again altered the dimensions at Citi Field, expecting anything more than 25 home runs from Granderson is asking a lot. The best the Mets can hope for is a similar year from their outfielder in the power department with the added benefit of better luck and run production from the middle of the order.