Carlos Torres became another overused Mets bullpen arm, yet he handled it quite well. Can he put together another solid season?

For the first two months of the 2014 season, the Mets' bullpen was in flux. Old, washed up veterans performed so badly that they were released before June. Through the turmoil, Carlos Torres provided stability. The 32-year-old righty became Terry Collins favorite, amassing 72 relief appearances (and one start), among the most in baseball among pitchers. He became the designated long man in the bullpen, yet made most of his appearances in the seventh inning and later. Despite his heavy usage, Torres performed fairly well, posting a 3.06 ERA and 3.86 FIP to go along with a rock solid 8.9 strikeouts per nine rate in a whopping 97 innings pitched.

Torres induced ground balls 46.8% of the time, an impressive rate for a guy who doesn't have stellar velocity on his fastball. His .302 BABIP against was consistent with his career norms, suggesting the dip in BABIP to .266 in 2013 was an aberration. Despite this, he managed contact well enough to not allow too many runs. Although it is an unreliable, often-fluctuating stat, his LOB% was 82, a number that put him in the top 35 among relievers. His performance garnered a -0.3 fWAR total, a stat that is notoriously biased against Mets pitchers. All in all, Torres held his own in 2014. 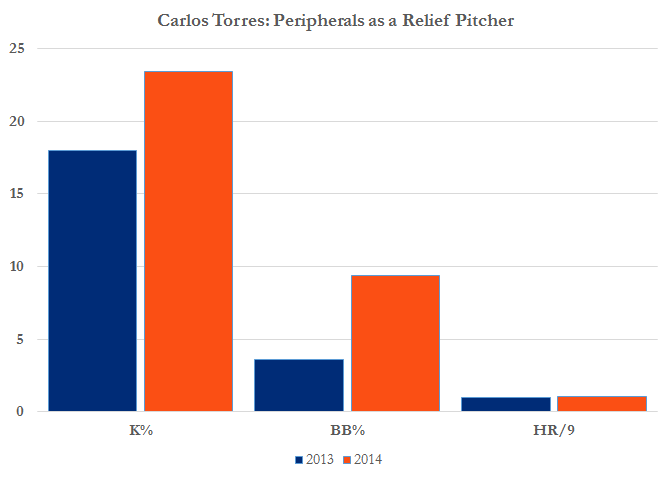 Similar production can be expected of the California native this year. The difference between his ERA and FIP in 2014 suggests that he got a bit lucky, but Torres's ability to miss bats should remain constant. One aspect in which he needs to improve, though, is his walk rate. He walked 3.53 batters per nine innings in 2014, and he'd be better of if he came closer to his 2013 rate of 1.77. The one remaining question is his longevity. As seen in Mets history, it's unrealistic to expect a 32-year-old to pitch over 90 innings in consecutive seasons without repercussion, so Terry Collins will need to monitor his workload.

Heading into 2015, Torres is the one guy in the bullpen that is never mentioned. Due to the presence of young, power arms in the Mets' bullpen, Torres doesn't get much attention. But he'll be a key player, especially if he continues to rack up innings like he did last year. As long as his arm doesn't fall off by mid-season, Torres should serve as a solid, flexible guy in the bullpen.