The reigning National League Rookie of the Year now carries the burden of expectations after bursting onto the big league scene in 2014.

When Jacob deGrom reached the major leagues for the first time last May, the plan was for him to pitch in relief, essentially replacing the demoted Gonzalez Germen. However, a Dillon Gee pulled muscle that turned into a month-long stint on the disabled list opened the door for deGrom to enter the rotation. Not only did the 26-year-old take the opportunity and run with it, he pitched himself into national consciousness by earning National League Rookie of the Year honors for the Mets, the first player to do so since Dwight Gooden thirty years earlier.

Converted from a shortstop to a pitcher during his time at Stetson University, New York selected deGrom in the ninth round (272nd overall) of the 2010 draft. Less than four years later, the lanky right-hander put together one of the finest rookie seasons by a pitcher in club history. He enjoyed a strong major league debut against the Yankees on May 15, surrendering just one run over seven innings in a 1-0 loss. Although he would struggle in his ensuing six starts (5.03 ERA), deGrom pitched well against the Marlins on June 21 and never looked back. Over his final 16 starts, he sported a 1.99 ERA and 1.96 FIP, and he struck out over a batter per inning while walking just 2.27 per nine. His final numbers included a 2.69 ERA (78 ERA- and 76 FIP-) and 144 strikeouts in 140.1 innings. In addition, the opposition hit just .228/.288/.326 against deGrom, who carved out a strong—yet not ridiculously low—BABIP of .297. He also proved he hadn't lost his touch with the stick as he proved to be the best hitting pitcher on the team, compiling a .217 batting average. 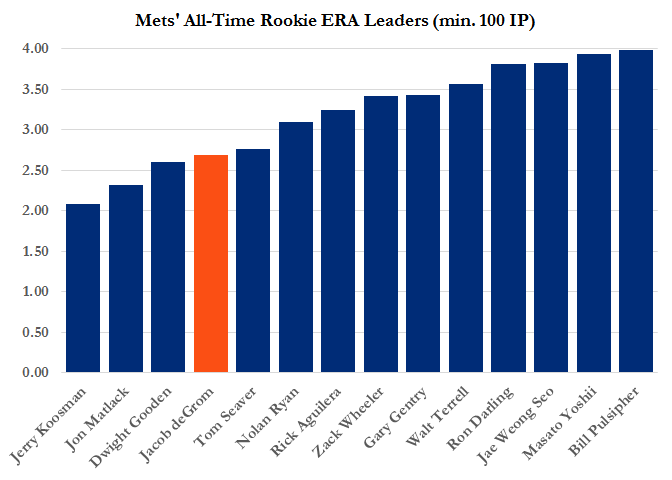 Although deGrom never got the sort of attention that Matt Harvey and Zack Wheeler did as prospects, he has positioned himself as a fixture in New York's rotation in 2015 and beyond. Already a fan-favorite thanks to his performance, deGrom's flowing brown hair has vaulted him into poster-boy status among Mets fans and the club, who have been quick to use his mane on t-shirts and in social media campaigns.

Unfortunately, maintaining that coiffure will be much easier than duplicating the success he enjoyed in 2014. deGrom will have sky-high expectations heaped on him from the get-go, most of which will be unfair due to a rookie season that will be almost impossible to top. However, deGrom has shown he can not only succeed against major league hitters but dominate them. Although things may not come as easily in 2015, there is every reason to be confident that deGrom will be a successful major league pitcher.