Jeurys Familia is a major reason the Mets' bullpen could be their best in years.

Like many relievers before him, Jeurys Familia began his baseball life as a starting pitcher. Upon completing a breakout 2011 season that saw him post an ERA under three while striking out almost 10 batters per nine innings across two minor league levels, Familia found himself on multiple top-100 prospect lists. But as he reached Triple-A, Familia's control betrayed him, eventually leading to a full time move to the bullpen in 2013. After struggling miserably in two cups of coffee with the big league club, fans were right to be wary, but Familia's terrific 2014 season did more than enough to extinguish those fears.

Over 77.1 innings, the right-handed Dominican compiled a 2.21 ERA, striking out 8.5 and walking 3.7 per nine innings, while generating a fantastic 57.4 percent ground ball rate. He brought a consistent reliability to the eighth inning. Although Jacob deGrom rightfully got the most press for his marvelous rookie season, Familia ended up tied—with teammate Travis d'Arnaud—for seventh place in National League Rookie of the Year voting. 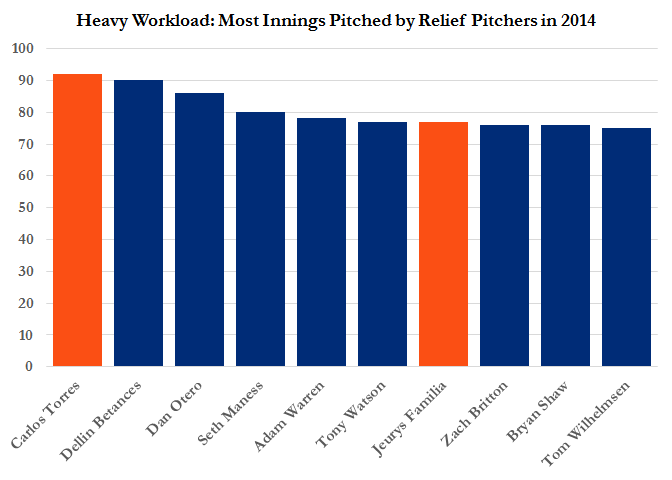 The Mets will head into the 2015 season with arguably the most talented bullpen they have had in years. Bobby Parnell, whenever he returns, is the elder-statesman of the group, while the incumbent closer is another starter-turned-reliever in Jenrry Mejia. While those are both solid options, it is Familia who has the best stuff of anyone in the Mets' bullpen. He sits at 96 miles per hour with his power sinker, often pumping it up to 99 to get a key swing-and-miss. He throws a four-seem fastball at similar velocities, as well as a nasty slider that often has the SNY commentators raving, but it is his sinker that makes him such a weapon.

Familia certainly looks the part of a closer, and the 25-year-old shows much more composure on the mound than Mejia, but the most likely scenario is that Familia ends up holding down the primary setup role once again. It would not be surprising to see Familia's strikeout rate improve in his second full season, as he has the repertoire to put batters away at an even healthier clip. His control could also stand to improve, which would go a long way in making him an elite reliever. There are some signs of regression, though, mostly in the form of his .264 BABIP and an xFIP that was more than a full point higher than his ERA. Staying healthy is also a concern for pitchers who rely heavily on sliders, and Familia throws his roughly a quarter of the time. If everything comes together and Familia is able to take the next step in his growth process, he could turn into the kind of valuable bullpen asset the Mets have lacked for a long time.