A slow start in 2014 led d'Arnaud to a June detour to Las Vegas, which ended up resuscitating his season. Now pegged as a potential breakout candidate in some places, can the catcher make good on his top shelf talent?

Since arriving from the Blue Jays in the R.A. Dickey trade in December 2012, the expectations for Mets catcher Travis d'Arnaud have been exceedingly high. Tabbed as the key return, d'Arnaud's stay with the organization hit a speed bump when he injured his foot early in 2013. Things only got worse in 2014 when he was demoted to Las Vegas in June after muddling through the first two months of the season. How he ultimately handled the demotion looks like a potential turning point in his career. Entering 2015, d'Arnaud appears to be on the verge of a breakout season at the plate, one that could see him realize his potential as a key cog for a contending Mets team.

Through June 6 last year, d'Arnaud was hitting a meager .180/.271/.273 after taking an 0-for-3 in the Mets' game against the Giants. The catcher would be demoted to Triple-A Las Vegas the next day, where he made some adjustments. Hitting coach George Greer had d'Arnaud move his back foot closer to home plate, giving him a better ability to reach the outer part of the strike zone. The changes helped immediately, as he hit a blistering .436/.475/.909 for Vegas before getting the call back to New York on June 24. Through the end of the season, d'Arnaud hit at a strong .272/.319/.486 clip with 10 home runs, 19 doubles, and 3 triples. 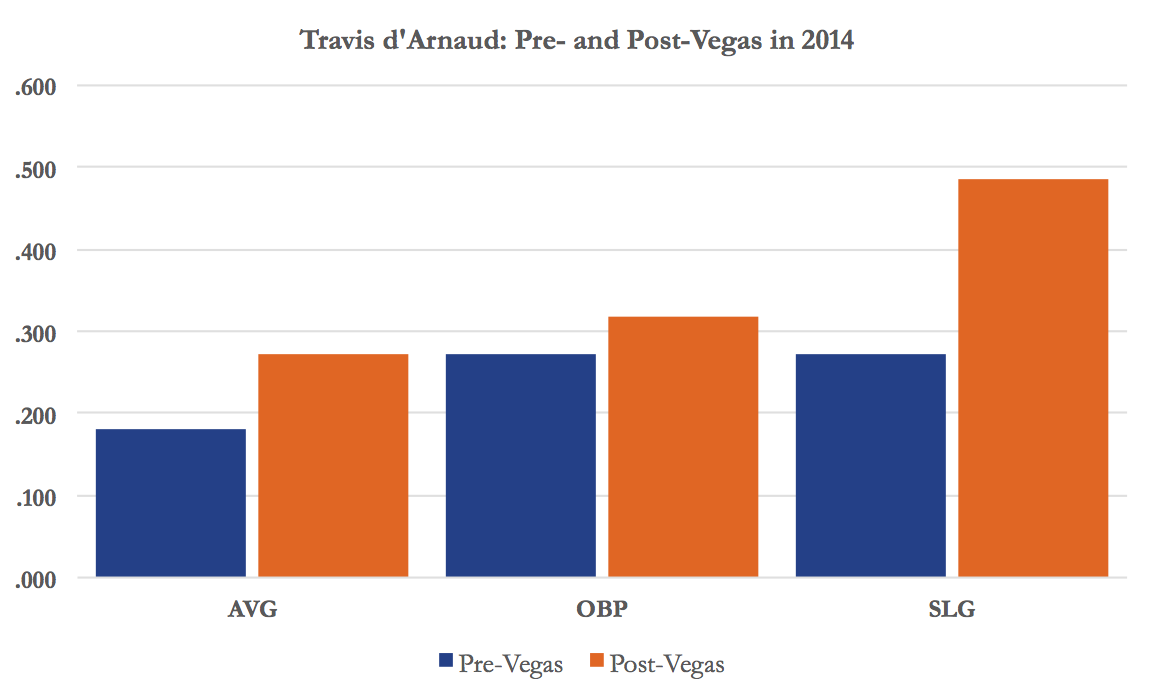 Looking ahead, d'Arnaud appears poised for a breakout campaign. That's according to Eno Sarris, who posited that the Mets catcher could be this season's version of Reds catcher Devin Mesoraco. While we'll have to wait and see if that comes to fruition, d'Arnaud's injury history shouldn't be overlooked just yet. He was mostly healthy in 2014, save for a short DL stint due to a concussion after taking an Alfonso Soriano backswing to the head in May. He was also shut down late in September due to bone chips in his elbow, an issue taken care of surgically in October. Another concern was erratic throwing, which may have been affected by those bone chips. While d'Arnaud thrives framing and receiving pitches behind the plate, his blocking and throwing are two areas defensively that he'll need to improve upon this year.