With a significantly reduced role, how will the infielder fare in what appears to be a make-or-break season for him in New York?

With the Mets moving forward without signing a shortstop in the offseason, it looks as if it will be Wilmer Flores getting the job full-time once the regular season begins. But wait! The Mets have another infielder that could play shortstop: Ruben Tejada. So why is Tejada still with the club if the team is moving forward with Flores at short? Well, that's the big question. Maybe the best way to answer it, at least for now, is that the native of Panama will be utilized mostly as a pinch hitter/defensive replacement and to spell Flores—and Daniel Murphy at second—over the course of the year. Or when Jon Niese pitches.

Let's talk about numbers, which weren't particularly good and contributed to the head-scratching among fans behind the decision to sign Tejada to a one-year deal to avoid arbitration rather than letting him leave. In 419 plate appearances last year, Tejada hit .237/.342/.310. Those are stats that don't really make major league pitchers shake in their cleats. In comparison, Flores hit .251/.286/.378 in 145 fewer plate appearances. 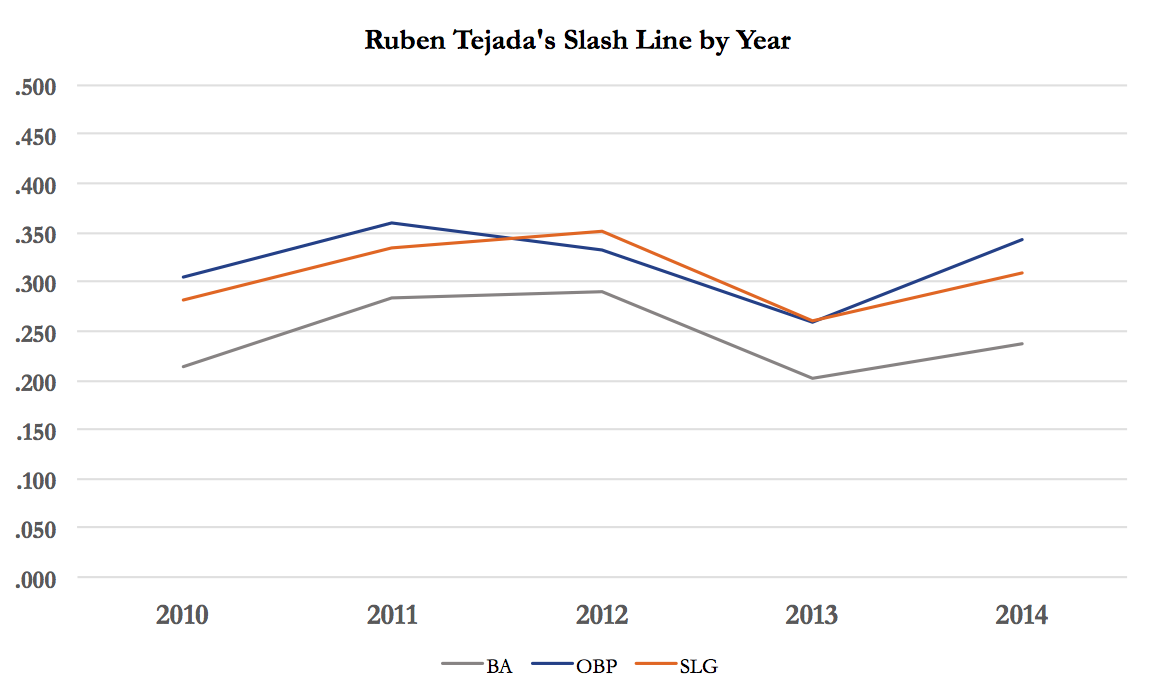 So Tejada's batting average and slugging—which is heavily reliant upon his average since he has little power—did not live up to his 2012 production, though his on-base percentage was higher than it was that year. And while his numbers were still not great, Tejada bounced back following a downright awful year at the plate in 2013. He also committed just eight errors in 939.1 innings at short, or one about every 13 games, which isn't bad by any stretch of the imagination.

To answer the question about why Tejada is still with the team: The Mets probably feel that he can still return to, in some form, his production in 2012 and also believe that he has something to bring to the table defensively. The hope is that his best years are not behind him, but if 2015 doesn't work out, Tejada's time in New York could very well come to an end.