Can Vic Black take a step forward in 2015, or will his historic control issues hold him back?

Vic Black spent very little time on the Mets' roster in 2013, the year he was acquired from the Pittsburgh Pirates in the Marlon Byrd trade. He made his Mets debut on September 2 that year and proceeded to toss 17 fairly effective innings out of the bullpen. His biggest Achilles heel—control problems that seemingly stemmed from a quirk in his delivery—hadn't manifested itself in his cup of coffee, and many were wondering if Sandy Alderson had acquired a possible heir apparent for incumbent closer Bobby Parnell.

After a disappointing spring training in which he allowed 13 hits, 10 walks and a hit batsman in 9.1 innings, Black was sent down to Triple-A Las Vegas to begin the 2014 season. The Texan flamethrower began the season as Wally Backman's setup man, but by early May, had been moved into the 9th inning. Through his first 17 games, Black posted a 1.45 ERA in 18.2 IP with 7 saves. He struck out nearly a batter per inning (18), but thanks to his control issues, nearly walked a batter per inning (17), resulting in batters hitting a Jekyll-and-Hyde .194/.370/.274 off of him.

The Mets promoted Black to the major league roster on May 24, 2014, adding the right-handed reliever as a 26th player for a doubleheader. Though he did not actually pitch, Black was kept on the roster. He made his season debut with the Mets a few days later. The 26-year-old threw one-and-one-third innings against his former team, allowing a hit, striking out two, walking two, and getting the win. For the rest of the season, he was used primarily as a middle reliever, with 6 appearances in the 6th inning, 13 in the 7th, 12 in the 8th, 8 in the 9th, and 2 in extra innings.

Control issues are at the heart of what is keeping Black from reaching his full potential. Shortly after he joined the Mets, it was apparent that Black pounds his pitching hand into his glove as he begins his windup, forcing his arm to catch up to the momentum of his body. As Alex Nelson explained at the time, "it's difficult to time, and sometimes the rest of the delivery will fall apart as a result, particularly his glove side, which will sometimes jerk down, which can impact command." 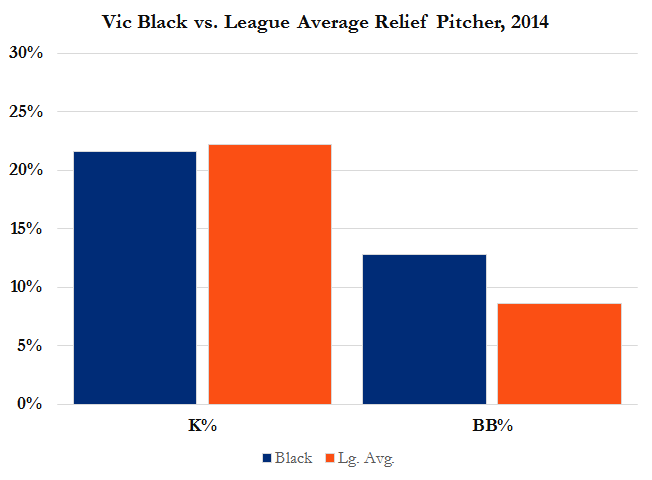 Black had success in the upper levels of the minor leagues despite the quirk in his delivery because of his ability to strike batters out at an elite level. In 60 innings at Double-A, he was able to maintain a 2.93 strikeout-to-walk ratio even with a rate of 4.4 walks per nine because of his rate of 12.8 strikeouts per nine. In 65 innings at Triple-A, he was able to maintain a 2.13 ratio despite 5.3 BB/9 because of his 11.2 K/9. And in 51.2 major league innings, Black has walked 4.9 batters per nine but struck out 8.3, resulting in a 1.68 ratio.

We would all like Black to take that next step and trim down the amount of free passes he issues to batters in 2015, but were it as simple as that, it is likely that Vic himself or one of his many pitching coaches would have modified his mechanics to make them more repeatable. As Trevor Bauer—a case study in pitcher mechanics—put it, "trying to overwrite 10 years of neuromuscular programming in four or five weeks" is difficult...when stuff goes awry...it's hard to focus your mechanics, so [you drift] back into old habits."

Unless Black somehow learns to better control his pitches, it is unlikely that he ever be used as more than a solid middle reliever, despite having the physical tools and mental attitude to possibly be more.