After showing improvements in 2013, Morris took a leap forward developmentally in 2014. Can he keep it up?

The U.S. Virgin Islands were acquired from the Kingdom of Denmark in March 1917 as a result of the Convention between the United States and Denmark for cession of the Danish West Indies. Since then, a total of eleven Virgin Islanders have appeared in a Major League Baseball game. Of those eleven, only one was a pitcher: Al McBean, a right-handed reliever with the Pittsburgh Pirates, San Diego Padres, and Los Angeles Dodgers between 1961 and 1970.

Akeel Morris, in fact, has a lot in common with McBean. Both are right-handed pitchers, former starters pitching primarily out of the bullpen. Both attended Charlotte Amalie High School in St. Thomas, though when McBean attended in the 1950s, he was forced to play little league baseball at a local Catholic school, because Charlotte Amalie High School didn't field a baseball team. Both were position players for the majority of their formative baseball years, only becoming pitchers near the end. Like McBean, Morris has a live arm that features an electric fastball with good sink. Both enjoy the thrill that comes with being on the mound in front of large, passionate crowds—McBean primarily in Pittsburgh and Morris primarily in Brooklyn. If all goes well, Morris can have a career like McBean, the 1964 Sporting News Fireman of the Year.

The Mets drafted the 17-year-old Morris in the 10th round of the 2010 draft with the 302nd overall pick. He was assigned to the Gulf Coast League Mets, where he pitched 24.2 innings to close out the year. Morris spent the next two seasons with the Kingsport Mets of the Appalachian League, the first of which was successful, while the second was considerably less so. In all three years of rookie ball, Morris established a few facts about himself: Thanks to a max effort delivery, he had an electric fastball that went where it wanted, resulting in a high strikeout rate (10.9 K/9) and a high walk rate (6.1 BB/9).

In 2013, Morris was promoted to the Brooklyn Cyclones, the Mets' Short-A affiliate. Before the season began, during extended spring training, Morris spent time working with Miguel Valdez, Brooklyn's pitching coach, on his pitching mechanics. He then had the best season of his brief minor league career up to that point with the Cyclones. Still shuttling back and forth between starting and relieving, Morris posted a 1.00 ERA in 45 innings. Both his strikeout rate and walk rate improved (12 K/9 and 4.6 B/9). 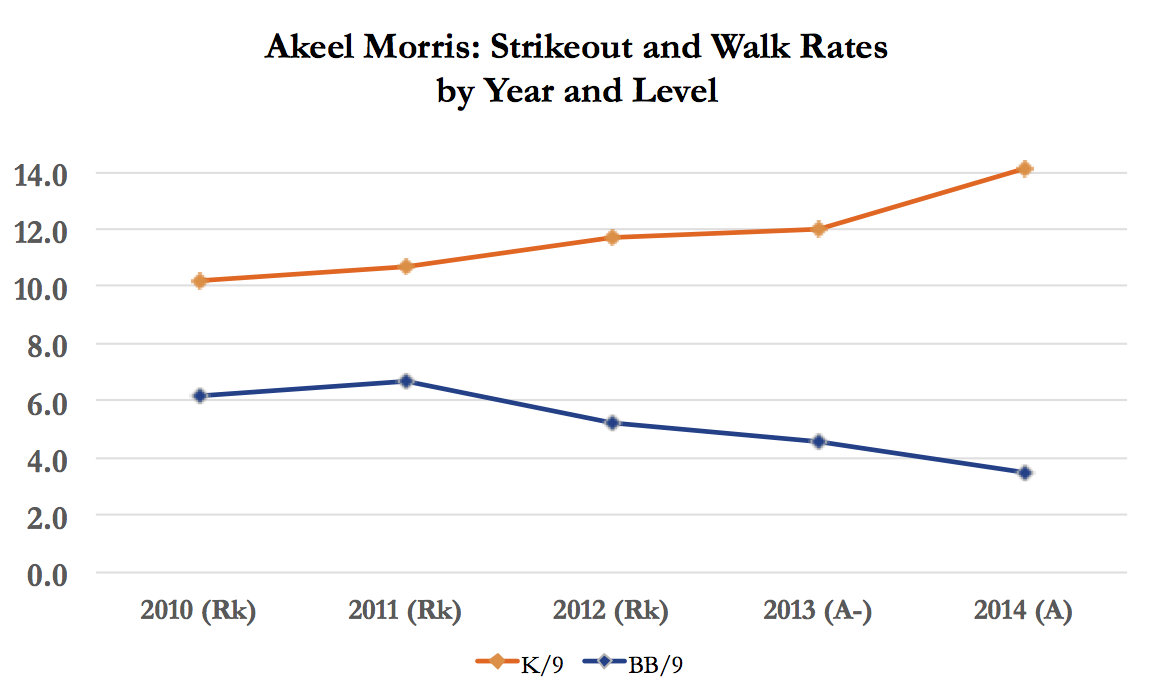 Despite the improvements in the stat line, Morris still sported a major red flag in the form of his delivery. As Jeff Paternostro described it, "He gets every ounce of torque and arm speed he can out of a small frame, but pays for it with an arm that drags way behind his lower half, forcing him to lean back towards first and land quite stiffly. He has a lot of trouble repeating this delivery and misses armside and up (high and tight to right-handed batters) frequently. Over-correction can lead to a late release point and his pulling the fastball glove-side and down."

In 2014, the 22-year-old was assigned to the Mets' Single-A affiliate, the Savannah Sand Gnats, and the work he put in over the offseason paid major dividends. In just his second game, he set the tone for his season by striking out nine of the ten batters he faced. Of the 41 games he appeared in, he allowed earned runs exactly twice: one to the Lexington Legends on May 25 and three to the Charleston RiverDogs on July 1. Utilized primarily as a middle reliever in Sand Gnats' first half, Morris was moved into the ninth inning to serve as closer in the second half. For the season, Morris posted a 0.63 ERA in 57 innings with 16 saves. The mechanical adjustments that he implemented boosted his strikeout rate (14.1 K/9) while lowering his walk rate (3.5 K/9). Those numbers landed him on the South Atlantic League All-Star Team and won him a New York Mets Sterling Award.

In addition those adjustments helping Morris's control, they also improved his pitches. His fastball, which sat in the lower 90s earlier in his career, was now sitting 93-95, and touching 97. His changeup, which had been a bit fringier in years earlier, was coming out of his hand with the same angle and speed as his fastball and had more life on it. His slider, which he began throwing in 2013, was developing nicely, and was turning into a swing-and-miss pitch—even though it was in the strike zone as often as it wasn't.

In early November, the Mets added Morris to their 40-man roster to protect him from being selected in the Rule 5 draft. Given his age and experience, he will likely be assigned to the Mets' High-A affiliate, the St. Lucie Mets of the Florida State League. Normally, I would be wary of getting excited over a 23-year-old relief prospect in High-A ball with as many red flags and/or question marks around as Morris has, but it is important to keep in mind that Morris is likely much rawer and slower in his baseball maturation than most other 23-year-olds. He was a shortstop as a youngster in high school and did not start appearing exclusively as a pitcher until near the end of his time there. In addition, the organization only recently decided on making Morris a reliever, having previously shuffled him between the starting rotation and the pen. With the graduation of other prospects in the system and sustained improvements, Morris's standing in the organization could take a leap forward in 2015, moving him from a fringe prospect territory to something much firmer.