Wilmer Flores might be the biggest question mark among Mets position players heading into 2015.

There might be no statement that better summarizes the polarizing nature of the Mets’ offseason than this: "Wilmer Flores will be the Mets’ starting shortstop in 2015." Love it or hate it, it’s true. The million-dollar (er, league-minimum-dollar) question, of course, is whether Flores will be able to hack it this year, both offensively and defensively—because at this point, the evidence is too limited to say for sure either way.

Here we are, then. What can we expect from Wilmer Flores in 2015?

Several things are working against Flores. First and foremost, perhaps, is the fact that he is more a position-less infielder than a "true" shortstop. In fact, he was only recently reassigned to shortstop by the same organization that, several short years ago, had decided he did not have the chops to stick there. Put another way, the Mets shifting Flores back to shortstop is less about his shining ability at the position than it is about a dearth of acceptable (read: cheap, not horrible) alternatives. None of that circumstantial flotsam will dictate his performance this year, of course, but it isn’t terribly encouraging.

Another important question mark is Flores’s bat. While he has a strong track record of hitting well in the minor leagues, he has yet to duplicate that success over a particularly meaningful stretch at the major league level and is no sure thing to that end. Granted, his overall line in 274 plate appearances last year—.251/.286/.378, 88 wRC+—was an improvement over his 2013 debut; but "improvement" in this case isn’t synonymous with "good."

There are, however, several encouraging points to consider. Although "the eye test" is really just a euphemism for a person’s subjective, biased opinion of how they think a player looks in the field, Flores appeared to pass it in his (relatively limited) playing time at shortstop last year. What he lacks in lateral range he seems to somewhat compensate for in positioning, soft hands, and a strong throwing arm. He also knows how to play the position—a fact that should not be overlooked. Other positives are that Flores is still very young and appears to be a hard worker; therefore, he could conceivably improve with more reps, a la Daniel Murphy at second base in recent years. In sum, he really could be passable out there. 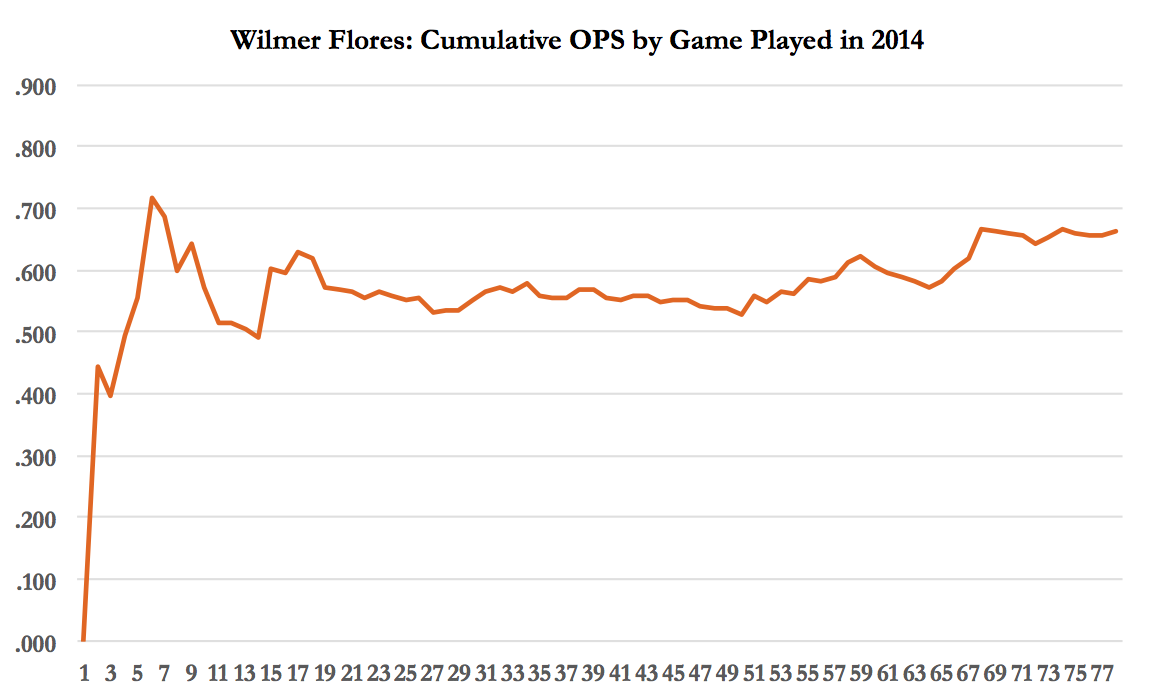 The big potential "plus" with Flores, though, has been, is, and always will be his bat. Flores has flashed strong upside potential with the lumber since his early minor league days, and he availed himself nicely at each successive level against mostly older competition. Given that he has never shown a propensity for taking walks, his on-base acumen hinges on his ability to make good contact and drive the ball; fortunately, he has the power to do just that.

The best-case scenario for Flores this year is probably passable-if-below-average shortstop defense and offensive output that more or less evokes his minor league track record. If he can do that, he will contribute as a net-positive. The worst-case scenario involves a lot of weak contact at the plate, a lot of dives-and-misses in the field, and, ultimately, more of Ruben Tejada than most of us want to see.

Flores has the ability to get it done, but there is, as we know, a huge gap between ability and production. Let’s hope he bridges it short order and makes us all forget that shortstop was ever a question mark heading into the 2015 season.