New York Mets 2015 Season Preview: What to expect from the Mets this year

An overview of the season ahead.

Share All sharing options for: New York Mets 2015 Season Preview: What to expect from the Mets this year

Coming off a 79-win season, the Mets are finally expected to be competitive in 2015. While the Nationals are the heavy favorites in the National League East, the Mets compare favorably to many other teams in the league, and given the relatively low bar for contention that is the second Wild Card, it’s not too far-fetched to see the Mets making some noise in the playoff race this year, even without Zack Wheeler.

The Mets’ roster looks very familiar heading into the 2015 season. While the team signed Michael Cuddyer to a two-year, $21 million contract every early in the offseason—and surrendered its first-round pick in the amateur draft this year to do so—it added only one other major league player: John Mayberry Jr.

In the Rule 5 draft, the Mets also brought in left-handed relief pitcher Sean Gilmartin, though there is no guarantee he will make the team’s Opening Day roster. If he does not, the Mets must offer him back to the Minnesota Twins, the team from which they took him in that draft.

DePodesta is excited about what the Mets have produced internally already and what's on the way in the future.

The Amazin Avenue minor league team weighs in on this year's top 25 prospects in the Mets farm system.

The Mets lost a few players following last season, too. Bobby Abreu, who had a couple of stints with the team, retired, and Daisuke Matsuzaka signed a contract to return to Japan. Catcher Juan Centeno was claimed on waivers by the Brewers, first baseman/outfielder Andrew Brown was claimed off waivers by the A’s, and Eric Young Jr. was signed by the Braves after the Mets non-tendered him.

On top of that, Logan Verrett was taken by the Orioles in the Rule 5 draft, and the Mets traded Gonzalez Germen to the Yankees for cash considerations. Since then, Germen has been waived and claimed a bunch of times. Gone, too, are Dana Eveland, who had a nice year for the Mets in 2014 and signed a minor league deal with the Red Sox over the winter, and Josh Satin, who saw time in the big leagues with the Mets in 2013 and early in 2014, was let go this winter before signing with the Reds on a minor league deal.

The Mets’ starting rotation should still be a strength this year, though things would have looked better if Zack Wheeler weren't heading for Tommy John surgery. But with Matt Harvey back from his own Tommy John surgery, reigning National League Rookie of the Year Jacob deGrom, Jon Niese, Bartolo Colon, and Dillon Gee the likely starting five to begin the year, the rotation can still be a strength—it just might be a little top-heavy.

The ceiling for the rotation gets higher if and when the Mets turn to any one of Noah Syndergaard, Steven Matz, or Rafael Montero early in the season. Pitchers like Matthew Bowman and Gabriel Ynoa might earn a shot at the big league rotation in the not-too-distant future if things go well for them in the minors, too. Pitchers get hurt, but if there's one thing the Mets should be able to handle this year, it's covering for injuries in the starting rotation.

Under Sandy Alderson, the Mets’ bullpen has mostly been awful. It started last year that way, too, but after Jose Valverde and Kyle Farnsworth were jettisoned—and despite the absence of Bobby Parnell—the bullpen improved pretty significantly. Jenrry Mejia, who began last year as a starting pitcher, wound up in the bullpen and did very well there. Jeurys Familia, a starter in his minor league career, blossomed into an above-average major league relief pitcher. And Carlos Torres turned in his second straight season of good work out of the bullpen.

Vic Black had a good year in terms of ERA in 2014, though his strikeout rate wasn’t exceptional, and his walk rate was very high. He had some shoulder discomfort recently, too, but his MRI results came back clean. If he can cut down on walks, which was what Torres did after joining the Mets for the 2013 season, Black could be very good. 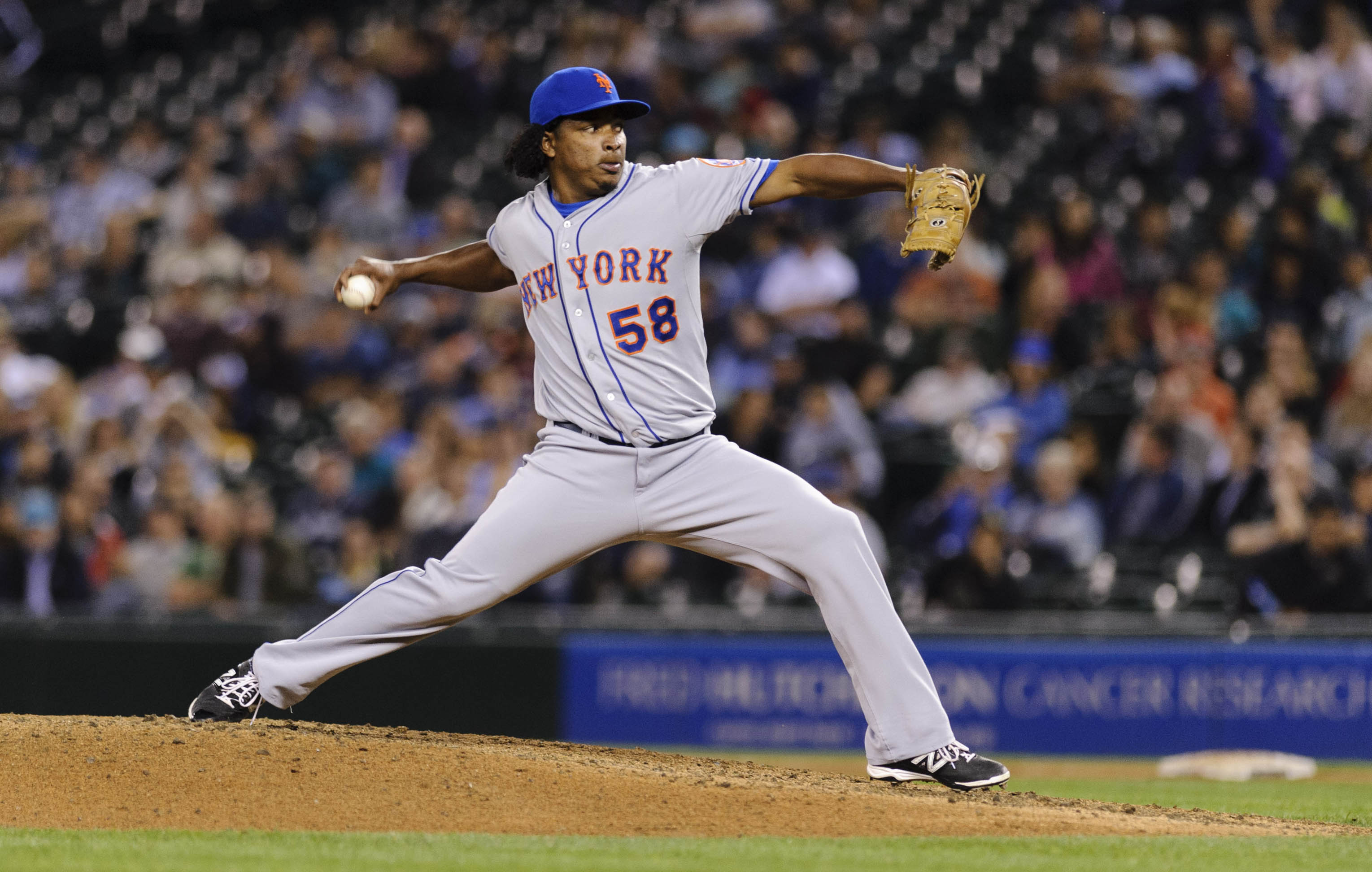 Coming into spring training, lefty Josh Edgin was going to be a part of the team’s bullpen, too, but he is set to undergo Tommy John surgery and will miss the entire season. That leaves the Mets with a few left-handed relief pitchers in camp but no clear candidate to take fill the vacancy created by Edgin.

The aforementioned Parnell should be back sooner than later, though it would make sense for the team to give him as much time as he needs to come back from Tommy John surgery without risking re-injury.

All of that leaves three spots open in the ‘pen until Parnell is ready. General manager Sandy Alderson recently suggested it would be very unlikely for the team to begin the year with an all-right-handed bullpen, which means one of the lefties in camp—Scott Rice, Dario Alvarez, Jack Leathersich, or Sean Gilmartin—or a lefty from minor league camp or outside the organization will probably be claiming one of those slots. The Mets have been scouting Orioles lefty Brian Matusz, a desirable target, and some other lefties might become available late in spring training if they don't make other teams' rosters.

Minor league pitchers Erik Goeddel and Cory Mazzoni could make bids for those last two spots, or the team could turn to Rafael Montero as a relief pitcher rather than have him start in Vegas to begin the year. Hansel Robles excelled as a relief pitcher last year in Double-A Binghamton, but he has not yet pitched above that level.

If the Mets end up contending this year, they will probably have gotten decent production out of their hitters. If healthy, most of the team’s eight starting position players seem to be decent bets to produce at the plate.

The team’s most veteran hitters—Michael Cuddyer, Curtis Granderson, David Wright and Daniel Murphy—will have to hit for the Mets to stay relevant. Cuddyer hit well when he played but was hurt for much of last season, Granderson had a decent, but not great, year at the plate, Wright had one of his lesser seasons as a big league hitter while also dealing with a shoulder injury, and Murphy was Murphy, which is not a bad thing. So there are no guarantees here, but it’s probably fair to say these four hitters should put up more overall production than they did last year. And after Mets left fielders put up an atrocious line at the plate in 2014, Cuddyer should at the very least pull those numbers up significantly. 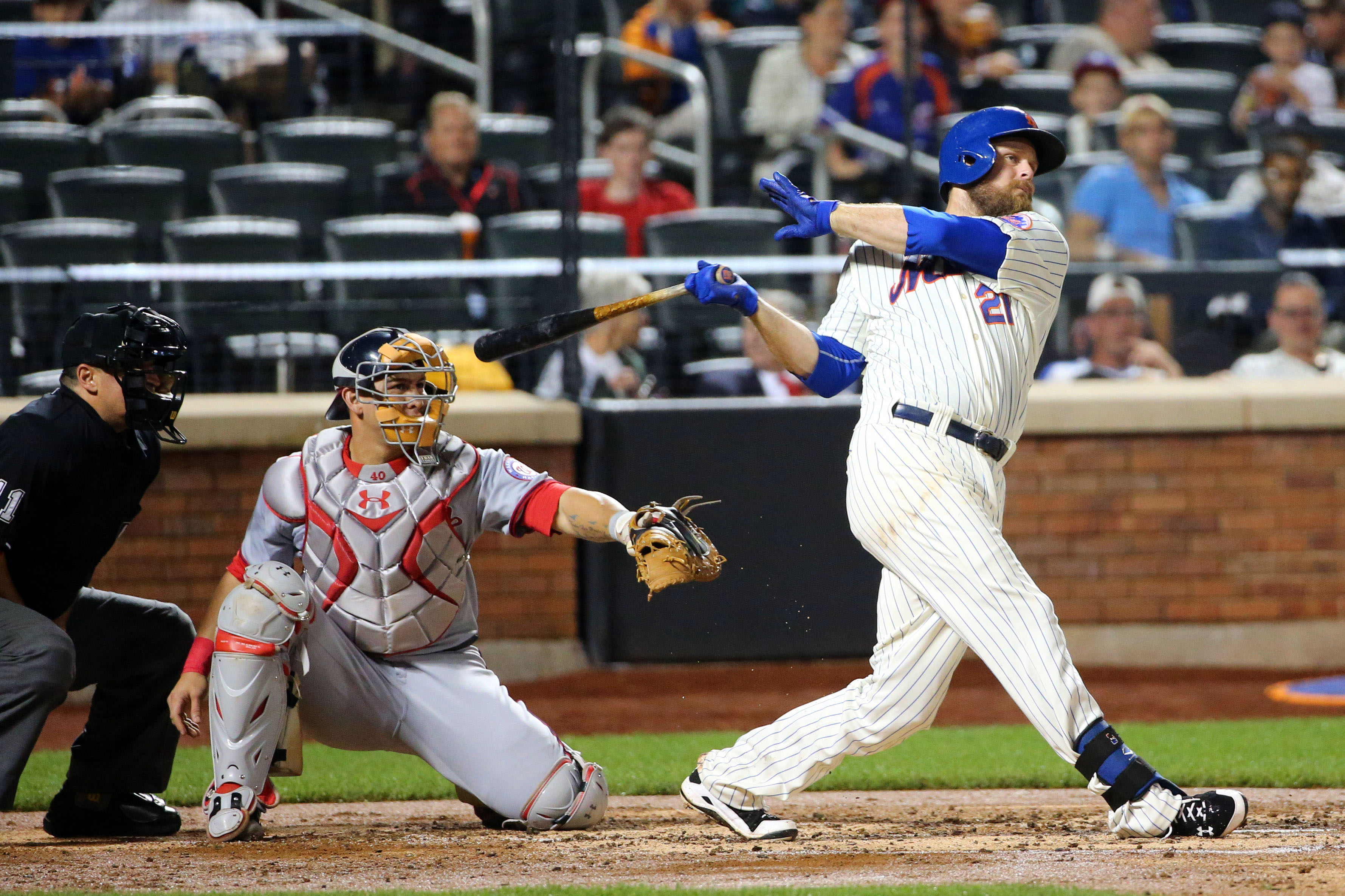 As for the rest of the team’s starters, Lucas Duda had a breakout season last year, and his home run power should be an asset. He hasn’t hit left-handed pitching at all in the big leagues, but that’s where Cuddyer and Mayberry can help the Mets, assuming Duda is on the bench.

That leaves the three seemingly-unknown quantities: shortstop Wilmer Flores, center fielder Juan Lagares, and catcher Travis d’Arnaud. Flores has not spent enough time in majors to make any conclusions about what sort of hitter he is, but his defense figures to be limited at short. Lagares and d’Arnaud were both valuable players last year, Lagares primarily because of his glove and d’Arnaud with a combination of pitch framing and a strong showing as a hitter after a short stint in Triple-A Las Vegas in June.

Add it all up, and the Mets’ lineup is not likely to lead the league in runs scored per game, but there’s enough there for a respectable offense unless a couple of starters miss significant time during the season. If the pitchers perform near expected levels, that sort of production should keep the team afloat.

The Mets’ farm system is strong as the season begins. Highly-rated by several prospect-focused publications this winter, the system is more balanced between pitchers and position players than it looked a year ago. The team’s top two prospects, though, are still pitchers: righty Noah Syndergaard and lefty Steven Matz. In our list of the team’s top twenty-five prospects for the year, outfielder Brandon Nimmo ranked third. Here’s what our writers had to say about those three players:

"Simply put, the 22-year-old Syndergaard has evolved into the near-ideal package of size, stuff, and polish that clubs dream about when they draft pitching prospects. He features the rarely seen combination of electric, top-tier stuff and excellent command that allows scouts to comfortably project a future number one who could contend for Cy Young awards. It's not a profile that comes along often, but that's what we're dealing with here." —Rob Castellano

"I’ve been consistently high on Matz for years now, and it’s a great feeling to see the young southpaw not only deliver, but dominate. His final start in the playoffs was one of the most exciting baseball moments I had in 2014. With a little refinement on his offspeed pitches, the Mets could have something very special on their hands. Who needs a 2009 first-round draft pick?" —Steve Sypa

"Nimmo broke out in a big way in 2014, earning a mid-season promotion to Binghamton after leading the Florida State League in on-base percentage and finishing second in OPS. He struggled a bit after his promotion but still managed to finish at .238/.339/.396 against largely older competition. Surprisingly, he hit for more power after his promotion, posting a .158 isolated slugging in Binghamton versus .137 in High-A." —Greg Karam

Recent Vegas odds had the Mets at 28/1 to win the World Series. At the time of this writing, PECOTA, the projection system published by Baseball Prospectus, pegged the team to win 83 games this year. Both of those numbers were generated before the Wheeler injury.

While the Nationals are everyone's pick to win the division, the Mets' only other competition in the NL East figures to be the Miami Marlins. With the Braves clearly rebuilding—their outfield downgraded significantly—and the Phillies attempting to do something sort of like that, the division features a couple of teams the Mets should be able to feast upon. They have to actually win the games, of course, but the Mets—and Marlins and Nationals—should have a leg up on teams from the league's other two divisions in the Wild Card race simply because they get to play so many games against Atlanta and Philadelphia.

What makes a successful year

Basically, the Mets' season goes well this year if the team stays mostly healthy. That understandably sounds like a pretty big 'if' just a day after Zack Wheeler learned he would miss the entire season. It would help if the best minor league pitchers stepped up and pitched at an above-average level, whenever they end up getting the opportunity to do so. Things probably go down the drain with a one or two more major injuries.

A return to the postseason would unquestionably make the season feel like a success. While there's disappointment in anything short of a World Series title in any season, the notion of the Mets playing exciting games in mid-to-late September is appealing. There won't be a ticker-tape parade for just missing out on a Wild Card spot, but it's been a long time since the Mets last posted a winning record.

Among Amazin’ Avenue authors, the average prediction for Mets wins this year is 85, two higher than PECOTA projects. Again, the tally was taken before the bad Wheeler news, but we're a little on the optimistic side.