A series of nagging shoulder injuries have plagued Jon Niese the last two years but he claims to be pain-free as he enters 2015 as one of the veterans of a pitching-rich staff.

It might be a stretch to say that 2015 is a make-or-break year for Jon Niese, but with a rotation stacked full of talented hurlers and more on the way, it certainly is an important season for the 28-year-old. Rafael Montero, Noah Syndergaard, and Steven Matz are just a few young phenoms who are pounding on the door in Queens. With three rotation spots securely held by Matt Harvey, Zack Wheeler, and Jacob deGrom, Niese needs to prove to the Mets that he can be counted on as the one southpaw in the rotation.

Third in tenure on the club behind David Wright and Daniel Murphy, the left-hander's final numbers were solid in 2014. Niese set a career-best in walks per nine innings (2.2), and with 187.2 innings pitched, he was second only to Bartolo Colon among Mets pitchers. He also reached 30 starts for the third time in five years but as is often the case with Niese, he seemed to leave the Mets wanting for more. Despite needing two MRIs on his left arm during spring training, Niese sported a 2.88 ERA through his first 16 starts, though his 3.51 FIP was not quite as impressive. On the night of July 4, Niese left his start in the first inning after being hit by a line drive, and he was placed on the disabled list three days later with a seemingly-unrelated left shoulder strain. 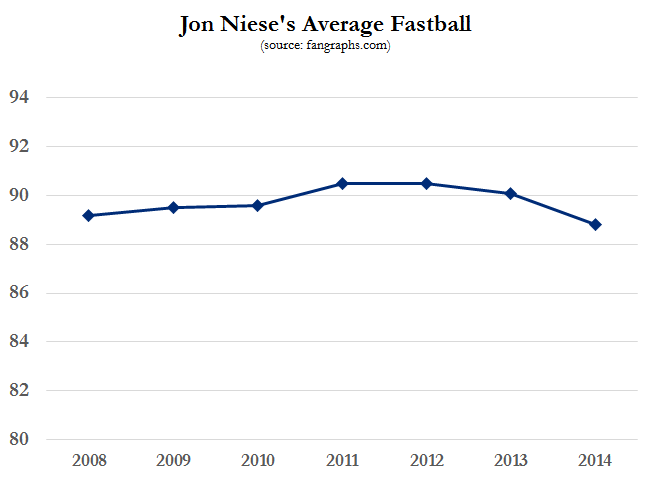 The Mets are penciling Niese in for 30 starts and close to 200 innings again in 2015, numbers he should be able to reach if healthy. In addition to his shoulder problems, Niese left his last start of the year with an elevated heart rate for the third time in four years. Despite his claims he is pain-free and ready for the season, his continuing health issues are a red flag that bears watching.