The veteran relief pitcher is set to return from Tommy John surgery in the early part of the season.

Bobby Parnell has been around for a while. Drafted by the Mets in the ninth round of the 2005 draft, the hard-throwing righty spent the grand majority of his minor league career as a starting pitcher but debuted in the big leagues in the Mets’ bullpen in 2008. Aside from an eight-start experiment late in the lost 2009 season, his first full year in the big leagues, that’s where Parnell has remained as a professional pitcher ever since.

Parnell was pretty good that year, improved greatly in 2010, and took a step back in 2011. In the following two seasons, he was nothing short of excellent. Parnell had a 2.35 ERA in 123 appearances, which ranked 15th among qualified relief pitchers in Major League Baseball over that span, and took over as the Mets’ closer in 2013. While he has always thrown hard, his strikeout rate has never been notable, but Parnell really found success in limiting walks over those two years. 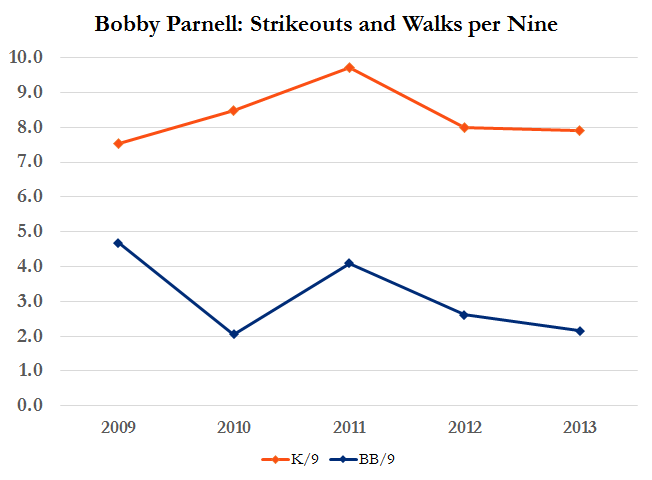 Last year, Parnell’s velocity was down in noticeably, and his season ended after just one appearance, as his right elbow required Tommy John surgery. With that, Parnell joined countless other pitchers in taking a year off from game action. With spring training underway, Parnell is expected to return to the Mets’ bullpen a few weeks into the season, the optimistic side of recovery from the surgery.

Without Parnell, the Mets’ bullpen started the year poorly but developed into a perceived asset once pitchers like Jose Valverde and Kyle Farnsworth were jettisoned and their innings turned over to pitchers like Jeurys Familia and starter-turned-reliever-turned-starter-turned-reliever Jenrry Mejia. With the good pitchers from last year’s bullpen all set to return, whether or not Parnell will get his old closing gig back is a question heading into the season. If he’s healthy and pitching anything like he did, however, he will certainly help the Mets’ bullpen, no matter what his role is.