Goeddel was impressive in his first stint in the big leagues, but his minor league walk rates are reason for concern.

Mets fans got a brief look at Erik Goeddel at the end of 2014, and what they saw should offer some optimism heading into 2015. Following his call-up on September 1, Goeddel appeared in six games out of the bullpen. In 6.2 innings pitched, he ptosted a 2.70 ERA,1.05 WHIP, and 78 ERA- while striking out an average of a batter per inning.

Goeddel was particularly effective against right-handed hitters, holding them to a .071/.235/.071 line. Goeddel's season highlight came in his Citi Field debut on September 11 against NL East champs Washington. In one-and-two-thirds innings of work, he allowed no hits and no runs while issuing a walk and picking up a strikeout. It was one of two scoreless outings he posted against the Nationals.

In the six appearances, Goeddel relied almost exclusively on his fastball, throwing it 70.7 percent of the time, with an average velocity of 93.5 miles per hour. When he threw fastballs, he held hitters to a line of .118/.211/.118, with an 11 wRC+. Despite Goeddel's promising late-season debut, however, last year was not without some worrisome struggles. 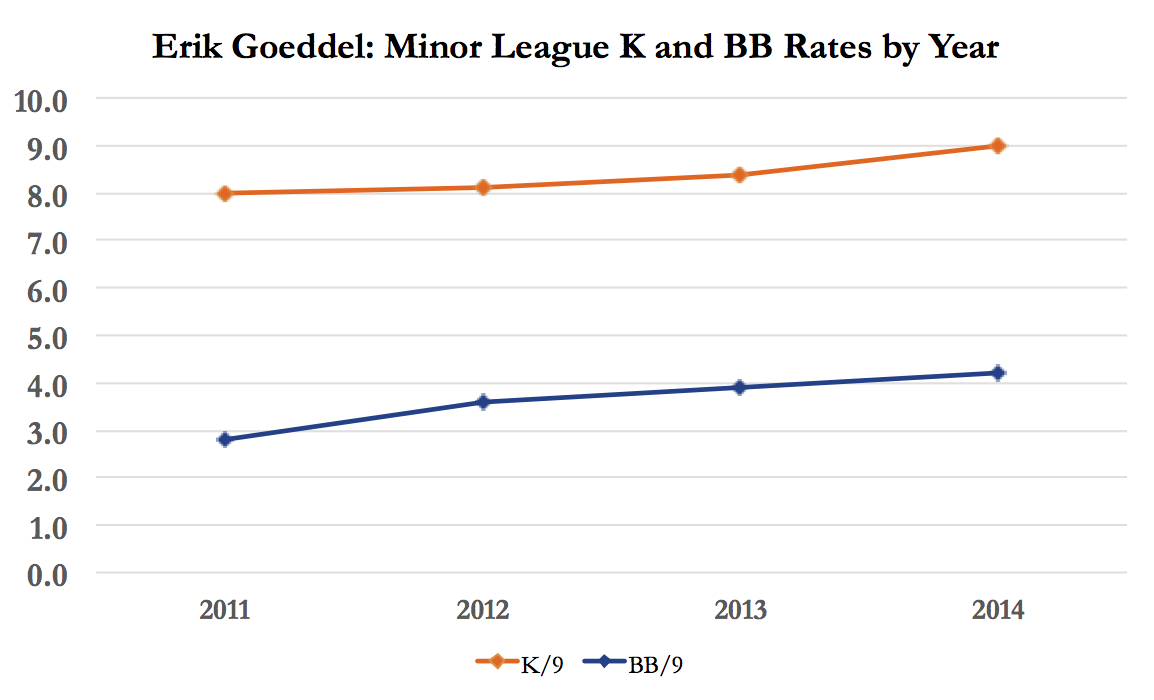 Before his cup of coffee in Queens, the 26-year-old right-hander was inconsistent in 49 relief appearances for Triple-A Las Vegas. He posted minor league career worsts with a 5.37 ERA, 1.68 WHIP, and 4.24 walks per nine innings. It continued a four-season stretch in which Goeddel's control and baserunners allowed numbers worsened as he moved through the minors, beginning with Single-A Savannah in 2011. Over that span, though, his strikeout numbers increased. If he can cut down on the walks, he could be a viable option for the Mets' bullpen this year.