The Mets' top left-handed pitching prospect is on track to join the major leagues sometime this season.

Mets fans are excited to see Steve Matz pitch on the Citi Field mound sometime this season. The 23-year-old left-handed pitcher from Stony Brook, New York is slated to begin the year with the Mets’ Triple-A affiliate in Las Vegas, but his path to the major leagues became a bit clearer with the news that Zack Wheeler will miss the entire season. Last year, Matz dominated the minor leagues with a 2.24 ERA and 2.70 FIP over 24 combined starts between High-A St. Lucie and Double-A Binghamton. He led Double-A Binghamton to their third Eastern League Championship, taking a no-hitter into the seventh inning while striking out eleven batters in the clinching game.

The rising star was selected by the Mets in the second round of the 2009 draft. He had Tommy John surgery in 2010 by New York Mets medical director Dr. David Altchek, who will be performing the same procedure on Zack Wheeler next week. Dr. Altchek created a new way to enhance the Tommy John surgery called the "docking technique", a way to reconstruct the UCL by splitting the flexor-pronator muscle, yet leaving it attached, without removing the ulnar nerve—a quicker procedure with less trauma to the elbow. The SNY video in which Dr. Altchek discusses the procedure in depth features Matz speaking on his experience and can be found here.

Mets catcher Travis d’Arnaud said recently that Matz has ‘obviously’ impressed him this spring training. "He’s got electric stuff. I don’t know if I’d want to get into the box against him. [His fastball has] a lot of life. It comes out of his hand at 95 and stays at 95." 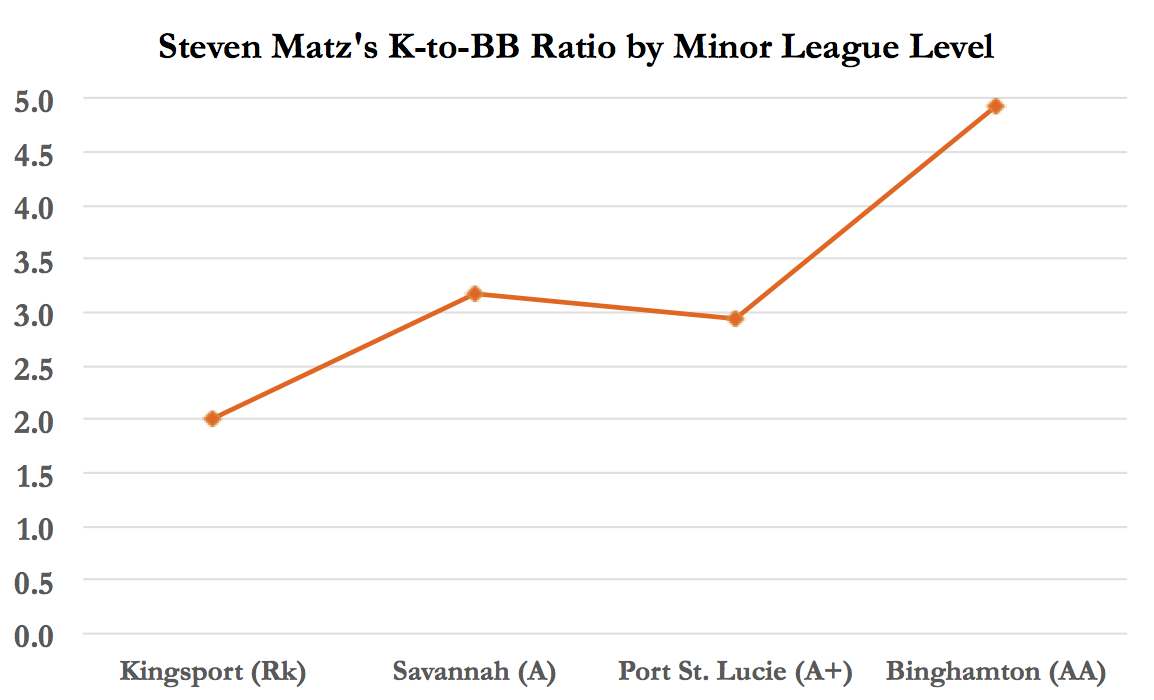 Future Hall of Famer Ichiro Suzuki of the Miami Marlins also praised Matz's stuff after facing him this spring. "When you see a 95 fastball then a 78 curve ball, that’s definitely the stuff of a big leaguer."

Matz’s fastball has topped out at 97 mph, but it typically sits between 92 and 95. Marc Carig of Newsday said that last season, Matz’s changeup developed into a weapon when paired with his fastball, while his curveball (that some had considered a weakness) became a strength.

Our own Steve Sypa says he has been consistently high on Matz for years now, and that it’s a great feeling to see the young southpaw not only deliver, but dominate.

"His final start in the playoffs was one of the most exciting baseball moments I had in 2014. With a little refinement on his offspeed pitches, the Mets could have something very special on their hands."

"After putting himself back on the prospect map in 2013, the 23-year-old stamped his ticket last summer as one of, if not the very best lefthander in all of minor league baseball. His combination of rapidly improving command and a top notch low-to-mid-90s heater from the left side portends a quick transition to the highest levels. His sharpening secondary offerings will ultimately decide how high he climbs."

"I can easily envision a scenario wherein Matz leapfrogs Syndergaard—at least for the near term—much like Jacob deGrom did in 2014. Further, I don't think it's hyperbole to say that Matz could, at times, vie for the top non-Harvey spot in the Mets rotation before all is said and done, and his growing reputation as a big game pitcher certainly won't hurt his chances."

Jeffrey Paternostro appeared on MLB Network last month to discuss some of the Mets’ top prospects, where MLB Network’s Dan Plesac asked him if we are going to hear "Let’s Go Matz!" chants at Citi Field this season. With the way Matz has been pitching, that should come to fruition sooner than later in Queens.